Are the best buffers those that are in a 1:1 ratio with its conjugate acid/base?

I wanted to comment this, but I don't have enough reputation, so I just made this a question. I know that buffers and their conjugate base/acid must exist in similar amounts for the buffer to be effective, so would the buffer be most effective when the ratio is close to 1:1 (of the buffer and its conjugate acid/base)?

Yes, the best buffers are those that are in a 1:1 ratio with its conjugate acid/base, but in a somewhat indirect way; it's because buffer capacity is maximum when $\mathrm{pH}=\mathrm{p}K_\mathrm{a}$, and for that value of $\mathrm{pH}$, the proportion of the acid/base conjugates is 1:1.

(For derivation, check this response to another question)

The maximum of buffer capacity is achieved when $\mathrm{pH} = \mathrm{p}K_\mathrm{a}$, and is

As you deviate from $\mathrm{pH}=\mathrm{p}K_\mathrm{a}$ in either direction, concentrations also deviate from 1:1 (as per Henderson-Hasselbalch) and buffer capacity will fall.

Note that the maximum buffer capacity does not depend on the strength of the acid or base, only on the total concentration of the conjugate system $C_\mathrm{A}=\ce{[HA]}+\ce{[A-]}$.

The buffer capacity is usually used as indication of the 'strength' of a buffer. It is defined as the gradient of total concentration with pH, and is in effect the number of moles of acid/ base needed to change the pH by $\pm 1$. i.e. $\displaystyle \beta = \frac{dC}{dpH}$ and has the form (using concentration instead of number of moles just for simplicity);

Usually the first two terms in $\beta$ are small compared to the last one so the buffer capacity is proportional to the total concentration of the species present which is what is expected as the acid and base act as reservoirs as the pH is changed.

The buffer capacity has the form of a peak near to the $\mathrm{p}K_a$. 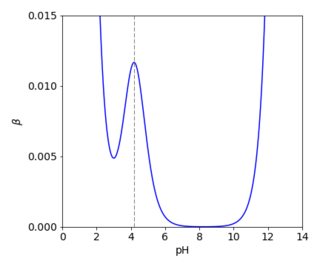 The Henderson - Hasselbalch equation, although it is an approximation, can be used to work out the pH of a buffer solution and in its general form is

so that when the concentrations are not equal the $\mathrm{p}K_a$ and pH differ slightly.

The answer in this post How to set up equation for buffer reaction? gives the derivation of the last equation.

8
How to set up equation for buffer reaction?
10
How does the HCl-KCl Buffer work?

1
Buffers calculating amounts of acid & base
10
Are all solutions of weak acid/bases buffers?
5
Why does a weak acid and a salt containing its conjugate base form an acidic buffer?
3
Confused about weak/strong acids, conjugated acid-base pairs and buffers
1
Am I limited by the pKa value of an weak acid when preparing a buffer solution of it (and its salt)?
0
Buffers: what does the strong base react with?
8
Is there a terminology contradiction about whether the conjugate of a strong acid is a "weak base"?
1
Buffer Solution Problem (Acid/Conjugate Base)
1
Why must a buffer solution contain both a weak acid and a salt solution of its conjugate base?
0
Error with explaination of shape of weak acid strong base titration?