HCl/H2O with alkene: Which one reacts?

I think that the initial step forms a tertiary amine, which then in the presence of the ketone and trace acid undergoes nucleophilic addition. But then, for the $\ce{HCl/H2O}$ in the last step, which one reacts with the double bond in 1G?

organic-chemistry synthesis carbonyl-compounds
Share
Improve this question
edited May 1, 2018 at 10:50

I think the last step is for the Hydrolysis.
After reaction with $\ce{LiAlH_4}$, the amide is reduced to amine and thus when it is reacted with a ketone it forms an imine($1G$) like this below, 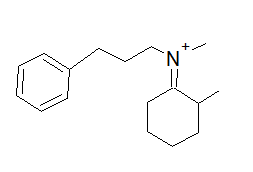 which quickly tautomerises to form the most stable Enamine as this 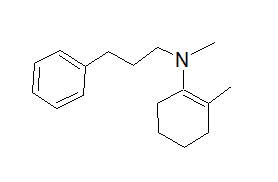 After that when it is reacted with $\ce{CH_3Br}$, the nitrogen's lone pair conjugates and the nucleophilic attack occurs from the adjacent carbon(like Michael addition) with attached methyl group. Thus you have the intermidiate substituted proiduct as,

But this imine is hydrolysed in the presence of $\ce{H^+/H_2O}$ to give you back the original ketone but with an extra methyl group attached to it. So I think your final product $1H$ should be this,

and also you get the amine after hydrolysis which is actually the same as $1F$.

The product in @Soumik Das's otherwise fine solution should be 2,6-dimethylcyclohexanone (4) NOT the 2,2-isomer 7. The enamines (pyrrolidine, piperidine, morpholine) of 2-methylcyclohexanone 6 are more stable as structure 1 rather than structure 2. The methyl group in enamine 1 is undoubtedly axial to avoid the A1,3 interaction present in enamine 2. The kinetic alkylation product, imine 3, probably has trans methyl groups but acid hydrolysis will likely equilibrate the trans and cis ketones to the more stable cis isomer 4. This very reaction with a different secondary amine is discussed in Gilbert Stork's 1963 paper. 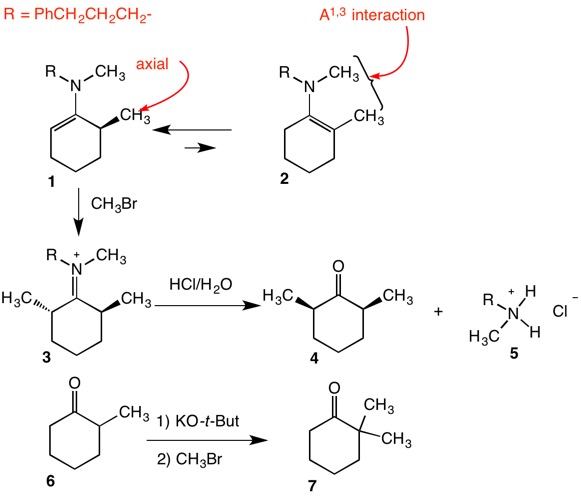 5
Reaction mechanism of a terminal alkene with an anhydride
3
Nomenclature of organic molecules with more than one functional group
3
Bromination Pathways with alkane, alkene, and alkyne substrates
5
Stereochemical outcome after elimination followed by addition
3
Conversion from t-butanol to alkene
3
Malic acid 3-step synthesis
20
ICHO Synthesis Problem 2018
9
Reaction of vinylacetylene (but-1-en-3-yne) with HCl
1
Which alkene reacts faster with HCl?