Why does a molecular sieve work for gas separation?

I was looking at membrane separation of air to nitrogen / oxygen and saw some details on the molecular sieve which on Wikipedia states you can get much higher purity from an adsorber / sieve, but when I look at these images, it doesn't make any sense.

Molecular Sieve material / Zeolite seems to be supplied in granules that are fairly large, why doesn't the compressed gas just go around all the material instead of going through it?

Without melting it / packing it into a solid column, it doesn't seem like it would be much more efficient than just glass beads since there are so many ways to get around each piece. Are you really supposed to just dump it in and have it work? 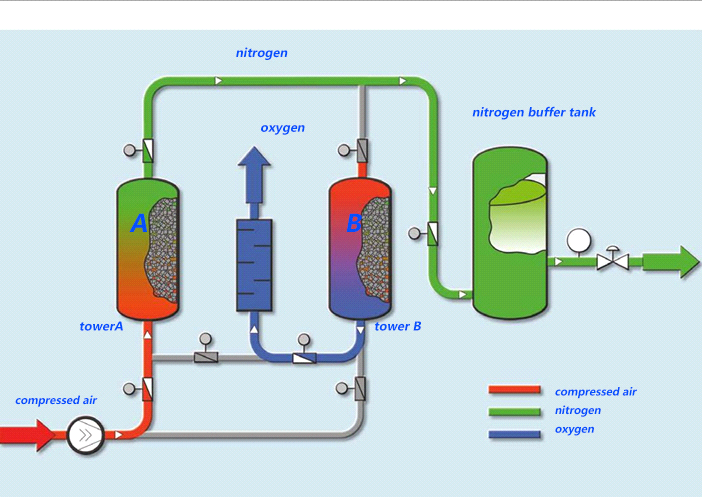 The key overall idea is that sieves are selective in some way about which gases in a mixture get stuck in the sieve and this allows separation. This is a little like chromatography where each component of a mixture partitions differently between the liquid phase flowing through the column and the solid phase. It isn't that it is impossible for the liquid to carry the dissolved compounds straight through the solid phase, it is just that the average speed of flow of a particular component is affected by the different attractions to the solid phase. The net result, if you get the setup right with appropriate flow rates, is that some compounds pass more slowly than others and the end result is some degree of separation.

Molecular sieves are like this too. The two effects combine to make one gas preferentially stick to the sieve and, with the right setup, this allows a degree of separation. One factor is simply the size of the pores in the sieve: some gas molecules pass through the pores easier than others just because of their size. The other effect (the strength of the absorption on the surfaces inside the pores may also matter: some gas molecules are more attracted to the surface than others.

In the case of this particular setup, this allows the separation of oxygen and nitrogen in air if the conditions are right. Strictly it isn't a continuous flow of gas that is being separated (that is why it is called a "pressure swing" apparatus). One vessel containing the sieve is filled with air under pressure. The oxygen is preferentially absorbed onto the pore, leaving the remaining gas very concentrated in nitrogen. When the pressure is lowered the first thing to come out of the vessel is very enriched nitrogen (which is mostly present as gas). As the pressure is lowered further, the oxygen absorbed in the sieve is also released and discarded. If you get the conditions right, this allows fairly pure nitrogen to be produced.

If you need really pure results, you can do this in multiple stages, each stage giving a better separation than the previous one.

I have seen finer zeolites but this one does not seem as coarse as you sounded it. Consider it again, likewise in fractional distillation, there will be some molecules with never being an equilibrium with another phase. However, much more of them will go through zeolites and with the passage of each unit distance and time, you will have more of the compound you want to get and less of the redundant one. If your column is enough long and zeolites are sufficiently fine and ordered, it will be a good purifier.

Try to visualize it in more detail, while some molecules try to pass through the cavities between zeolites, other molecules will be forced to collide and travel through directly zeolites.

What you need to consider for a moment is the fact that zeolites and many other solids have large surface areas. Gases can bind to the surface of a zeolite, commonly the Langmuir isotherm is used to explain or consider this binding. The amount of gas on a solid (moles of gas per gram of solid) can be expressed using the following equation.

Where $q$ is the moles of gas per gram of solid, $k$ is a constant and $P$ is the pressure of the gas.

This equation relates to a model which has three assumptions.

If the values of k and k' are different then it is possible to use a bed of the solid to make a separation of the two gases. The plant you show uses a cyclic process in which one gas is absorbed onto a column and occasionally desorbed from the column. There are other applications of similar ideas in chemistry.

If we consider for a moment the classic Tc cow, this is Mo-99 which is adsorbed onto alumina. The binding of $\ce{Mo}$ as molybdate onto alumina is much stronger than that of pertectinate. I am sure that if one was to do experiments with very small amounts of Mo or Tc as the anions then it would be possible to measure the values of K for these anionic metal complexes onto alumina. Then we could use the same Langmuir equation to model and understand a Tc cow (Tc-99m generator).

Another use of the same maths is in soil chemistry, for the adsorption of a small amount of a metal onto the surface of soil minerals it is common to use Kd values to predict what happens. Consider for a moment a soil which contains a very small trace of uranium or zinc.

The way to get this is to write

In a zeolite we can at high coverage of gas we can get adsorption of gas molecules onto other gas molecules (see the BET isotherm for more detail) we can also get other effects such as liquid gases condensing into pores of silicas and zeolites.

I think that to understand the zeolite system then you would need to make a lot of measurements of isotherms for the adsorption of both nitrogen and oxygen onto the zeolite. Doing this at different temperatures would also help you understand the system better as well.

Another thing you need to consider is how quickly does diffusion in and out of a zeolite particle occur, this will make the system more complex. If you want to understand this kinetics issue then I suggest that you read about the maths of GC columns. The resolution of a GC column goes down both at low and high flow rates. A good mathematical model exists for HPLC and GC columns, I recall it was published years ago by a Dutch chemist.

I will warn you that many systems do deviate from the Langmuir isotherm model.

Not the answer you're looking for? Browse other questions tagged separation-techniques or ask your own question.