Dentists use a light activator: (image from Wikipedia). 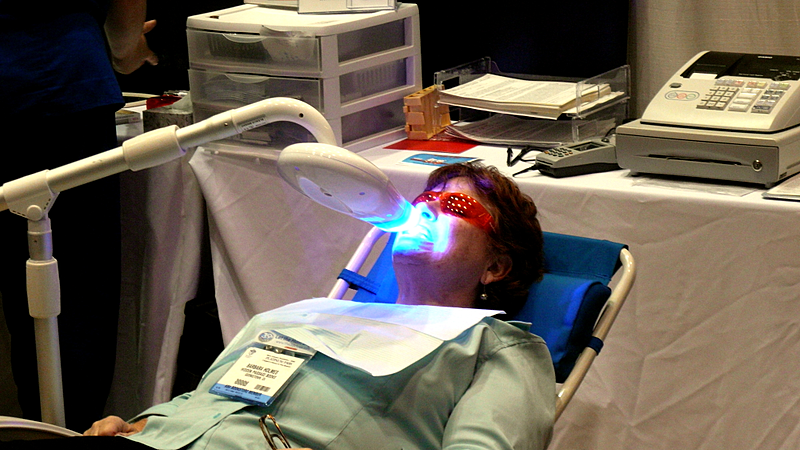 Consumer kits typically include 35% carbamide peroxide gel. Some of them use an LED light too, while others don't.

Wikipedia seems to be in two minds about it, stating

Recent research has shown that the use of a light activator does not improve bleaching, has no measurable effect and most likely to increase the temperature of the associated tissues, resulting in damage

while also talking about which light is "best":

Is a light source relevant here, or is it merely a marketing gimmick?

I hate to answer my own question, but after some digging, I believe that the use of a light source is in fact a gimmick, at any concentration of the reagent, contradicting the only other answer so far (But I'm happy to be corrected, if I'm wrong)

This meta-study https://www.ncbi.nlm.nih.gov/pubmed/22525016 concluded that at high concentrations of the reagent (typical of in-office use), the light is useless; and there was insufficient or no data for lower concentrations (as of 2012):

Light increases the risk of tooth sensitivity during in-office bleaching, and light may not improve the bleaching effect when high concentrations of HP (25-35%) are employed. Therefore, dentists should use the light-activated system with great caution or avoid its use altogether. Further rigorous studies are, however, needed to explore the advantages of this light-activated system when lower concentrations of HP (15-20%) are used.

The in-office bleaching treatment of vital teeth did not show improvement with the use of light activator sources for the purpose of accelerating the process of the bleaching gel and achieving better results.

I'm inclined to think that if light were useful at all, they'd see this at higher concentrations of HP too, but I haven't seen any recent studies that address the lower concentrations specifically.

Before answering your question, we must review the mechanism of bleaching action. Hydrogen peroxide ($\ce{H2O2}$) is replacing other beaching agents as the preferred beaching agent in many applications. Although it was accepted that $\ce{H2O2}$ acts by destructively oxidizing colored organic molecules involved, its bleaching mechanism by such oxidation is still not well understood. However, recent works on the bleaching of textile by $\ce{H2O2}$ have identified that the hydroxyl radical ($\ce{HO^.}$) and perhydroxyl radical ($\ce{HO2^.}$) are the active oxygen species mostly responsible for such action [1]. The facts found by a separate study on the effects of the $\ce{HO^.}$ radical and $\ce{H2O2}$ on tooth bleaching suggest that $\ce{HO^.}$ has the main role in tooth bleaching with $\ce{H2O2}$ [2]

Now, we look at bleaching process in Dentists' office: Stable hydrogen peroxide-urea solid is commonly used in these situations to avoid unstable aqueous $30\%~\ce{H2O2}$. It is described in Wikipedia article on hydrogen peroxide - urea as follows:

In the Wikipedia article on tooth whitening mentioned in your question states that:

At a dentist's office, they may use the light source to accelerate (and light-influenced catalytic radical cleavage) above spontaneous reactions to generate $\ce{HO^.}$ and ($\ce{HO2^.}$)Radicals. To support my argument, I'd like to point out the following statement from the same source you noted above in the Wikipedia article on tooth whitening:

Use of light during bleaching increases the risk of tooth sensitivity and may not be any more effective than bleaching without light when high concentrations of hydrogen peroxide are used.

Thus, use of light source is not a gimmick. It is a necessity.

Not the answer you're looking for? Browse other questions tagged inorganic-chemistry everyday-chemistry temperature photochemistry or ask your own question.

8
Does borax do anything more for “boosting” detergent than adding active oxygen would?
8
Does hydrogen peroxide exhibit intramolecular hydrogen bonding interactions?
19
What exactly happened when I added KOH to hydrogen peroxide?
2
What is formed when hydrogen peroxide reacts with titanium?
2
Using Hydrogen Peroxide to clean toilet
0
Why Li can't make it's Peroxide when heated with more O2?
0
Why hydrogen peroxide sizzles in the bathroom sink?
4
Full equation when using vinegar, hydrogen peroxide, and salt to etch copper