Reaction of anisole and succinic anhydride in presence of aluminium chloride

Predict the structures of the intermediates/products in the following reaction sequence: 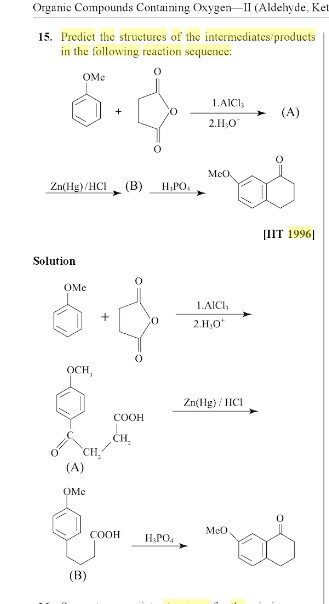 In the first step, I know that aluminium chloride is playing some role, as otherwise hydronium ion would have reacted with succinic anhydride to give succinic acid.

I thought of the following two possibilities:

So, what is the reaction mechanism for the formation of (A)?

Aluminium chloride ($\ce{AlCl_3}$) is mainly used for this Friedel-Crafts alkylation or acylation, where this compound acts as catalyst, and also controls the production of the desired compound.

For this, we need the state of the reactants in a proper way. We have to make sure that, the oxygen of $\ce{OMe}$ does not attack prior to the phenyl ring, and also, the electrophilicity of the carbonyl carbon needs to be increased to much extent, which is generally not so much due to present resonance in the compound.

$\ce{AlCl_3}$ plays a special role over controlling these two phenomena. Being a Lewis acid, it forms a Lewis acid-base interaction with the oxygen of $\ce{OMe}$ and also with the oxygen atom of $\ce{C=O}$ group in succinic anyhdride. Due to this interaction, a δ+ charge is introduced on both oxygen atoms described before. This increased formal charge helps to increase the electrophilicity of the carbon due to increased -I effect of the attached oxygen and also reduces the chances of attacking by $\ce{OMe}$ group. This catalyses to form our desired product with the proper reaction between the reactants.

Not the answer you're looking for? Browse other questions tagged organic-chemistry reaction-mechanism carbonyl-complexes or ask your own question.