With which group does the middle oxygen atom of an anhydride remain, on hydrolysis? 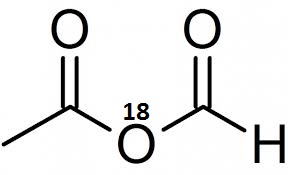 On acid catalysed hydrolysis with normal water, is this isotope found in formic acid, or acetic acid, or in both (i.e., hydrolysis is random and hence the product contains both the acids with both types of oxygen atoms)?

organic-chemistry carbonyl-compounds hydrolysis
Share
Improve this question
edited May 6 '18 at 14:43

For the reaction the mechanism is usually tetrahedral. Only under acid catalysis does the SN1 mechanism occur and seldom even then.

Of the eight mechanisms given by Ingold for ester hydrolysis, seven have actually been observed in hydrolysis of carboxylic esters. The one that has not been observed is the BAC1 mechanism. The most common mechanisms are the BAC2 for basic catalysis and the AAC2 for acid catalysis, that is, the two tetrahedral mechanisms. Both involve acyl-oxygen cleavage.

So considering the mechanisms for ester hydrolysis and anhydride hydrolysis to be similar, it can be proved that the extent of δ+ charge on the carbon being attacked does play a major role in deciding the rate of reaction.

For instance, the rate of hydrolysis for the following esters is in the order shown:

So I think this should be enough to prove what I stated in the very beginning of my answer.

The mixed anhydride, acetic formic anhydride (AFA), was first prepared by Béhal in 1899 who formed it by dissolving formic acid in acetic anhydride (AFM) in 1:1 mole ratio (Béhal, Compt. rend., 1899, 128, 1460)[1]. It was described as a liquid with an odor similar to that of acetic anhydride, boiling at about $\pu{29 ^\circ C}$ at a pressure of $\pu{18 torr}$. Similar to formic anhydride, which decomposes to formic acid and carbon monoxide ($\ce{CO}$) at room temperature within hours, AFA also decomposes slowly to acetic acid and $\ce{CO}$ by long standing at room temperature. For example, $\pu{50 mL}$ of AFM in a 100 mL volumetric flask with a rubber stopper had suddenly exploded after standing undisturbed for about 2 weeks [2]. Only $\ce{CO}$ (by flame test) and acetic acid in the flask were detected. The reaction was described as: $\ce{HC(=O)OC(=O)CH3 -> CO + CH3COOH}$.

The decomposition of AFA is accelerated by increasing temperature and types of catalyst used, and also depends upon the solvent used[1]: for instance, it is very fast in aprotic solvents such as toluene, carbon tetrachloride, and nitrobenzene, but slow in protic solvents such as ethanol, I-pentanol, and 2-methylpropanol (note that AFA undergoes formylation reaction of alcohols, instead of decomposition to $\ce{CO}$ and acetic acid; [3]). The catalyst for the decomposition could be either an acid (e.g., $\ce{H2SO4}$, $\ce{HNO3}$, $\ce{HF}$, $\ce{HCl}$, etc.) or tertiary amine bases (e.g., N,N-dimethylbenzeneamine, brucine, strychnine, nicotine, etc.), either of which produces $\ce{CO}$ and acetic acid. Note also that, a mixture of anhydrous $\ce{HF}$ and AFA at $\pu{0 ^\circ C}$ and atmospheric pressure produced formyl fluoride ($61\%$) with small amount of acetyl fluoride [4]. It’s noteworthy to mention that formyl fluoride is the only known stable halide of formic acid. The above reaction, however, depends on even relatively minor variations of conditions. For example, the reaction performed at room temperature instead of $\pu{0 ^\circ C}$ has yielded almost equimolar amounts of the formyl and acetyl fluorides [4]. Based on all of these evidences, it is safe to suggest that the most susceptible carbon center of AFA to a nucleophilic attack is the carbonyl carbon of its formyl group, but very sensitive to the reaction conditions.

Olah and others have done excellent work on AFA protonation [5]. According to $\ce{^1H}$ NMR evidence, they suggested rapid proton exchange between carbonyl oxygen atoms (observable at $\pu{-85 ^\circ C}$) of AFA and its eventual decomposition by excess super acids to protonated acetic and formic acids, acetyl cation, and formyl cation intermediate, which is not detected even at $\pu{-130 ^\circ C}$, but rapidly decomposed to $\ce{CO}$. Suggested mechanism and $\ce{^1H}$ NMR evidence are as follows: 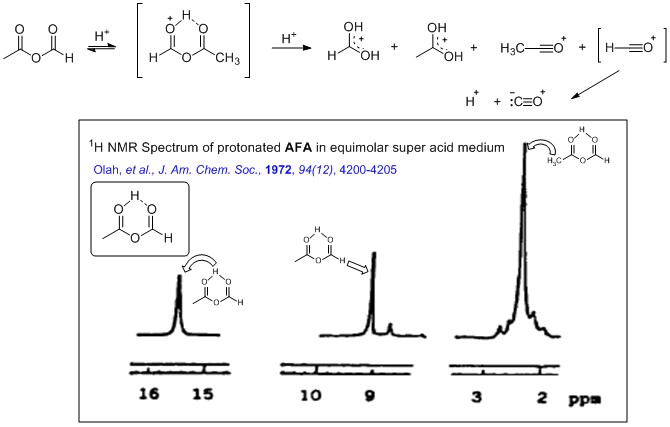 Since, AFA gives formylated alcohols under similar condition in alcohols, the following mechanism can be suggested:

Yet, the major and minor product ratio is extremely depends on reaction conditions due to high sensitivity of AFA to its atmosphere.

Following example shows it can be used to selectively acylate (formylate) vide variety of heteroatoms if conditions are used accordingly [6]. 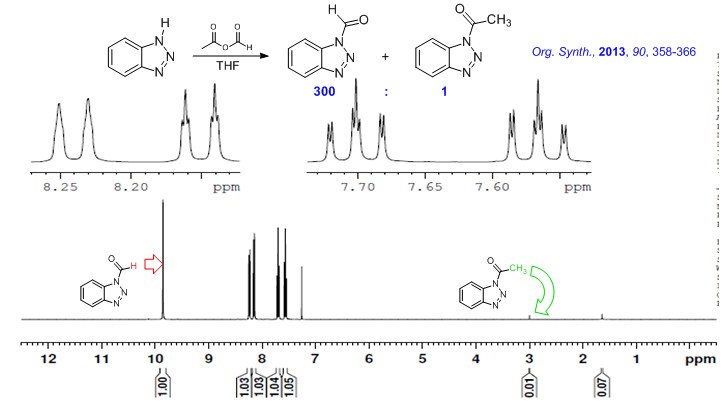 The oxygen would remain more often with the aceto group, but I'm sure you would get a mixture of products. The aldehyde moiety is more electronegative than the ketone moiety of the anhydride so would be preferentially attacked by the water molecule during hydrolysis. Also, the aldehyde portion would be more sterically accessible to the attack.

Not the answer you're looking for? Browse other questions tagged organic-chemistry carbonyl-compounds hydrolysis or ask your own question.

13
Why can't alcohols form hydrogen-bonded dimers like carboxylic acids?
7
Relative rate of hydrolysis of the carbon chlorine bond in thioethers and ethers
7
Evaluation of a synthesis from aspirin to paracetamol from this Nile Red video
5
Is there a systematic naming system to name carbonyl derivatives?
2
Why is the hydrolysis of the conjugate base of a weak acid neglected in buffer solutions?
3
Comparison of acidities