Is there a simple way to predict the molecular pi orbitals in conjugated pi systems?

Particularly for longer alkyl chains. Or is predicting these molecular orbitals from quantum mechanics too complex to be able to be translated easily as a geometric pattern? If Frost Circles exist, I just figured something could for this as well. The only pattern I've been able to identify is that each molecular orbital is symmetrical, starts with no nodes and goes up by one with each higher energy orbital but for systems with many carbon atoms, this isn't a specific enough set of rules. 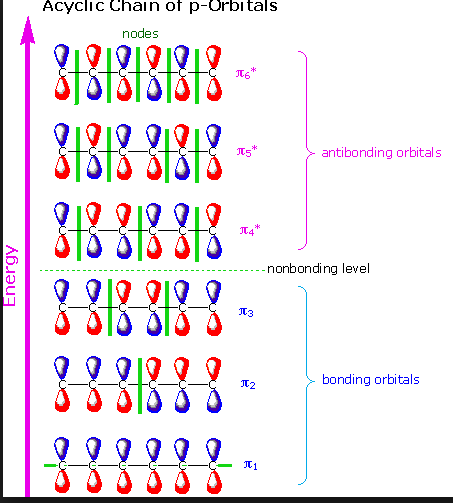 This should work for any even number of conjugated carbons (and with slight modification, for cations/radicals/anions of uneven numbers of carbons). You can follow a simple procedure to generate all the $\pi$ orbitals.

The Huckel method mentioned in the comments is a more formal way of obtaining the orbitals by solving for the eigenvalues and eigenvectors of an adjacency matrix. The adjacency matrix is formed by numbering the carbon chain and forming an NxN matrix with the rows and columns numbered like the carbons. In each row, put a 1 if the carbon of the row and column are adjacent and put an x if they are the same. A simple online calculator with a few examples and instructions for this can found here (this only gives the eigenvalues, you would probably have to download or code your own version to give the eigenvectors). You only really need these eigenvectors to get an equation for the orbitals, but for your case you can do that just as well with the simple procedure by simply writing the MOs as linear combinations of the AOs.

Not the answer you're looking for? Browse other questions tagged organic-chemistry quantum-chemistry molecular-orbital-theory hyperconjugation or ask your own question.

16
Classifying some molecular orbitals after Hartree-Fock calculation
4
Hybridisation and the Schrödinger equation
10
Is there a physical explanation why benzene's pi molecular orbitals in a Frost circle are degenerate but pyridine's are not?
6
Why do solutions of electron in a box (and in a ring) predict coefficients for LCAO (linear combination of atomic orbitals) in 1D systems?
4
How do we obtain the π molecular orbitals for allene via Hückel theory?