I prepared some sodium aluminate by reacting a strong $NaOH$ solution with aluminium foil and filtering the result. I now have a clear solution and I'm not sure what it is. I stopped adding aluminium when the reaction rate showed down dramatically in a hot water bath. Basically what I'm asking is what are the properties of sodium aluminate since Wikipedia is severely lacking in information on sodium aluminate

There are multiple reactions going on simultaneously. Aluminum metal reacts with the oxygen in surrounding air in order to create a plating of aluminum (III) oxide.

Upon addition of sodium hydroxide, the oxide layer reacts with the base, leaving the aluminum free to attack by water for instance.

In summary, we can write the sum of the reactions as:

The reason why the reaction proceeded slowly at first was due to the aluminum (III) oxide layer covering the aluminum metal.

This reaction is used in drain cleaners. They are mostly made out of strong alkalis, to which alumunim or zinc has been added. The alkalis break down organic residues chemically. In addition, the formation of hydrogen leads to a bubbling effect which adds an additional mechanical cleaning mechanism.

Considering the properties of aluminates, one can go to PubChem hosted by the NIH which has a lot of information for almost every single compound necessary as well as literature linked to the specific compound in question: 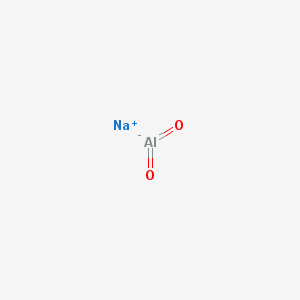 Not the answer you're looking for? Browse other questions tagged physical-chemistry inorganic-chemistry or ask your own question.

4
pH of sodium metasilicate anhydrous vs pentahydrate when dissolved in water
1
How to calculate the pH of a sodium bicarbonate-sodium hydroxide buffer solution?
9
Testing thermite for chemical properties
1
Separating sodium sulfate from chromium trioxide solution