Today, in my organic chemistry class, I learnt about the nucleophilic substitution reaction. The notes have stated that:

An example was then given of a bromide leaving from a bromoether to give a resonance-stabilised carbocation. 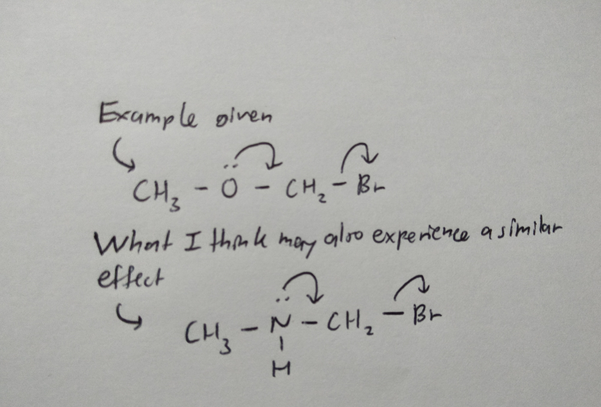 The reactivity of haloalkyl ethers are well documented (e.g., they were originally used to protect $\ce{-OH}$ groups during total syntheses). For instance, chloromethyl methyl ether had been used to protect alcohol and phenol $\ce{-OH}$s as $\ce{-OCH2OCH3}$ or commonly known as $\ce{-OMOM}$. They should be sealed and stored in freezer to protect from moisture because they are susceptible to decompose by reacting with water, showing their reactivity. They are also well known carcinogens. An early review on $\alpha$-haloalkyl ethers can be found in Chemical Reviews (1955)([Ref. 1]).

For example for carcinogenic activity of a $\alpha$-halo ether: Human health assessment information on bis(chloromethyl)ether can be found on the IRIS website (https://www.epa.gov/iris). IRIS stands for Integrated Risk Information System, a part of EPA’s mission to protect human health and the environment.

Recently, I have found some literature which does help to answer my question.

On p. 339, Clayden, Greeves, & Warren (2012) did mention that in general, $\alpha$- nitrogen, as well as sulfur, substituents can effectively provide resonance stabilisation to the carbocation, facilitating the $\ce {S_N1}$ process.

Adjacent atoms with one or more unshared pairs of electrons strongly stabilize a carbocation. Table 3.11 (p. 304) indicates the stabilization of the methyl cation by such substituents. Alkoxy and dialkylamino groups are important examples of this effect.

When we see such circumstances of resonance stabilisation, I believe many of us may question to what extent is this effect at play because this seemingly goes against conventional understanding as more electronegative atoms are bearing the positive charge. To this, Carey & Sundberg (2007) went on to say:

Although these structures have a positive charge on a more electronegative atom, they benefit from an additional bond that satisfies the octet requirement of the tricoordinate carbon. These “carbocations” are best represented by the doubly bonded resonance structures. One indication of the strong participation of adjacent oxygen substituents is the existence of a barrier to rotation about the C−O bonds in this type of carbocation.

If you think about it, it does make perfect sense since you are making an extra bond through this resonance effect. The exothermicity of bond formation more than compensates for the placement of the positive charge on the electronegative atom.

Not the answer you're looking for? Browse other questions tagged organic-chemistry halides amines nucleophilic-substitution or ask your own question.

3
How would substitution reaction results differ between reacting halides with a tertiary bromoalkane vs reacting it with a primary bromoalkane?
12
Will this beta-branched secondary alkyl halide undergo SN1 or SN2?
3
Determining the mechanism followed when alcohols undergo a reaction with sodium bromide and sulphuric acid
1
SN1 reaction of alkyl halides