How does the Wurtz reaction produce alkynes?

@tox123: You have generated two radicals on the same carbon by a two-electron reductive α-elimination (1 --> 2). So far, so good. In other words, you have created a carbene (2). Carbenes can rearrange to alkenes, NOT alkynes. Think of the two orbitals on the carbenoid carbon as one bearing two-electrons (negative) and the other one vacant (positive) (3). When a vicinal hydride migrates to the vacant orbital, one has a negative charge on one carbon and a positive charge on the vicinal carbon (4). Structures 4 and 5 are identical. If dichloride 1 is treated with base, one gets a double elimination to an alkyne. There is no change in oxidation state. Therefore, dichloride 1 cannot give an alkyne via a 2-electron reduction.

So, as wikipedia says:

The Wurtz reaction occurs through a free radical mechanism.

So starting off with a geminal dihalide as in the picture below, and then adding sodium metal you get two unpaired electrons on a single carbon. 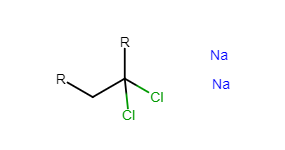 One of these electrons binds with an already paired electron on the other carbon forming an alkene with free electrons on both sides of the double bond (this should also form a free hydrogen atom, which is not pictured below): 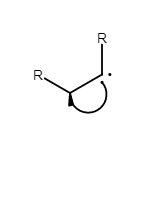 These electrons then pair with one another to form an alkyne (freeing another hydrogen atom, which will react with the first to form hydrogen gas):

As a disclaimer, I don't know if this is the exact mechanism this is just an educated guess on my part, but because the Wurtz reaction has a free radical mechanism, this seems the most obvious way of this occurring.

Not the answer you're looking for? Browse other questions tagged organic-chemistry organometallic-compounds or ask your own question.

1
Why does dimethyl dichlorosilane undergo hydrolysis to form siloxane polymers, but its carbon analog does not?
5
Does the Dieckmann Reaction proceed via the conjugated enolate of the product?
3
Does Wurtz-Fittig-reaction involves Sn1 or Sn2?
9
Mechanism for conversion of ketone to dichloride with phosphorus pentachloride
4
Why does d/l-2,3-dibromobutane on reaction with NaI/acetone give cis-2-butene?
6
Order of reactivity of substrates towards Wurtz reaction