Does anyone do mass spectrometry with a magnetic sector to separate ions by mass and an array of detectors in a line to measure the ions? If not, why don't they?

Something like this this setup for measuring the spectrum of light? 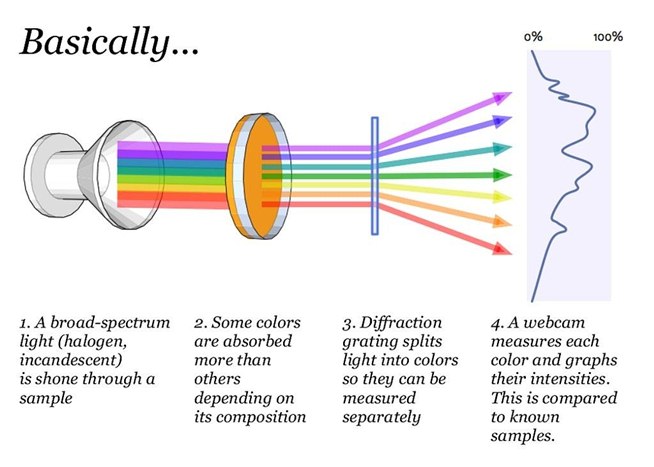 Yes, this is called distance-of-flight mass spectrometry. It offers some advantages for large (e.g. biological) molecules and because of its high speed for identifying multiple targets, in chemical and biological warfare.

Indeed mass spectrometers that disperse the ions in space according to there m/z do exist. The main question is how the detection is done: the detector needs to have a rather large surface compared to the detector in a standard mass spectrometer. In the early times of mass spectrometry, these were called "mass spectrographs", using a photographic plate as the detector. Standard detectors (multi-channel plates, conversion dynodes, electron multipliers) either are not well adapted to a large surface collection or are expensive to produce with large surfaces. Thus currently, only some specific instruments such as isotope ration mass spectrometers still rely on using several collectors and a magnetic sector, placed at an adequate position to measure simultaneously the various isotopes of a given element. This brings much better accuracies on the abundances.

Dispersion is space is not the only way to achieve simultaneous detection of several m/z values (thus achieving a non scanning mass spectrometer): dispersion in time or in frequency can also be a method to measure simultaneously the m/z of ions without scanning the m/z range. Time of flight mass spectrometers disperse the ions in time (the smallest m/z arriving before larger ones) and FT-MS instruments (Orbitrap or FT-ICR, when using, respectively, an electrostatic field or a magnetic field) use the dispersion in frequencies to separate ions and measure simultaneously the frequencies of the ions present through their image current. The limitation of these mass analysers is that although they do not technically scan the entire mass range (all m/z that are present are detected), they do work in a sequential manner: ions are only admitted in the dispersion region at precise times. If an ion storage region is added ahead of the mass analyser, even with a continuous ion source it is possible to store the ions until the next analysis event and lose very little ions.

Thus as other methods do exist which paralellize ion detection over the full m/z range, the mass spectrographs have mostly gone out of the market.