Can gas be made to block radiation better?

Can any gas block radiation? I ask this because I would like to know if the properties of any gas element would chemically react differently with radiation from adding an electrical current. 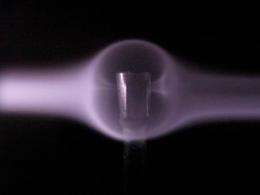 This picture shows an Earth magnet's field deflecting plasma naturally in a vacuum.

Does any gas extend the electromagnetic shielding properties of a magnetic field?

I am interested if the lack or composition of an atmosphere's chemical properties would inhibit or complement the deflection and absorbing of cosmic radiation when coupled with a magnetic field.

Can contained pure $\ce{O2 O1 O3}$ be cycled back with electricity to replenish $\ce{O3}$ broken down by radiation while giving the gas an electromagnetic field?

Your question seems to be about the ozone layer, but shows some misunderstanding.

First, ozone, $\ce{O3}$, absorbs some "radiation", specifically electromagnetic radiation, e.g. visible light or ultraviolet light (UV), as do many other gases. This absorption is not the same for all wavelength ("colors"), but in the UV region peaks about 250 nm, which is a good thing for us, because plants and animals have not evolved good protection from that light, and the small amount of $\ce{O3}$ in the upper atmosphere is enough to block most of that UV. Sulfur dioxide, $\ce{SO2}$, released in volcanic eruptions, is also able to absorb 250 nm UV. Molecular oxygen, $\ce{O2}$, absorbs "vacuum UV", 10-100 nm, which otherwise would be a problem.

Second, Earth is continually bombarded by another type of "radiation", particles such as cosmic rays and solar energetic particles. Rather than electromagnetic energy, these are made of particulate matter such as protons or nitrogen nuclei. All gases, in fact all matter, help block these particles. Magnetic fields such as that of the Earth help divert them around the planet, too, but there is some question whether a magnetic field is essential to blocking particulate radiation. Here at the bottom of the atmosphere there is a column of air weighing about a kilogram over each square centimeter, which is sufficient to block primary cosmic rays, though a showers of weaker secondary particles do reach the surface. There is no advantage to a conductive Faraday cage to protect the Earth.

Third, all gases conduct electricity when ionized. The majority of air is nitrogen, oxygen and argon, which produce various colors in an aurora. Though magnificent to watch, aurorae are simply evidence of energetic particles trapped in a magnetic field, ionizing the upper atmosphere. This layer of the atmosphere is called the ionosphere, and is responsible for long-distance radio communication. It's height varies from day to night and with solar storms.

3
Why use a heating block?
0
Frequency, the only real characteristics of electromagnetic radiation ??
13
Radiation in space and its effects on chemical reactions?
0
Is Neutron radiation considered electromagnetic wave?
7
Can gamma radiation cause transmutation?
1
Burning Of Coal and Black Body Radiation
0
How much ionising radiation is released during an atomic blast?
2
Can visible light or infrared radiation excite electrons?
1
What emits the least radiation when hot?
13
Can reactions produce microwave or radio wave radiation?