Maximum (Z) to (E) ratio in the photoisomerization of azobenzene?

Considering the photoswitching of azobenzene, I was told the following argument: Considering that the photoexcited state of azobenzene has a about 50% to 50% chance of yielding either the (E)- or (Z)-isomer, the maximum (Z)/(E) ratio achievable should be 1:1.

However, I have seen UV-VIS spectra where the (Z)-isomer seems to be in excess. So I figured that the above argument must be wrong. I would analyze the situation in the following way: 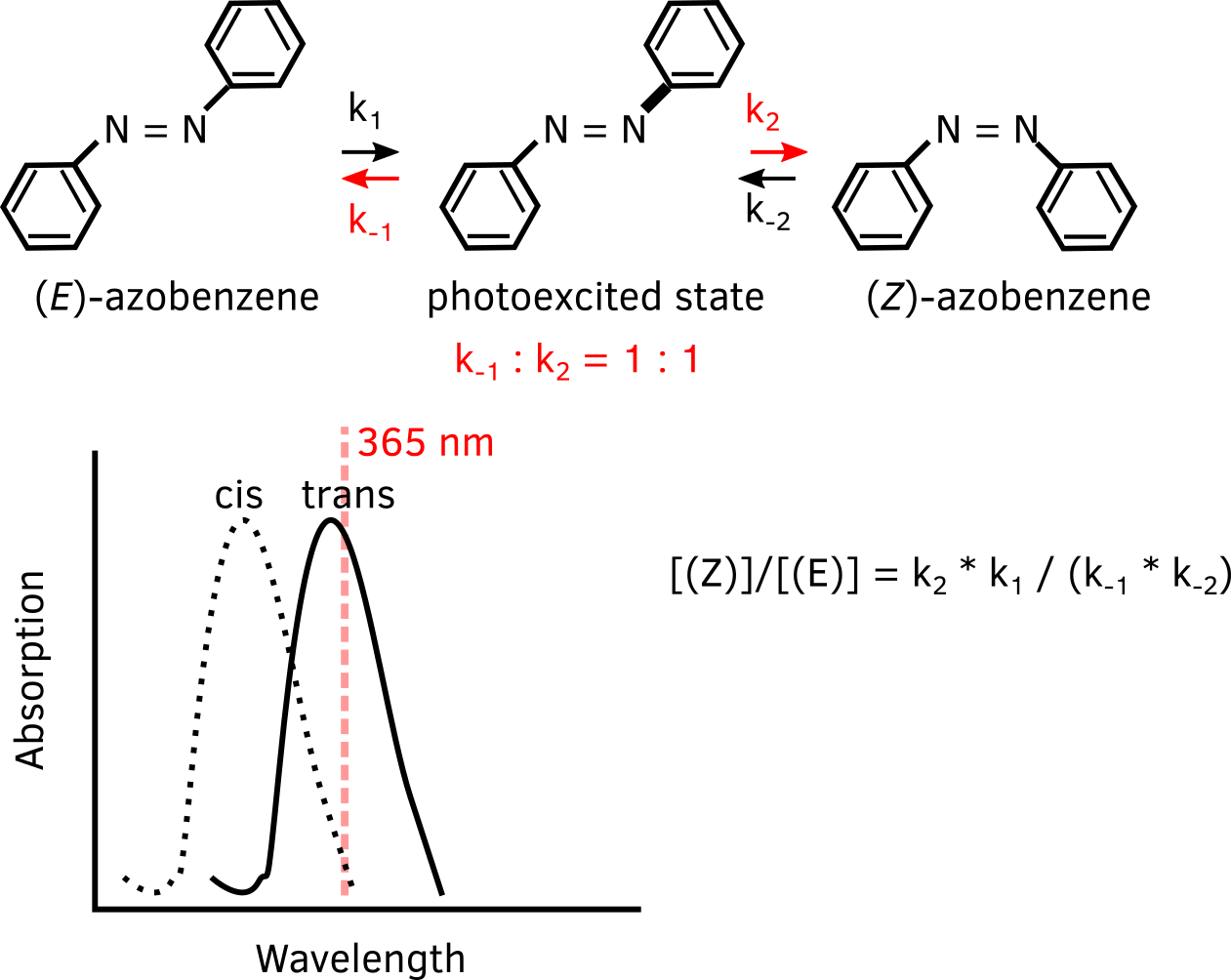 Is this analysis correct or am I overlooking something?

Your question is not completely clear to me, so I am answering based on thinking that you are asking about why, after photoisomerization, the system can relax with roughly equal probability to either the E or Z minimum.

Strangely I know something about the photochemistry of azobenzene. One overarching theme is that azobenzene molecules undergo very complicated isomerization processes which are sensitive both to how you substitute them and to the solvent in which the experiment is done. Additionally, the photoisomerization and thermal isomerization processes don't necessarily share anything in common. There is a pretty in-depth interesting literature on different types of azobenzene molecules discussing the relative roles of inversion and rotation relaxation pathways, solvent effects, and so on... I just bring this up in case you are interested to read more.

The case you describe, I think has a relatively straightforward explanation actually. In ref. [1], a computational study is done on azobenzene to find which pathway, rotation or inversion, is dominanant upon photoisomerization of azobenzene. To clarify, rotation means rotation about the CNNC dihedral, and inversion means moving one of the rings along the CNC angle.

Not the answer you're looking for? Browse other questions tagged organic-chemistry spectroscopy photochemistry or ask your own question.

13
Photoisomerization of Azobenzene
26
Are the bonding orbitals in methane equivalent - photoelectron spectrum
3
How to choose a UV lamp for photoisomerization of 4,4'-azobenzene dicarboxylic acid?
1
Percentage of trans-stilbene traces in cis-stilbene H NMR
3
Is there a known relation between the diffusion of a molecule and the diffusion of the reactants?
9
Hybrid orbitals, photoionization and time dependence
14
Is light a reactant in photochemical reactions?