How to crystallize a solution of N,N-dimethylphenylalaninemethylesterhydrochloride without heating it?

I have an aqueous solution of N,N-dimethylphenylalaninemethylesterhydrochloride and I need to crystallise it as a salt. I'm afraid of increasing the temperature or the concentration of acid due to the possibility of ester hydrolysis.

What crystallisation method would be the most efficient in this situation?

This molecule is an ammonium anion with an ester side chain as a chloride salt.

The first option you have is to undertake the vacuum evaporation of the solvent at room temperature. This would should prevent any heat degradation. I do understand your point about increasing the acid because in effect you have a buffer solution.

Your second alternative is to partition into a warm amine-ophilic non-aqueous/organic layer and crystallize from there. The method is briefly described in Phase-Transfer Catalysis - Fundamentals, Applications, and Industrial Perspectives[1].

An excerpt from the book:

b. Simple Transfer Across the Interface A second mechanism for anion transfer is simple anion interchange across the interface, as represented in the following diagram: 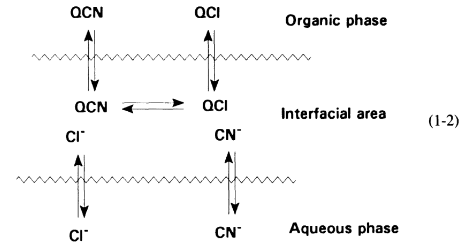 This research paper[2] goes into further details about the process.

If you have no solid to test solubility, my first attempt would be to use an anti-solvent (which you'll need to determine empirically). The anti-solvent for your hydrochloride salt should be miscible with water, so for ease, I would suggest starting with simple alcohols; methanol, ethanol, 2-propanol. See which gives you some solid precipitating out of solution, check purity and then work from there on concentrations or temperature if required.

Not the answer you're looking for? Browse other questions tagged organic-chemistry aqueous-solution solubility solutions or ask your own question.

1
Extract acid from a solution
1
Making a solution with two solutes
1
How can I make a fairly saturated copper (II) sulfate solution by heating?
0
Gelatination of solution in saponification
2
How to take a sample of a hot salt solution without it precipitating in the cooler glassware due to the difference in solubilities at different temps?
0
Is an aqueous solution of potassium bicarbonate acidic or basic in nature?
0
Effect of mixing acids on solubility