What are the crystals that have formed around the top of a conc. nitric acid bottle? 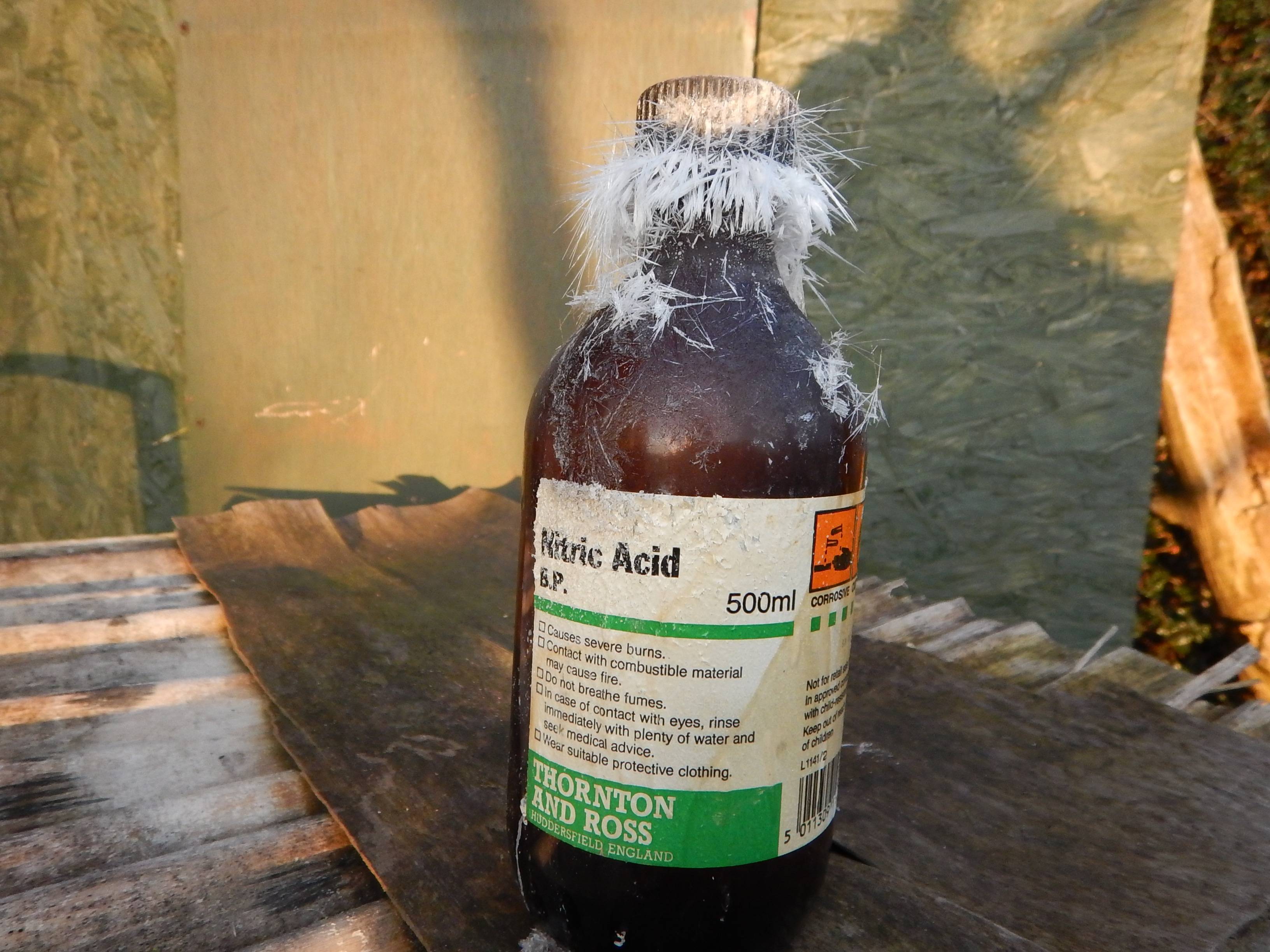 I was looking through my chemicals cupboard and found that this decades-old bottle of conc nitric acid had grown a beard. I can't think of any reaction between (presumably) $\ce{NO2}$ and any airborne substance that could produce this. Any ideas?

Chemicals cupboard often produce quite extraordinary reactions, much like hospitals are home to some unusual and severe infections.

Nitric acid does not normally exhibit such a bizarre behavior. Yet in your case it did. How so? My bet is on some unknown additional component which came from the same cupboard, but from a different bottle. For instance, it could be some lower aliphatic amine (Upd. or simply ammonia, as was brought to my attention by other answers). They are volatile, and they produce crystalline salts when they meet with strong acids.

A similar thing is known to happen with $\ce{NH3}$ and $\ce{HCl}$: if they are stored nearby, especially in poorly corked bottles, they both (as well as everything around) get covered in a white residue of $\ce{NH4Cl}$. It doesn't form nice crystals, though; it looks more like a layer of hoarfrost. But that doesn't mean much. Related compounds do not necessarily have related crystal structures, let alone related crystal shapes, so it looks perfectly plausible to me that (substituted or not) ammonia nitrate would grow into fine needles.

The prevalence of amine/ammonia in the air within the cupboard (which could happen if the other bottle was corked worse than this one) would naturally lead to $\ce{HNO3}$ molecules fighting this battle at their own doorstep, that is, at the very bottleneck of this bottle and nowhere else. This would explain the accumulation of residue at one spot.

There are several mentions of this on the interwebs, including this one on a science forum.

The consensus is ammonium nitrate. From working with the stuff and inheriting old bottle in schools, I have seen this a number of times. The fine crystal certainly looks like slow growth from airborne NH3 or amines as the other post said, but NH3 is far more common, depending on which chemicals are stored where in the lab.

Yes, ammonium nitrate is an explosive, but needs a pretty solid activation energy, so you can just slowly carefully rinse this away with lots of water.

You can certainly remove a small amount and test in a beaker with a few drops of water just to be sure.

Not the answer you're looking for? Browse other questions tagged acid-base decomposition or ask your own question.

1
What are the factors that affect the corrosiveness of an acid?
2
Why doesn't nitric acid have a positive charge?
16
Why would 1kW power supplies fail around Nitric acid (HNO3) gas?
5
Sulfuric acid fumes from cleaning shower drain
4
Why are silver halides insoluble in nitric acid
0
Painting corroded 9V battery contacts with vinegar
1
Why can Neutral Red (indicator) not test values below its pKa?
3
Alkoxide metathesis