Why does the distance between molecules increase when the temperature is raised?

I have learnt that when we heat ice-like substances it changes to water and when I asked my teacher she said that the distance between molecules increases.

When I thought about it a bit more a question arose: Why does the distance between the molecule increase as we raise the temperature?

The answer "the distance between molecules increase" is incomplete if not plain wrong.

Temperature is an effect of energy present. Basically, it's an effect of little movements and vibrations of molecules and atoms due to their energy.

In an crystal, the energy of the molecules is so low, that they don't vibrate and move enough to break the structure. The more energy you put into the system, the more the molecules move. At one point, the movement is too much to keep the molecules in place, the crystal structure breaks apart, the ice melts.

A liquid (NOT WATER, IT IS A SPECIAL CASE) has lower density than the crystal because the molecules are moving around a lot and "need more space".

In general, for any substance, molecules in the liquid state are far more free to move as the intermolecular forces of attraction are lesser here (Less-densely packed). But considering water(as pointed out by Ivan), it actually shows the reverse trend ie., density of ice < denisty of water. For more details on this, refer Physics.SE and/or Quora.

Also in general, for any substance, when temperature increases, the total energy (includes kinetic and vibrational) increases, as temperature is a measure of energy of a system. When considering the solid state, since they are tightly packed, the particles can only vibrate about their mean positions and when the vibrations becomes more, it is tougher for the system to hold onto, and hence the phase change occurs. (From solid to liquid state). But you’ve also got to note that some substances don’t exist in liquid state at a particular pressure.

To followup on other answers, there is no guarantee that particle (molecule or atom) spacing will increase. If you maintain sufficient pressure you can heat things well above their normal phase transition temperatures.

It is true that, in the absence of external pressure, liquids tend to have lower densities than their corresponding solids. The particles no longer have shared orbital bonds as they do in a solid structure, and thus are held together via weaker forces such as ionic. When they are heated to gas-phase temperature, even these forces are overcome and the particles move as far apart as possible -- the iconic "fill the container" behavior of a gas. Due to statistical behavior, the density of the gas tends very quickly to be isotropic within that container. 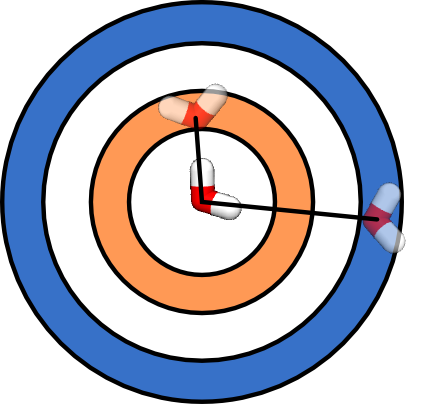 Adding distance between molecules is not the only way to increase entropy, which accounts for the exception of melting ice. Entropy can also increase by making the arrangement of molecules and their orientations more disordered. Liquid water has more entropy than ice not because the molecules are farther apart, but because they arranged and oriented more haphazardly.

First you have to understand that molecules are randomly moving in matter.When you heat them,you essentially give them kinetic energy which increases their speed and hence the distance between molecules increases implying that interatomic forces decreases,leading to change in state from solid to liquid.The basic difference between solid,low,and gases are that molecules in gases have more kinetic energy than liquid which have more than solid.

8
Is there any scenario in which the size of a molecule increases due to an increase in temperature?
5
What is the term for the amount of volume change at a phase boundary?
1
Finding the equilibrium temperature between two substances in a constant pressure calorimeter
7
How does iceskating work?
0
The temperature rise after neutralisation
2
Hydrogen Bonding in Water Phase Changes
5
Why Does Activation Energy not change with Temperature change