Effect of stereoisomerism and racemization on solubility

After some pondering, I can see why the D-solution and the meso solution may have different solubilities; I would guess it is because of varying degrees of intramolecular H-bonding that can occur between the -OH and the -COOH groups. I would be grateful if anyone could formally justify this. 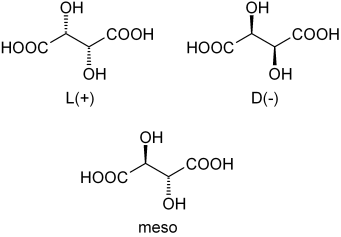 What surprised me, however, was the difference in solubility of the D-solution versus the racemic mixture. I would imagine that due to symmetry, every individual molecule of the acid in a racemic mixture would have an equal chance of being ionized/solvated as any other, as well as equal to the chances of molecules in a pure D-solution. Ergo, their solubilities should be identical. However, it appears my intuition is wrong here.

What is the reason, then, for these differences in solubility between the three types of solutions?

Indeed a racemic mixture can be considered - at least respect to collective properties - as a "third stereoisomer", so much that it deserves the special status of raceme.

Not only the 1:1 ratio of the two enantiomers results in optical inactivity, but its physicochemical properties differ from those of the two separated compounds.

As for the solid state, any single stereoisomer behave as usual. This means that the presence of a second compound lowers the melting point.

However, a stereoisomer can have a higher (lower) affinity and bound better to its specular companion as compared to itself. This could be due to a better filling of the space or the formation of H bonds at opposite sites of the molecules, for instance.

In this case, the addition of the L form to a pure D sample initially lowers the melting point. Nothing special here.

However, because of lattice symmetry, once the ratio becomes 1:1 a more stable structure is achieved and the sample has now a melting point higher than the two stereoisomers alone.

This is right the case for tartaric acid,

Now consider the Delta G for the solubilisation process. As correctly suggested in a comment, the equilibrium involves not only the solvated molecules but the solid lattice as well.

Standard thermodynamic consideration tell us that as the latter gets more stable, solubility at a given T gets lower

according to the experimental data that you have posted.

(Note that for both enantiomers and for all their mixtures the entropic terms are surely comparable and primarily dictated by the disruption of the solid lattice, especially so given the specular structure of the molecules).

Not the answer you're looking for? Browse other questions tagged organic-chemistry solubility stereochemistry or ask your own question.