Do electrons have some volume, area or shape?

I am in 8th grade now and when I was in 6th grade, my science book had diagrams of the electronic configuration of atoms. The electrons were round like spherical balls. Is it true that the electrons have some volume, area or shape and they revolve around the nucleus?

Atoms are composed of a positively charged nucleus and an outer shell of negatively charged electrons. When two atoms come into close proximity, their electron shells repel, preventing the atoms from sharing the same space. The "volume" of an object can generally be understood as the total measure of space that is unavailable for other objects to occupy, as the electron shells of the atoms of the two objects would repel, preventing the intruding object from entering that space.

This macroscopic conception does not apply to an electron. However, there are other measures of an electron that can be considered analogous to the dimensions of macroscopic objects. For instance, quantum mechanics states that all objects exhibit both wave-like and particle-like behavior (although, for larger objects, the wave-like behavior is insignificant). When an electron is analyzed as a wave, that wave has a wavelength, which is called the electron's "de Broglie wavelength". There is also a phenomenon called Compton scattering for which there is a characteristic length that is used in modeling the interaction between a photon and an electron. One could also ask "For what distance would putting two electrons at that distance require more energy than the mass-energy of the electrons?"

One thing to realize about science is that we use various words in everyday language without bothering to come up with a precise definition of what those words mean. We just have an intuitive sense of the general meaning of words. So when we start doing science, we build off of everyday language, taking everyday words as inspiration for precise terms, but we often have definitions that can be more or less precise than everyday meanings, or only loosely connected. For instance, "energy" in everyday meaning can refer to a wide array of concepts, such as "optimism", "enthusiasm", "friendliness", etc., but in physics it's much more precise. "Salt", on the other hand, in everyday meaning refers specifically to table salt, but in chemistry it is used more generally for ionic compounds. Words can have different definitions that are equivalent in everyday use, but they are distinct when we try to apply them to more exotic situations.

So while "Do electron have volume" may sound like an objective question, if we really look at it, it has to be understood as "Do electrons have a property that corresponds to the 'normal' concept of 'volume'?", and that question depends on how exactly one understand the "normal" definition of volume, how one defines that concept precisely, how one extends that concept to the microscopic realm, and what one considers to be a valid "correspondence".

It is generally accepted that physical laws are the same regardless of direction, and other than spin and some narrow symmetry breaking, electrons haven't been found to act different depending on direction. Which implies that electrons don't have a "shape" in the sense of "looking different" from different direction. So, if they are modeled as having a shape, it makes sense to have that shape be a sphere, possibly pictured with a vector representing spin.

Also, saying that they "revolve" around the nucleus is a simplification. Position and velocity are, somewhat like volume, concepts for which there are rough analogues in quantum mechanics, but they aren't quite the same. In a spherical orbital, an electron has a certain probability of being observed at each location, and this probability is the same for all points at the same distance from the nucleus. So even though the electron has a quantity that is referred to as "velocity", it is some sense not moving (in the sense that the probability of it being found in a particular location is not changing over time). Even though the electron's wavefunction is "moving", the magnitude of the wavefunction is not changing, and so it is both moving in one sense, and not moving in another. Actually explaining this clearly requires getting into quantum mechanics.

Quoting from the Nobel lecture of Hans G. Dehmelt (1989):

With the rise of Dirac’s theory of the electron in the late twenties their size shrunk to mathematically zero. Everybody “knew” then that electron and proton were indivisible Dirac point particles with radius R = 0 and gyromagnetic ratio g = 2.00. The first hint of cuttability or at least compositeness of the proton came from Stern’s 1933 measurement of proton magnetism in a Stern-Gerlach molecular beam apparatus. However this was not realized at the time. He found for its normalized dimensionless gyromagnetic ratio not g = 2

Similar later work at still higher energies found 3 quarks inside the “indivisible” proton. Today everybody “knows” the electron is an indivisible atomon, a Dirac point particle with radius R = 0 and g = 2.00.... But is it? Like the proton, it could be a composite object. History may well repeat itself.

So there is no evidence that the electron is anything but a point particle, yet a non-zero size has not been ruled out either.

Missing from detailed answers above, in wikipedia page on electron https://en.wikipedia.org/wiki/Electron ,

Observation of a single electron in a Penning trap suggests the upper limit of the particle's radius to be $10^{−22}$ meters.

From what I have read, electrons are indivisible and have a charge of -1, and they have mass unlike photons (light), even if smaller than protons, so they must have some kind of volume and area maybe. If they have a surface to be observed, well they can be observed thanks to light and because photons are smaller so they can go, hit the electron and come back making an image which will only be like a printing, like they always do with the eye, but unfortunately, an electron's image is at the current state, quite imprecise because the few photons that can reach it even with max precision lasers cant hit the whole surface drawing a complete matrix of it. The beam would always be too big to perfectly and fully scan one electron. For the question do they go around the atom, yes but there are more complex diagrams at university showing the orbitals and the fact that electrons must occupy some zones around the atom, and run around only in these sections, like rooms (they are called "Orbitals"). Some rooms are rings that go around the atom too, but most of the rooms are like 'tears'? around the atom where the electrons spin and give then mass to the atom. What creates this perfect order of rooms is unknown by science so far.

And this is how it would look the image of an electron in my humble opinion :) It would just be the print of the few photons that bounce on it and come back :) assuming the wavelength is high enough to mantain a straight trajectory till the photons hit the particle. Tell me what you think, sorry I have just windows paint 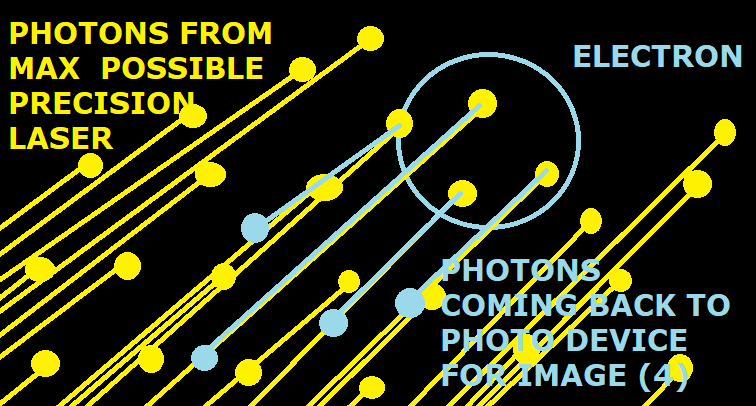 4
Basic Intro to Quantum Chemistry. Two Slit Experiment and Bohr Model
2
Why are these ions classified as isoelectronic?
8
Significance of phase of atomic orbitals
17
Can two electron occupy the same spatial spot in a statistical way?
4
Volume of orbitals
14
What to do with (large) imaginary frequencies for constrained minimum structures?