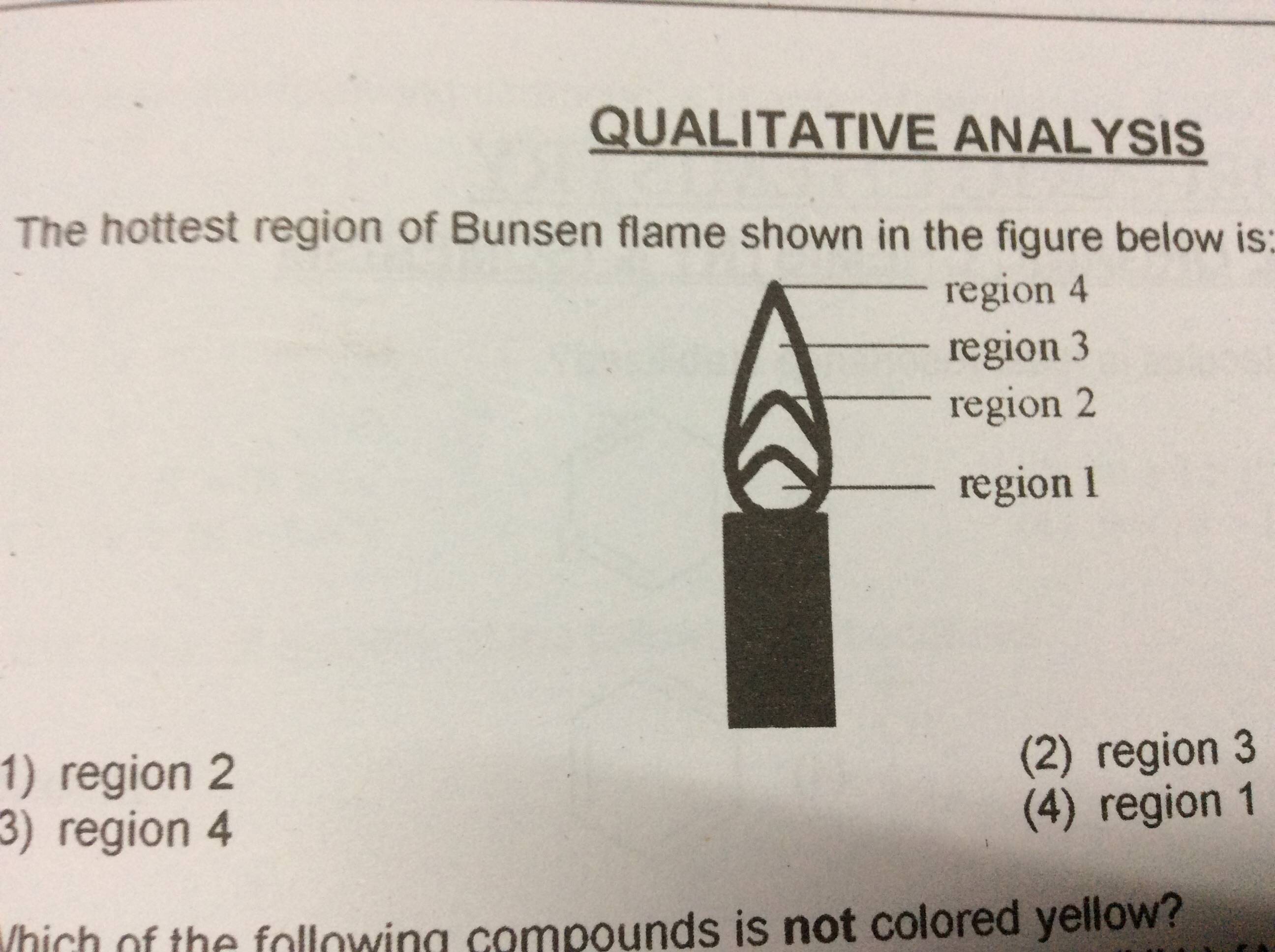 Since region 1 is closer to the source, I presume it to be the hottest as complete combustion takes place there. Also, this is the part where the gas mixture(responsible for flame) reacts with oxygen first(as soon as valve is open). So, the reaction should take place much quicker and more heat should be released. But in my book, the answer is given as region 2. Where am I wrong?

I know there exists as question similar to this in our community : Bunsen burner and hottest part but the answers don’t answer my question.

The question itself is poorly written as given.

The diagram should have "regions" and "points." 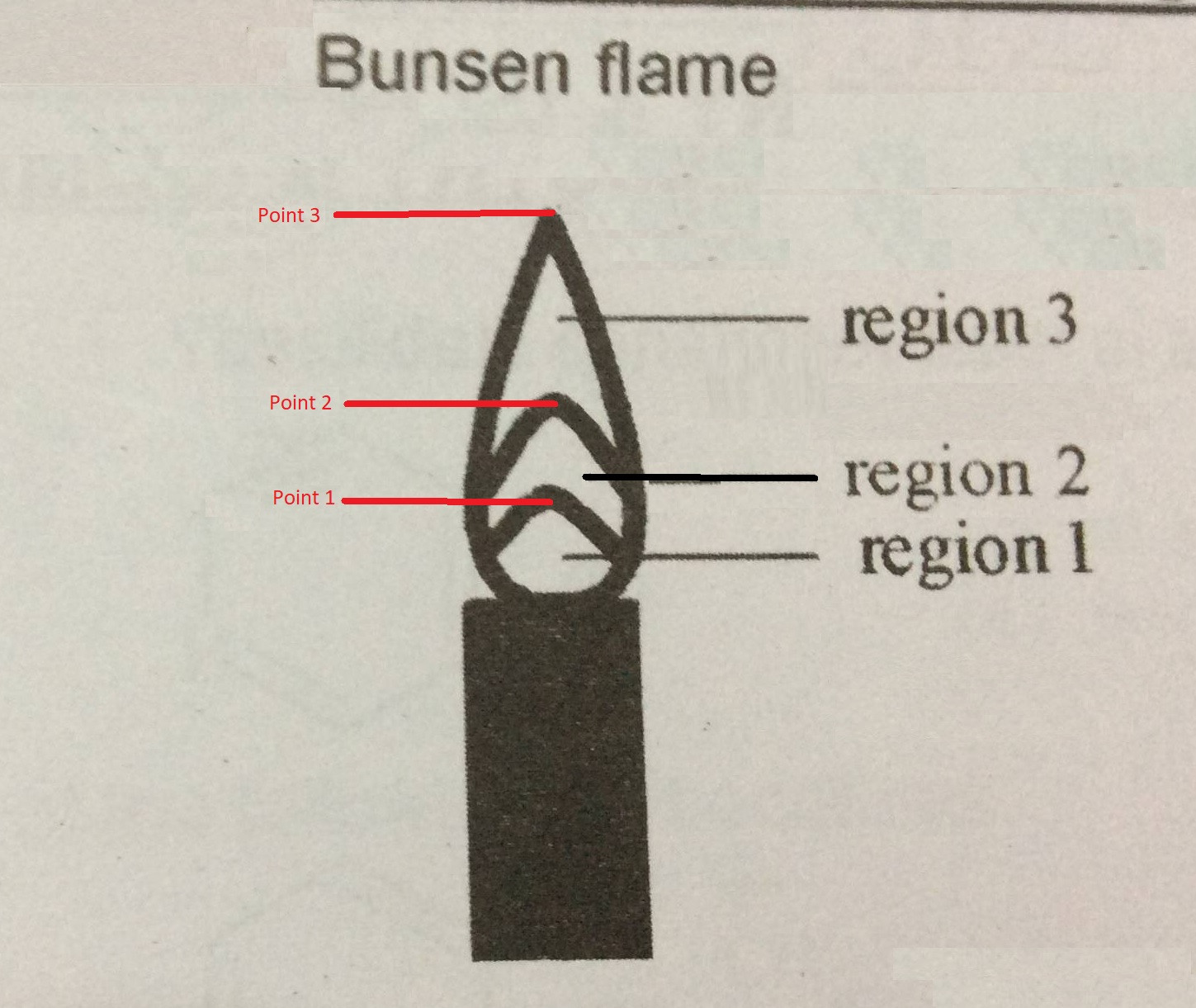 Region 1 is where the mostly unburned gas and oxygen mixture are pushing above the lip of the Bunsen Burner. Region 1 exists because the gas coming out of the tube is cool. If the air port is open and the gas flow is too low then the gas will start to burn down the tube and you'll get a "strike back" where the flame is either (1) blown out or (2) burns at the jet. If the gas flow is too great you can blow the burning region off contact with the upper tube. If you increase the gas flow even more then you can in fact blow the flame out.

Region 2 would be a reducing region within the flame. This region is hot and burns the fuel and oxygen coming out of the tube.

Region 3 would be a oxidizing region of the flame. Here oxygen from "outside air" (oxygen which didn't come up the tube) is migrating into the flame to burn the excess fuel which is not bunt in region 2.

You'd use the reducing and oxidizing regions when doing bead tests for identification.

Point 2 would be the hottest part of the flame as shown by the composite image of a paperclip in the flame from the YouTube video. 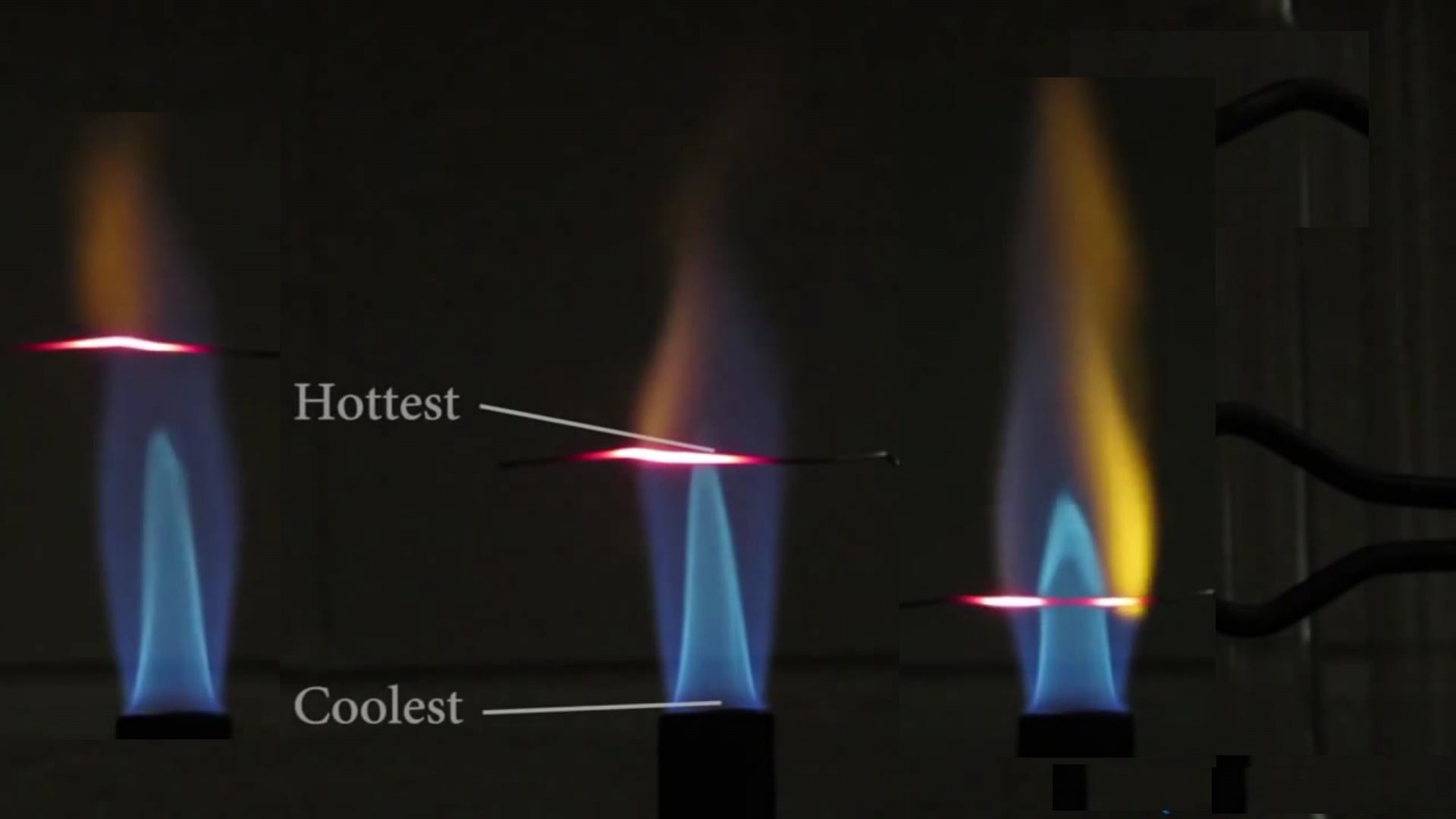 Region 1 is much cooler because it contains a mixture of gases that it unreacted.

The gases in the tube are traveling too fast for the flame to enter the tube.

The inner cone is this unreacted gas mixture as it exists the tube.

12
Why is the outermost part of the Bunsen burner flame not the hottest region?

3
Color imparted to flame and color of coordination compounds
9
Why lithium gives flame coloration?
1
Spectrometry in Chemistry & Flame Test Lab
12
Why is the outermost part of the Bunsen burner flame not the hottest region?
0
Why flame color of salts is determined by metal
13
Any substance too poisonous to measure an LD50?
2
Is it possible to predict the color of the flame test result based on the element's structure?
2
How could I produce/rig this flame-colour lottery?
16
Using a gas stove instead of Bunsen burner for a flame test?