My approach:- In intramolecular reactions between aldehydes and ketones, the base extracts $\ce{H}$ from the carbon adjacent to ketone (making it a nucleophile) as the carbonyl carbon of aldehyde has more positive character, thereby rendering attack by the ketonic nucleophile easy. But here case is between ester and ketone.

One can argue that esteric $\ce{H}$ (Marked 1) should be extracted by the same logic as the ketonic carbon has more plus character. Another factor is that if the $\ce{H}$ near ketone is extracted, then it can remove the $\ce{C2H5O^-}$ group(as it is a better leaving group).

So, which effect dominates? I am unable to decide. 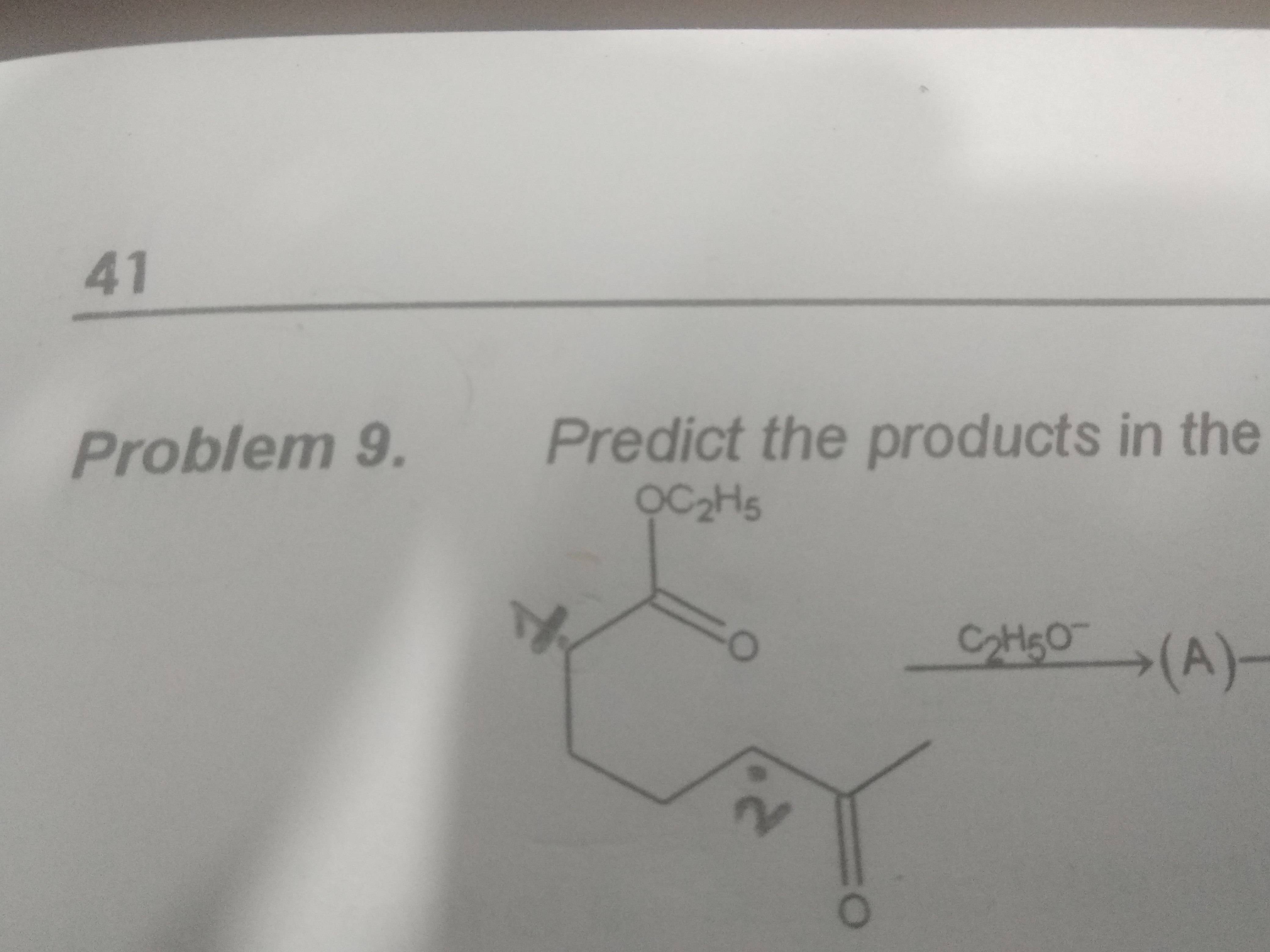 Your immediate concern seems to be which hydrogen is abstracted, 1 or 2, in structure 1 (see below). Examination of pKa’s is useful. pKa’s: EtOH, 16; alkyl ketone, ~20; aliphatic ester, ~25; and β-diketone, ~9; aliphatic carboxylic acid, ~5. Clearly, alkyl ketones are more acidic than aliphatic esters. The methyl ketone hydrogen 3 in structure 1 is slightly more acidic than the methylene hydrogen 2 as evidenced by the haloform reaction. But this subtle point is immaterial here. More importantly, the question is what is the structure of A and how is it formed? [A appears to be an intermediate but you have not shown the whole question.] For the sake of discussion, let’s assume that we are dealing with concentrated NaOEt/EtOH. All of these enolates are undergoing proton exchange under the reaction conditions and the concentrations of the enolates are relatively low.

There are two possible reaction pathways to consider. The enolate 2 adds to the ester carbonyl as in intermediate 3. This step is reversible (blue arrows) but elimination of ethoxide leads to β-diketone 4, which, given its low pKa, is irreversibly deprotonated to enolate 5. Acidification of enolate 5 provides β-diketone 4, aka A.) The ring closure (2 → 3) occurs through a 5-membered ring transition state that is more favorable than a 7-membered ring transition state resulting from the enolate of the methyl ketone of 1. This reaction must be conducted with at least stoichiometric base because the alkoxide is consumed in the reaction 4 → 5.

The alternative pathway (1 → 6 → 7 → 8 → 9) invokes the ester enolate adding to the ketone. All of these steps are reversible except perhaps 9 → 8. The irreversible formation of β-diketone channels the reaction irreversibly in the direction of 5. If the formation of unsaturated ester 9 is irreversible, then pathway 1 → 4 is faster than 1 → 9. Can one argue that the pathway 1 → 4 is preferred because there is more ketone enolate than ester enolate? Not necessarily!

Consider the reaction of cyclohexanone (10) with diethylsuccinate (11) under a variety of basic conditions (Stobbe condensation). The product of this reaction is the carboxylate salt 15. Here it is the ester enolate that adds to the ketone! The favorable 5-membered ring lactone formation (12 → 13) leads to the irreversible elimination 13 → 15. Alternatively, the addition of the cyclohexanone enolate to the ester group of diethyl succinate (11) would lead to the irreversible formation of β-diketone enolate 17. In spite of the fact that there is expected to be a preponderance of ketone enolate in this route, it does not prevail! 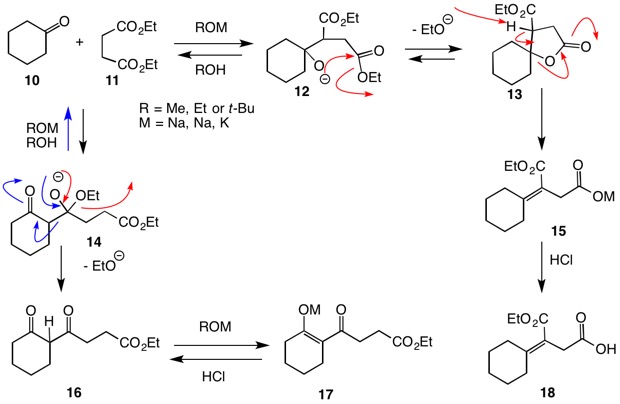 The hydrogen near the ketone will be plucked.

Ketones and esters both have carbonyls. The oxygen of the carbonyl pulls electrons away from the carbonyl carbon. Thus, both carbons (in the ester and the ketone) have partial positive charge.

Ketones have 2 alkyl groups bonded to the carbonyl. The partial positive charge is partially releived by the +I effect due to these groups.

Esters have an alkyl group and an alkoxy group attached to the carbonyl. The alkyl group is responsible for a +I effect and the alkoxy group provides a +M (positive mesomeric) effect, which is stronger than the +I effect.

Thus, there is more partial positive charge on the carbonyl carbon of the ketone.

The lone pairs on the oxygen of the alkoxy group further destabilise the enolate.

Not the answer you're looking for? Browse other questions tagged organic-chemistry aldol-reaction or ask your own question.

0
Why only ketone forms enolate in Claisen condensation between ester and ketone?

6
Protonation of ketone and ester
5
Most stable conformation of aldehydes and ketones
9
Grignard reagent reaction mechanism: Which bond breaks during the decomposition of the adduct?
1
Question on organic chemistry where we are required to find enol content
7
NGP mechanism vs the simple carbocation mechanism
4
Acidity of aldehydes and ketones and enolate formation
5
Major product for aldol condensation between acetophenone and acetaldehyde
0
Why only ketone forms enolate in Claisen condensation between ester and ketone?
0
ketone and amine condensation