Why does the SnAr reaction proceed by the Meisenheimer complex?

I am studying SNAr mechanism from this webpage. I am confused as to why this convoluted mechanism occurs. It seems as though we simply create an anion when the hydroxide attacks in order to quench it directly after by pushing out the chloride. Why does the hydroxide not push out the chloride in a typical substitution reaction? Also, what evidence do we have for the Meisenheimer complex actually forming? 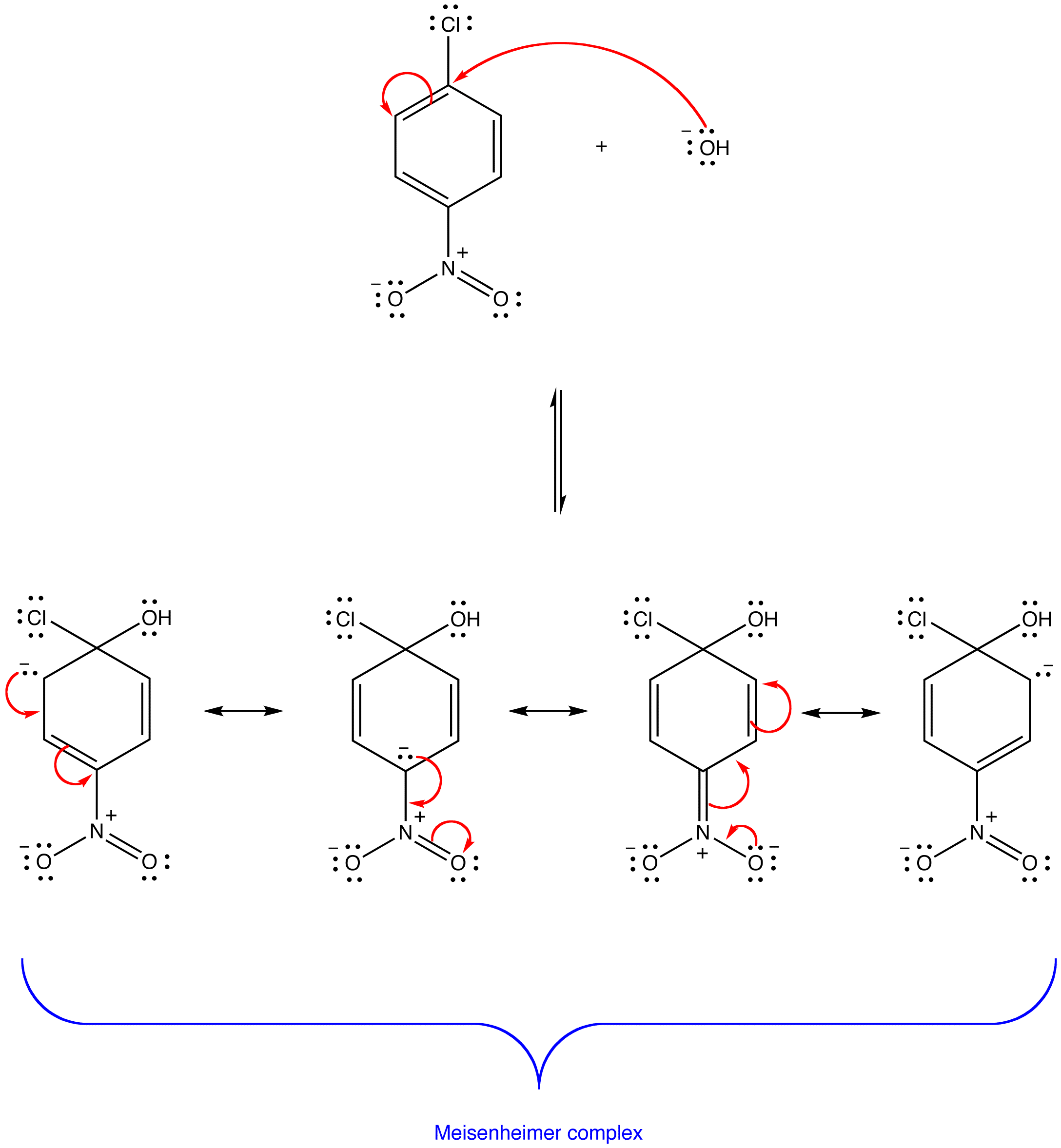 Basic level explanation: SN2 occurs only at sp3 carbons, where you can get backside attack.

Intermediate: Addition to the double bond generates a highly stabilized anion. This is a lower energy transition state than the concerted SN2.

Well, you do not typically find substitution reactions occurring at olefins. Think about it.

You would come up with a sort of situation where the 'leaving group' would be a lone pair of electrons (C-C $\pi$ electrons). This has been done with organometallic reagents like lithium organocuprates, involving oxidative addition and reductive elimination sequences. But that is typically not the nucleophilic substitution that organic chemists like to think about.

So, in this case, 'pushing out' the ipso chloride in an SN2 fashion is not an option. In fact, the ipso position will often have a fluoride to stabilize the Meisenheimer complex.

And because this is an equilibrium process, you often find that the reaction is being driven forward by some means, because a lot of the intermediates are pushed back to the starting material. In this particular case, I think deprotonation of the final product (p-nitrophenol) would be a suitable way.

As for the evidence of existence of the Meisenheimer complex, I'll point you to the first compound/intermediate here. The steric factors of the ethoxy groups prevent the collapse of the adduct.

I've just been reading an article in the September 2018 issue of Chemistry World "Textbook aromatic substitution mechanism overthrown". Apparently there's a recent paper (I haven't read it yet, but I intend to) claiming that in most cases the reaction is concerted, without formation of a discrete Meisenheimer intermediate. (Ref E E Kwan et al, NAt. Chem. 2018, 10, 917 (DOI: 10.1038/s41557-018-0079-7)

51
Regioselectivity of acid-catalyzed ring-opening of epoxides
0
Why does this reaction not proceed by sn1/sn2?
2
Why does 1,2-dichloro-4-nitrobenzene undergo SNAr para and not meta to the nitro group?
4
Why does the E1cb mechanism proceed in the specific way it does?
14
Are nucleophilic aromatic substitutions stepwise or concerted?
3
Why is this diagram depicting the molecular orbital (MO) basis for a back-side attack the way it is?