Why does radical chlorination and bromination of propane occur at different positions? 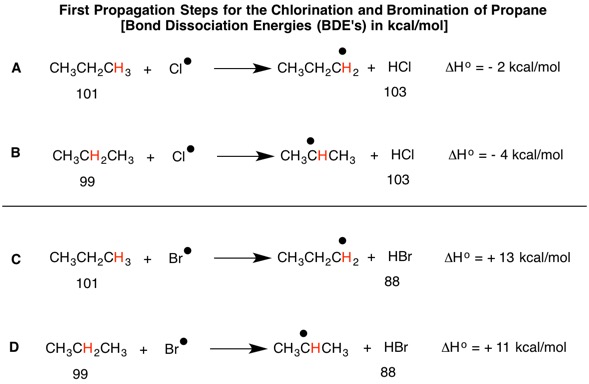 The data for methane in the chart below is instructive. Fluorination has a very low Ea and it is more exothermic than chlorination. A fluorine atom is virtually indiscriminate in choosing among primary, secondary and tertiary C-H bonds. The less reactive chlorine atom has a higher Ea and shows greater discrimination. While these two halogenations are readily conducted at ambient temperature, bromination is conducted at elevated temperature to obtain useful rates of reaction. With a high Ea selectivity is the greatest with bromination.

To put a folksy spin on the discussion, a bromine atom has more "time" to make choices as to what C-H bonds it is capable of breaking while a fluorine atom is virtually a bull in a china shop. 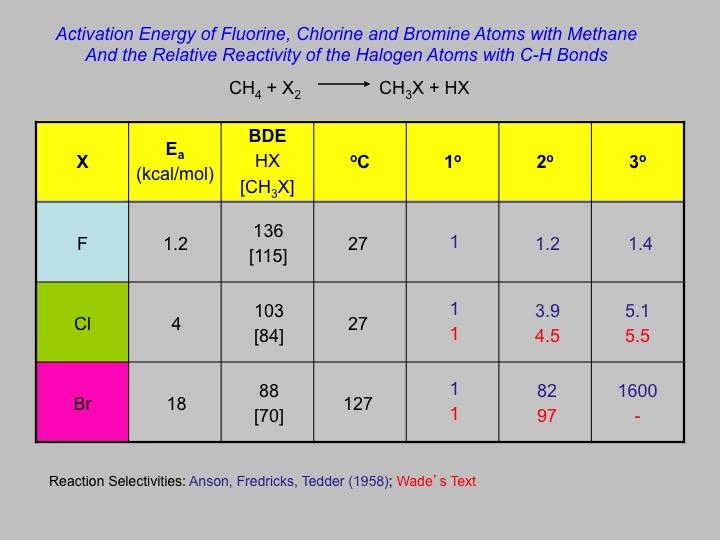 Not the answer you're looking for? Browse other questions tagged organic-chemistry hydrocarbons radicals regioselectivity or ask your own question.

35
Why do SN1 and SN2 reactions not occur at sp2 centres?
7
Predicting the products of the radical chlorination of propane
1
Aromatic Apparent Substituion Reaction Mechanism
4
Why do the halogenations of benzene and toluene lead to different products?
16
What is the perfect definition for chirality?
7
Why is free radical chlorination exothermic whereas bromination is endothermic?
2
Reaction of cyclohexene with hydrochloric acid