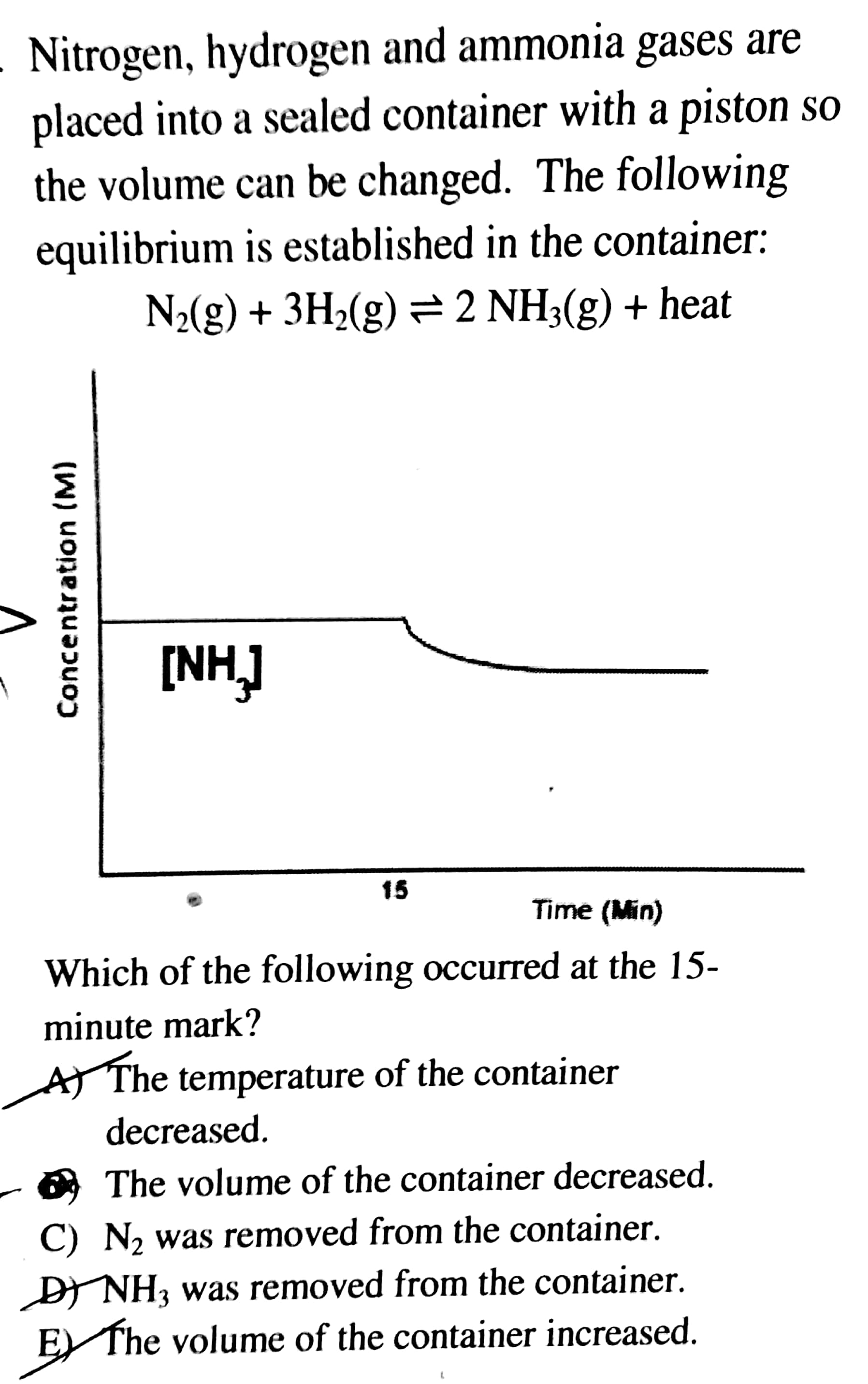 Decreasing the product's concentration seemed to follow the logic of Le Chatelier's principle, so a decrease in volume will force the reaction to the left to increase the pressure (increasing the number of molecules). However, decreasing nitrogen gas concentration also has the same effect. I chose volume compression over the other because I assumed. I am probably stretching what it means by "sealed" though. Apparently I got the question incorrect.

The given graph indicates that $\ce{[NH3]}$ remains constant till the 15 minute mark which implies that the equilibrium was established till then. Now, after the 15 minute mark, $\ce{[NH3]}$ decreases and reaches a constant value which means, the equilibrium was disturbed and re-established. $$\ce{N2 + 3H2 <=> 2NH3 + heat}$$ Since we observe a decrease in $\ce{[NH3]}$, the reaction must have shifted in the backward direction according to the given equilibrium.
Out of the five options, only match for this is (C) removing some amount of $\ce{N2}$. Let us analyse the other four options,
(A) Decrease in temperature: Note that the above reaction is exothermic and hence according to Le Chatlier’s principle, the reaction shifts in the forward direction for a decrease in temperature.
(B) Decrease in volume: Since we are dealing with a gaseous(ideal) equilibrium, a decrease in volume implies an increase in pressure and hence, according to Le Chatlier’s principle, the reaction shifts in the direction where there is less no. of moles ie., forward direction here.
(D) Removal of $\ce{NH3}$: As Gaurang pointed out in the comments, removal of $\ce{NH3}$ will cause a sharp fall along a vertical line, but the graph indicates a gradual fall in $\ce{[NH3]}$. Hence this is also not valid.
(E) Increase in volume: Assuming a sudden increase in volume, say n times, $\ce{[NH3]}$ should also fall by n-times. Clearly, the graph doesn’t match with our condition. Hence this is also incorrect.

So (C) must be the correct answer, as removing some $\ce{N2}$, shifts the reaction in the backward direction, thereby decreasing $\ce{NH3}$ gradually till equilibrium is re-attained.

Not the answer you're looking for? Browse other questions tagged equilibrium concentration or ask your own question.

0
What is the effect of adding HCl on a certain solution at equilibrium?
0
Prove that a Change of Volume will not Change the Value of the Equilibrium Constant
13
Le Chatelier's principle: Are there any exceptions?
6
Equilibrium between barium carbonate, and barium oxide and carbon dioxide
0
Equilibrium, temperature change, and prediction in constant volume
1
Increase in equilibrium concentration of the reactant via decrease in container volume