What is the major product when cyclohex-1-ene-1,2-dicarboxylic acid is electrolysed? 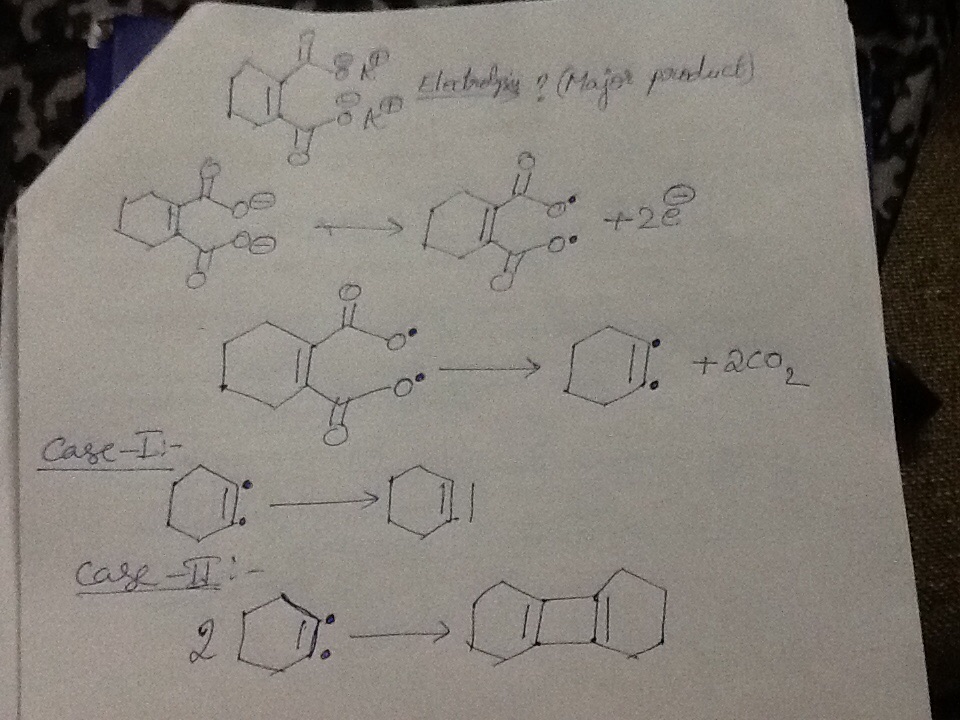 I got 2 cases but I am unable to decide which product is major, and need help here.

This is because, again quoting the simple language:

Because of the linear nature of the $\ce{C–C≡C–C}$ alkyne unit, cycloalkynes can be highly strained and can only exist when the number of carbon atoms in the ring is great enough to provide the flexibility necessary to accommodate this geometry. (self-emphasis)

Hence, your case I is invalidated.

Regarding case II, the middle four-member ring has $\ce{4\pi}$ electrons in conjugation in a planar system. By Hückel's rule, this ring will be anti-aromatic, and therefore, will not exist.

Therefore, we can say that both the cases are not favorable.

Correction: I initially mentioned that the electrolysis is probably unfavorable, both due to the theoretically unfavorable molecules I and II, and a lack of favorable research data on Google Scholar for "electrolysis of "cyclohexene-1,2-dicarboxylic acid"" or "decarboxylation of "cyclohexene-1,2-dicarboxylic acid"". However, Avnish's answer demonstrates dimerization of cyclohexyne to a more stable form, though not exactly obtained from electrolysis, but which seems very plausible. So, I am compelled to say - at least with this much data - that the electrolysis seems favorable.
With that said, however, case I and II are certainly still not the major products (not even minor).

Turns out a similar reaction has been performed, the reaction proceeds via the following mechanism 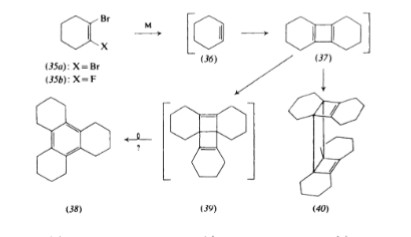 The cyclohexyne dimerizes to 1,2,3,4,5,6,7,8-octahydrobiphenylene. Then further rearranges. So I would say that electrolysis is feasible with rearrangement as depicted in the picture .
The second compound(1,2,3,4,5,6,7,8-octahydrobiphenylene) which you've drawn is more stable since very unstable compounds (cyclohexyne) do not form even more unstable compounds. The second compound will not be the final product/major product owing to its high instability due to anti aromaticity.

PS
I haven't delved into the details regarding the instability of cyclohexyne and 1,2,3,4,5,6,7,8-octahydrobiphenylene since they have been well covered in Gaurang's answer

Without data on the actual products, no serious prediction can be made. Therefore I will make a wild guess:

The diradical, if it formed would be vinylic: very reactive. It would abstract hydrogen atoms from allylic positions of the unreacted cyclic diacid dianion so the first product would be 1,3-cyclohexadiene.

More likely, the electrolysis would produce a monoradical which would pick up a single hydrogen to give cyclohexene 1-carboxylic acid as a first product. If this became the major product and was decarboxylated in a second step, it would also give 1,3-cyclohexadiene.

However, with radicals being formed from a starting material that has allylic hydrogens, I predict that the major product will be tar. Poly-tar.

3
Electrophilic Substitution
2
Products for the hydrogenation of the cycloalkene in (3R,4R,5S)-4,5-diamino-3-(pentan-3-yloxy)cyclohex-1-ene-1-carboxylic acid
1
Decarboxylation under acid, water, and extreme heat
0
Acid catalysed dehydration of unsymmetric alcohols
0
Can pthalic acid or 1,2-Benzenedimethanol be possible products of Cannizzaro reaction of phthalaldehyde?
4
Is cyclohexane‐1,3‐dicarboxylic acid a correct IUPAC name?
9
How to make cyclohex-4-ene-1,2-diol from cyclohexa-1,4-diene?