Most basic nitrogen in Adenine

I need to find the most basic site of Adenine: 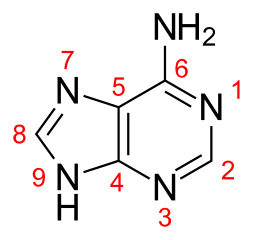 But is this correct, I still cannot decide which is the strongest basic site.

To add: Both $1,3$ nitrogen have two nitrogen in neighbourhood which destablise their conjugate acids by $-I$ effect. So still I can't decide.

Adenine undergoes two ionization reactions. Density function calculations in the gas phase carried out by Russo et al. (1998) indicate that protonation occurs preferentially on the N1 nitrogen of the 6-member ring, in good agreement with the assignment given by Christensen et al. (1970b). The anionic species with a proton-deficient 5-member ring is the most stable.

HOMO of adenine is formed essentially by the lone pairs of all nitrogens. The orbital of the amine group contributes with the higher coefficient, and that of $\ce{N}$1 with the lower one. On the basis of this information, $\ce{N}$1 protonation might be the less favorable process. On the contrary, the molecular electrostatic potential map (Fig. 5) indicates that $\ce{N}$1, $\ce{N}$3, and $\ce{N}$7 are the better candidates for proton attachment. In particular, the $\ce{N}$1 and $\ce{N}$3 regions appear to be favored over $\ce{N}$7. Experimentally, the preferred protonation sites of adenine are $\ce{N}$1 and $\ce{N}$3 with the former slightly favored.[reference 18] Our computation favors protonation at $\ce{N}$1 over those at $\ce{N}$3 and $\ce{N}$7 by $1.12$ and $\pu{7.38 kcal mol-1}$, respectively. This trend is in agreement with previous theoretical computations.[reference 17] From bond orders analysis (see Fig. 6), and due to the small energy difference it is possible to view the $\ce{N}$1 and $\ce{N}$3 protonated forms in $\ce{N}$1 the double bonds occur in $\ce{C}$4—$\ce{C}$5 and in the $\ce{C}$2—$\ce{N}$3 positions, whereas, in the second, in the $\ce{C}$4—$\ce{C}$5 and $\ce{N}$1—$\ce{C}$2 positions as two resonance hybrids of a unique structure with a consistent charge delocalization. This observation allows better insight into the reason for which the protonation on the five-membered ring is unfavorable. In fact, as shown in Figure 6, the positive charge appears to be distributed only on the $\ce{C}$8 and $\ce{N}$9 atoms, because it is evident that no interactions exist between the two rings upon protonation.

Not the answer you're looking for? Browse other questions tagged organic-chemistry acid-base resonance dna-rna or ask your own question.

3
Are aromatic amines or amides less basic?
25
Electrophilic Aromatic Substitution: Are protonated OH-groups ortho-/para- or meta-directing?
10
Protonating/basic site and Brønsted basicity orders of beta, gamma, and delta lactams
6
Comparing basic strength of nitrogen heterocycles
0
Basic strength of nitrogen
0
Which of the following is the most basic compound?
8
Why is 4-hydroxypyridine more acidic than benzoic acid?