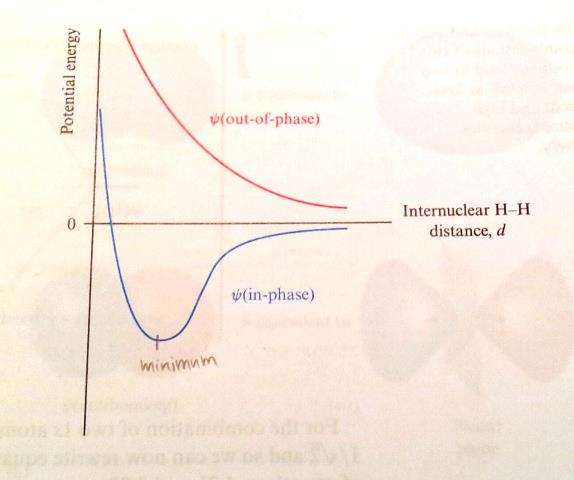 In the text, it states the following:

The in-phase-function has a stabilized minimum, but the out-of-phase-function seems stable only at an infinite distance. For my intuition, the two graphs should be symmetric, since the two wavefunctions are alike and approach each other equally. Why do they behave like this?

Why are those functions not symmetric?

A following question would be, when I combine those two functions, I'll get a minimum at the x-value I marked with "minimum". Would this be the distance at which a nucleus in a stable diatomic molecule would be found like in this figure?

Thank you for your help and have a nice day :)

So somehow this all factors into each other and in the end gives you the curves (for the potential energy of the system vs. internuclear distance) that you posted. Where is the symmetry? Well, it is still there, with respect to the center of one atom. If you imagine rotating the functions around the $y$ axis, you will get a symmetric image. And you're allowed to do this because space expands in all three directions. So in theory (if you follow through and expand the function to everywhere) you get a 3D image of the energy at every point around one atom.

But: The wavefunction in itself is not all that interesting to us, because there is no "real" physical information that can be directly extracted from it. But fret not, we can at least get out the electron probability density by complex-squaring it: $$ \rho = |\Psi|^2 = \Psi \Psi^* $$

And this is where those nice small bubbles come into play that we see in your second figure. And we have again found the symmetry that you seek, because both linear combinations have $D_{\infty h}$ symmetry (I think... I'm not all too good with point groups and the such).

Not the answer you're looking for? Browse other questions tagged physical-chemistry molecular-orbital-theory or ask your own question.

21
Is the Springborg 6D phase space model used in modern molecular orbital modeling?
10
Calculating Commutator of Differential Angular Momentum
1
How to figure out which phase on a phase diagram will be the most dense?
4
How derive g and u symmetry labels for orbitals?
2
Is it possible for three carbon double bonds to form next to each other in a carbon chain?
0
CO : CO₂ ratio when given amounts of carbon and oxygen react with each other
4
What is the exact definition of the radial distribution function?
4
How are the Van der Waals constants a and b related to each other?
0
What does it mean by “ concentrations are (value) in relation to each other”?