Bond angles in NH3 and NCl3

The bond angle in a molecule is inversely proportional to the electronegativity of the surrounding atom if the central atom is same. This also happens with $\ce{NH3}$ and $\ce{NF3}$, as bond angle in $\ce{NH3 > NF3}$.

As Tan Yong Boon stated, it is Bent’s Rule with which we can explain the lower bond angle of $\ce{NF3}$ when compared to $\ce{NH3}$. The rule as stated by Henry Bent:

Fluorine is more electronegative that hydrogen, and the $\ce{N−F}$ bond would have greater p character than the $\ce{N−H}$ bond. And more s character leads to large bond angles. Thus, the bond angle is greater in $\ce{NH3}$ than in $\ce{NF3}$.
Now, consider $\ce{NCl3}$. Clearly, $\ce{Cl}$ atom islarger in size than the central atom, nitrogen. Hence the higher bond angle here is due to the steric crowding caused by $\ce{Cl}$ atoms.(More pronounced than the electrongativity of $\ce{Cl}$ atom). They repel eachother and hence bond angle increases. This is not the case with small $\ce{H}$ atoms around the nitrogen in $\ce{NH3}$. Therefore, the $\ce{Cl-N-Cl}$ bond angle of $\ce{NCl3}$ is greater than $\ce{H-N-H}$ bond angle of $\ce{NH3}$.

The bond angle of a molecule depends on several factors. We have to look at all the factors and then decide the result according to them.

The difference in bond angles in $\ce{NF3}$ and $\ce{NH3}$ is only determined by the electronegativity difference between the central atom and the bonded atom. As $\ce{F}$ is more electronegative than $\ce{H}$, in $\ce{NH3}$, bonding electron pair shifts more towards $\ce{N}$ than they shift in $\ce{NF3}$. So, the bond angle increases. There is no other effect at all in this case.

But in the case of $\ce{NCl3}$, you can notice there is a lone pair on the central $\ce{N}$ atom. Most importantly, there is an introduction of vacant low lying $\ce{3d}$ orbital of $\ce{Cl}$ where the lone pair of $\ce{N}$ can delocalise. This effect is known as $\ce{p\pi-d\pi}$ backbonding. So, due to this backbonding, which is quite strong, the bond between $\ce{N}$ and $\ce{Cl}$ adopts a significant double bond character.

Although the electronegativity difference is decreased in the case of $\ce{NCl3}$ and bond pair is shifted away from central $\ce{N}$, this introduction of double-bond character increase the repulsion between the bond pairs even more, and that's why the bond angle increases.

So, in case of $\ce{NF3}$ and $\ce{NH3}$ there was no vacant and valence d orbitals either in $\ce{F}$ or in $\ce{H}$. So, this backbonding doesn't occur there. But in $\ce{NCl3}$, the case is different and more factors determine the bond angle. As the backbonding is much stronger, this effect overall dominates over the electronegativity factor and make the bond angle increase.

Some search on bond angle data for NCl3 and NH3. Many places, it is mentioned that bond angle of NCl3 > NH3 but no references are given. I looked around to find some experimental data on this. To my search bond angle in NCl3 (107) < NH3 (107.8).

Here are the references for my analysis.

In case of NCl3: (1) http://www.chm.bris.ac.uk/motm/ncl3/ncl3js.htm (2) https://en.wikipedia.org/wiki/Nitrogen_trichloride#cite_note-2 In case of NH3 See book: Chemistry of Elements by N N Greenwood and Earnshaw (second edition) 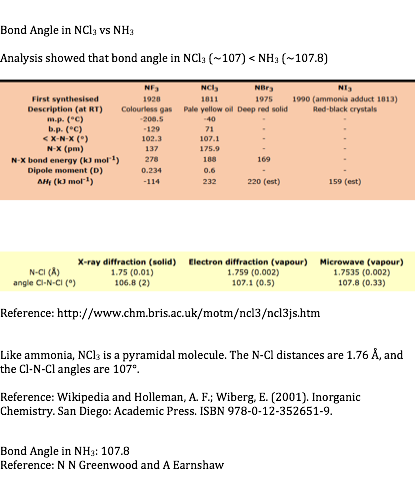 Not the answer you're looking for? Browse other questions tagged inorganic-chemistry bond electronegativity or ask your own question.

13
How do electronegativity and lone pairs affect bond angles?
10
Why does SO2 have a larger bond angle than H2O, H2S, and NH3
14
Why can NCl3 be hydrolyzed but CCl4 cannot?
1
Relation between various bond angles of Nitrogen compounds
4
Bond length increase when replacing nitrogen with phosphorus for NH3 and NF3
8
Why does NF3 have a smaller bond angle than NH3?
3
Comparing bond angles in carbonyl dichloride and carbonyl dibromide
1
Why do CCl4 and CH4 have the same bond angle?