I simply assumed the super-leaving group $\ce{-OTs^-}$ would leave, forming a primary ethylbenzene carbocation. That would rearrange via a hydride shift to form a secondary carbocation on $\ce{C^*}$ atom. The nucleophilic $\ce{-OH}$ group of the $\ce{-COOH}$ group will then attack and lose a proton to form 1-phenylethylethanoate (with the ester linkage at the $\ce{C^*}$ carbon): 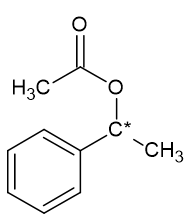 However, my book has instead taken a different route. In the very first step, after $\ce{OTs-}$ leaves, they have taken the NGP mechanism and formed this transition state:

and said that now the $\ce{OAc-}$ will attack either of the two carbons (in that trigonal ring). Hence, according to their logic, both types of 1-phenylethylethanoate will be formed - one with the ester linkage at the $\ce{C^*}$ carbon, and the other at the $\ce{C}$ carbon.

I have confirmed from Clayden (Chapter 37 Rearrangements page 976) that the product ratio is indeed 50:50. So:

It also gives the exact same example as your question:

Notice that both products are given to be exactly 50% each.

NGP is very often faster than bimolecular reactions as for the latter to take place two molecules have to collide first.

1:1 ratio can be attributed to the fact that in NGP the transition state involves loss of aromaticity BUT NGP supports the ionization of the starting material.

There are a lot of examples this one reaction isn't a black swan. Interested readers may see chapter 36: Participation, rearrangement and fragmentation in Clayden to find more details and examples.

14
What's the mechanism of the reaction of (E)-methyl 3-(furan-2-yl)acrylate in acidic methanol?
5
Esters of catechol - Fries rearrangement
3
Alternative mechanism for carbocation rearrangements
4
Deciding more electrophilic centre between ester and thioester for SN type reaction
4
Are allylic tertiary alcohols oxidized by the Jones' reagent via a classical carbocation intermediate?
0
Same set of carboxylate reagents yielding two different products with an alkylide
4
Determining the stereochemistry of the product(s) when an alkyl shift in a carbocation generates a chiral carbon
3
Attack on cyclic intermediate during NGP