How to determine the angle between non-bonding electron pairs?

Is there a way to determine the angle between non-bonding electron pairs that aren't obvious? Take $\ce{H2S}$ for example: 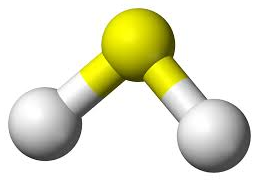 The two non-bonding electron pairs would be at the yellow end of this molecule, but I am curious as to what the angle is between them? Is there even a way to tell?

Yes, there are ways one could claim to calculate an angle between two non-bonding electron pairs.

BUT: As Mithoron points out, this Chem.SE question illustrates how quantum chemical calculations and photoelectron spectroscopy both demonstrate the non-equivalence of the lone pairs of $\ce{H2O}$, an analysis which presumably applies equally well to the analogous $\ce{H2S}$. Thus, the methods used for calculating such an angle will be controversial, and the results may or may not be of any particular practical value given that they're at odds with PES data. That being said, I'll show here one way that a putative 'non-bonding electron pair angle' can be calculated.

The calculation below is based on application of the quantum theory of atoms in molecules (QTAIM) to the quantity called the electron localization function (ELF), which is a scalar function in $\mathbb R^3$. QTAIM is useful for identifying intrinsic features of various three-dimensional fields that arise in quantum chemical calculations, with a significant focus placed on the 'critical points,' where the field gradient is zero. It was originally developed for analysis of the electron density distribution, but has been extended to the ELF and other quantities. One of my favorite papers illustrating coupled QTAIM/ELF analysis is a 2009 review by Matito and Solà (Coord Chem Rev 253: 647); it also discusses the localization and delocalization indices (see here and here), which I won't go into in any detail here.

My answer here provides a more concrete example of how the electron localization can differ significantly among systems whose electron density distributions are otherwise relatively similar. It also anticipates the discussion below, noting features of the three-dimensional ELF field that suggest the locations of electron lone pairs on N, O and F atoms. It is this ELF field that I will be focusing on in the following analysis.

H2S.xyz was an initial geometry file generated by Avogadro, overwritten with the optimized geometry at the end of the ORCA run. The inputs for $\ce{H2O}$ and $\ce{H2Se}$ were identical except for the identity of the central atom; I added relativistic effects for $\ce{H2Te}$ via the ! ZORA simple keyword, and for $\ce{H2Po}$ via the use of a 60-electron effective core potential by adding ! ECP{def2-TZVP,def2-TZVP/J}. (While there is an argument to be made that I perhaps should've included relativistic effects for $\ce{H2Se}$ also, I expect them to minimally affect the geometry and overall valence-electronic structure of that system, which is what is of interest here.)

I generated a MOLDEN wavefunction file for each computation, to serve as inputs to Multiwfn. Using $\ce{H2S}$ as an example, the shell command was:

I then renamed the resulting H2S.molden.input to H2S.molden, which is necessary for Multiwfn to correctly identify it as an ORCA-generated MOLDEN file.

After loading H2S.molden into Multiwfn, I used the following series of commands to locate the 3-D maxima ("attractors") of the ELF distribution:

Multiwfn's search routine found six ELF attractors, one of which was identified as a cluster of 'degenerate attractors'. The figure below plots these attractors (via Multiwfn sub-command [0] and some MS Paint manipulation) atop two different views of the $\ce{H2S}$ molecule (click to enlarge): 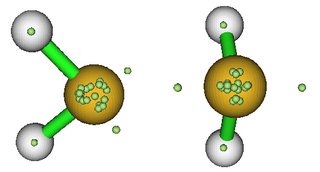 As can be seen, there are two attractors located right where chemical intuition would expect lone pairs to sit, along with two more attractors located at the hydrogen atoms. The final non-degenerate attractor is right in the center of the sulfur atom, and could be interpreted as representing the $n=1$ core electron shell. The degenerate attractor is distributed around the $n=1$ attractor, and could similarly be interpreted as the $n=2$ core electron shell. Interestingly, the two $n=3$ valence electrons of the sulfur that are involved in bonding to the $\ce{H}$ atoms do not exhibit independent attractors---each shares an attractor with the electron originating from its respective hydrogen atom.

So, leaving the question of actual physical significance aside, I would argue that these ELF attractors provide a reasonable representation of the (non-)bonding structure of the molecule. Thus, to the main question: what is the structure? Conveniently, angles and distances among the attractors and atoms can be calculated via Multiwfn sub-command [-2]:

(In the above, the actual nuclear positions of the atoms were used where relevant, not the positions of the associated attractors. While each such attractor generally falls close to its associated nucleus, it's usually displaced by a tiny amount, $<0.1\,\mathrm{Bohr}$. I've always attributed this to numerical precision limits of the calculation methods, but I don't know for sure if that's what causes it.)

Therefore: By this QTAIM/ELF method, the angle between the two lone pairs of $\ce{H2S}$ is calculated to be $127.8^\circ$. This is considerably greater than the $\ce{H-S-H}$ angle, consistent with the intro-chem conception of the increased 'steric bulk' of a lone pair.

Due (presumably) to numerical precision limitations, the calculated values of the four different $\ce{H-x}\ce{-lp}$ angles for each system varied by $1^\circ$ or so; I've reported the means of the obtained values above.

Those at home who are doing their math carefully will note that there is some electron density missing in the systems with the heavier central atoms. This is because at the 'high' grid quality used, the deep core electrons are poorly captured by the numerical integration involved. (Indeed, the deep core electrons may not be accurately captured at just about any computationally reasonable grid size!) I think the $\int_\text{lp}{\rho}$ and $\int_{\ce{x}\ce{-H}}{\rho}$ values should be pretty reliable, though.

In general, the $\ce{x}\ce{-H}$ and "$\ce{x}\ce{-lp}$" bond lengths increase as the central atom is varied down the group, which is unsurprising ("bigger atoms are bigger"). Interestingly, while the $\ce{x}\ce{-lp}$ distance starts out considerably shorter than the $\ce{x}\ce{-H}$ bond length for $\ce{x}=\ce{O}$, by the time one reaches $\ce{x}=\ce{Te}$ the relative magnitudes are reversed. I don't have a particularly good explanation for this trend; presumably it's due to some sort of counterbalance between the nucleus-nucleus repulsion and nucleus-electron attraction forces.

Where these results are particularly dramatic is in the clear trends in the bond angles: as the central atom is made heavier, the $\ce{lp-x}\ce{-lp}$ bond angle increases markedly while the $\ce{H-x}\ce{-H}$ and $\ce{lp-x}\ce{-H}$ angles steadily decrease. The lone pair 'steric bulk' apparently increases uniformly down the group for this series of analogous systems, at least as determined by this QTAIM/ELF approach. The answers to this question provide more detail into the physical reasons for this decreasing trend in $\ce{H-x}\ce{-H}$ bond angles.

Not the answer you're looking for? Browse other questions tagged bond electrons molecular-structure or ask your own question.

45
Why does bond angle decrease in the order H2O, H2S, H2Se?
39
Are the lone pairs in water equivalent?
22
What is charge shift bonding?