Why doesn't the bromide anion attack during electrophilic addition of bromine in methanol solvent?

It is known that addition of bromine (in methanol) to ethene will yield 1-bromo-2-methoxyethane. The reaction proceeds with the formation of a bromonium intermediate in the first step. In the second step, methanol attacks either carbon through the lone pair on its oxygen atom. In the last step, the $\ce{CH3OH+}$ loses a proton, which combines with the bromide anion obtained in the first step, to release $\ce{HBr}$ as a by-product.

My question: Why doesn't the $\ce{Br-}$ (obtained in the first step) attack as a nucleophile in the second step?

There's a very simple explanation for this. Your reasoning regarding $\ce{Br-}$ being a better nucleophile is absolutely correct. The reason as to why methanol attacks instead of $\ce{Br-}$ is because it is the $\mathsf{\color{red}{solvent}}$. The solvent concentration is simply too high. Only one $\ce{Br-}$ is generated.

More or less the answer is this paragraph from J. Clayden - section "Unsymmetrical bromonium ions open regioselectively" in chapter 20 "Electrophilic addition to alkenes" :

...when a bromination is done in a nucleophilic solvent—water or methanol, for example—solvent molecules compete with the bromide to open the bromonium ion. As you know, alcohols are much worse nucleophiles than bromide but, because the concentration of solvent is so high (remember—the concentration of water in water is $\pu{55M}$), the solvent gets there first most of the time. This is what happens when isobutene is treated with bromine in methanol. An ether is formed by attack of methanol only at the more substituted end of the bromonium ion. 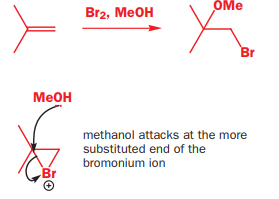 Note: Concentration of pure methanol is around $\pu{24.75 M}$, calculated from the density given on ChemSpider

5
Formation of azobenzene from nitrosobenzene and N-hydroxyaniline
6
Bromination of alkenes
8
Is the rate of an SN1 reaction really independent of the type of nucleophile?
0
Which base accepts the proton abstracted from water in propyne hydration?
1
Generalizations regarding functional groups on benzene ring
0
In halogenation of ethene using bromine for example, why does the lone pair of bromine attack the C atom?
2
Why does Oxygen act as Nucleophile over here?
4
Finding major product when bromonium compound is acted upon by a nucleophile
1
Carbocation stability + determining position of attack on a carbocation in SN1 reaction