Comparison of acidic strength between nitric acid and nitrous acid

These are the structures of nitric acid and nitrous acid respectively: 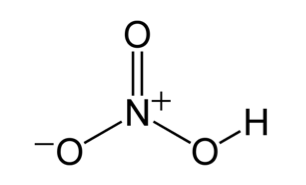 To compare acid strength, we compare the stability of the corresponding conjugate base. Here conjugate bases are nitrate and nitrite anions respectively.

Now, my point is that in $\ce {NO2-}$, the resonance effect is pronounced, but in the case of $\ce {NO3-}$, we have a case of cross resonance. Put simply, in $\ce {NO2-}$ the negative charge de-localizes to double bonded oxygen atom. In the case of $\ce {NO3-}$, same thing happens, but we have another $\ce {O-}$ here due to which there is a cross of 2 resonance effects (If I am using the correct terminology). So, resonance effect of nitrate ion should be weaker than nitrite ion and therefore nitrite ion should be more stable.

If I am true then nitrous acid must be a stronger acid, but all my sources suggest otherwise. They insist that in $\ce {NO3-}$, the negative charge is distributed over 3 oxygen atoms, and hence its resonance is more powerful. My confusion is that there are also 2 negatives that need to be stabilized as opposed to one negative in $\ce {NO2-}$.

So what concept am I missing here?

The correct terminology is "cross conjugation" and "extended conjugation" (but the latter makes more sense in the context of more than two pi bonds, as in penta-1,3,5-triene).

Now, you have correctly identified that the nitrate anion has cross conjugation while the other has simple conjugation. However, you've incorrectly concluded one of them to be more stable. The conclusion is incorrect because there is a much dominant factor at play instead.

The three canonical resonating structures of the nitrate anion are "equivalent" i.e. wherever the negative charge may delocalise, the new resonance structure is exactly the same as the original one. Therefore, all the resonance structures are "equivalent" in their potential energy. This leads to a much rapid delocalisation of the lone pair, between the three oxygen atoms, leading to a rapid charge dispersal.

Both nitrate and nitrite anions have equivalent resonating structures. But, in the former, the negative charge is dispersed over three oxygen atoms (instead of only two in nitrite). From this, we conclude that the nitrate anion is much more stable than the nitrite anion.

Therefore, the next time you apply the fact that cross conjugation imparts lesser stability than extended conjugation, do look out for this additional dominant factor of "equivalent resonance"!

Not the answer you're looking for? Browse other questions tagged inorganic-chemistry acid-base resonance or ask your own question.