Reaction of cyclohexene with hydrochloric acid

What happens when cyclohexene reacts with concentrated hydrochloric acid?
I formed the carbocation intermediate by protonating cyclohexene.
But now I am stuck. I know the end product will be a dimer.
I tried to form a bond between the intermediate and cyclohexene like this.

Then through rearrangement the plus charge will shift to 3 degree carbon.
In the answer there is a double bond between the two rings. That's where I am stuck . I can not think anything further.

Have a look at the mechanism for the dimerization of cyclohexene in strongly acidic medium: 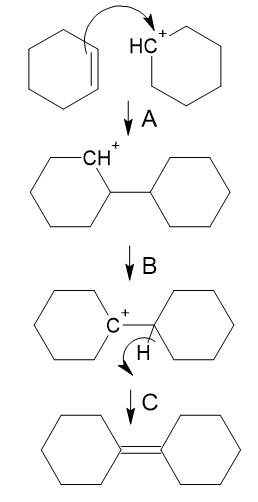 After the attack of a nucleophile (pi bond) on the electrophilic carbocation, we have:

The double bond was formed because of the loss of the $\ce{H+}$ ion in step C, formation of a negative charge at that position, and then the delocalisation of that negative charge into the adjacent empty p-orbital (of the $\ce{C+}$ position).

Then through rearrangement the plus charge will shift to 3 degree carbon.

You're nearly there.
I suggest you draw the 3° carbocation out and think a bit more.
Hint: Hyperconjugation

Then after the said rearrangement, visualize the lose of proton from the second tertiary carbon atom, giving you your desired product.

2
Do hydroxymethyl-substituted cyclopropylmethyl cations undergo ring expansion?
2
What happens when prop-2-en-1-ol reacts with concentrated hydrogen bromide
2
Mechanism of acid-catalyzed addition of water across an alkene
1
Can some one please explain alkyl shifts for me
10
Why does a proton prefer to attack a double bond instead of protonating an alcohol in a reaction of unsaturated alcohol with sulphuric acid?
2
Reaction between anisole and concentrated HI in excess
3
Rearrangement in dehydration of alcohol
4
Acid catalyzed bromine substitution in an alcoholic ester. What is the major product and why?