Why are arenes with conjoined benzene rings drawn as they are?

Whilst we are taught to represent benzene as below (A) due to its delocalised electrons, however when two benzene rings share carbons (e.g. naphtalene) it seems to be more commonly represented in textbooks as two conjugated rings (B). Whilst I realise that the result is the same, what is the advantage gained by drawing them like this rather than (C)? Is it simply a matter of clarity?

Whilst draing those in Marvin I wondered if it was as the delocalisation between the shared carbons isn't shown? I.e. it looks like the electrons are delocalised across both rings separately rather than as one big ring?

Questions about why we represent things in one way or another are hard to answer in general, because they appeal to one’s sense of taste… de gustibus non est disputandum. Here, I want to state the position and the reasoning of IUPAC on this matter. The relevant publication on this are the IUPAC 2008 Recommandations, titled Graphical representation standards for chemical structure diagrams (IUPAC Recommendations 2008) [1].

Section GR-6 of the report deals with “Aromatic rings and other types of electron delocalization”. I quote part of it (emphasis is mine):

GR-6.5 Curves should only be used when delocalization is being represented

The text then goes further to note:

It is generally not acceptable to use curves in two adjacent fused rings, since such diagrams are at best ambiguous in terms of the character of the shared fusion bond between the two rings.

PS: hmm, the leader for the IUPAC report works at CambridgeSoft…

Both ways of drawing benzene should mean the same thing to you. Use one or the other depending on what you want to express.

The Kekulé structure, B, is more useful when you're interested in a reaction mechanism, or to visualize bonding once aromaticity is lifted. Here is an intermediate way to draw it, which is aesthetically more pleasing (to me): 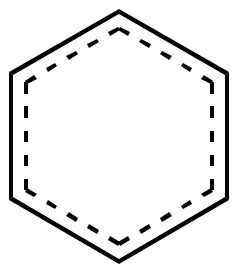 The A and C structures are called Clar structures, but they first appeared in reference 1. Actually, C is nonsensical. A circle represents a sextet of $\pi$ electrons, like those of benzene. Naphtalene has only 10 delocalized electrons. After all, it is aromatic, and thus possesses 4n+2 $\pi$ electrons.

Here are the rules for drawing Clar structures:

Read reference 2 for more information on Clar structures and their use in theory.

With drawing it as in diagram B, although we lose the information that the electrons are in reality delocalized, it makes for easier electron accounting when we start "pushing electrons" (that is to say, in illustrating the mechanism of a reaction).

The thing is that representing electron delocalization in Lewis structures requires crutches like resonance structures or that circle/circle arc business. At least you can say that there's an electron pair in a single bond. How many electrons are there in the circle?

If you don't deal much in the illustration of reaction mechanisms, I suppose the first and third drawings are okay. My point is that those circles don't really play nice with arrows.

3
Why does this compound have two benzene rings?