How to find the bond order in delocalized pi bonding of more than two atoms? [duplicate]

J.D Lee has written down some rules for calculating the bond order. 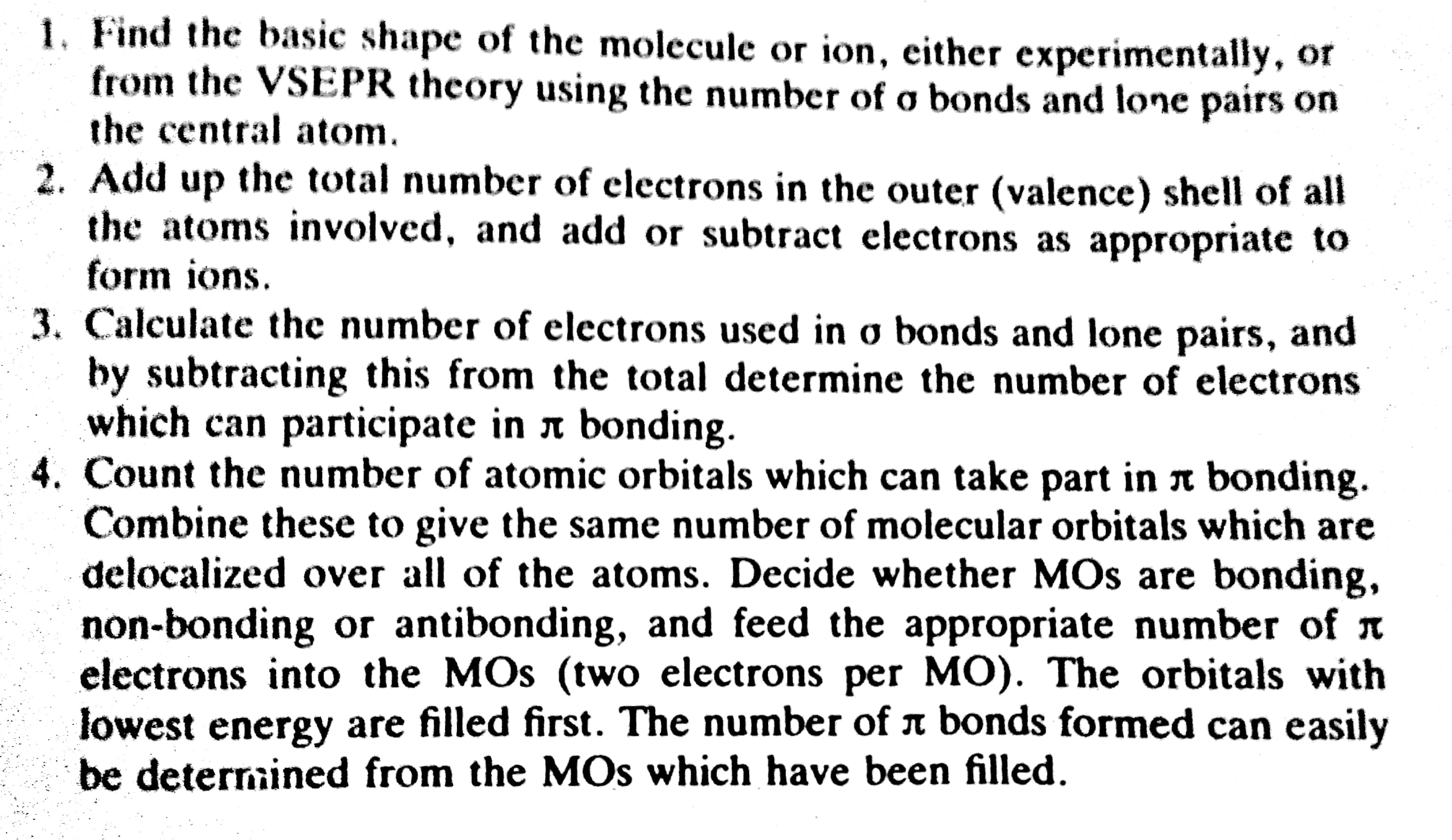 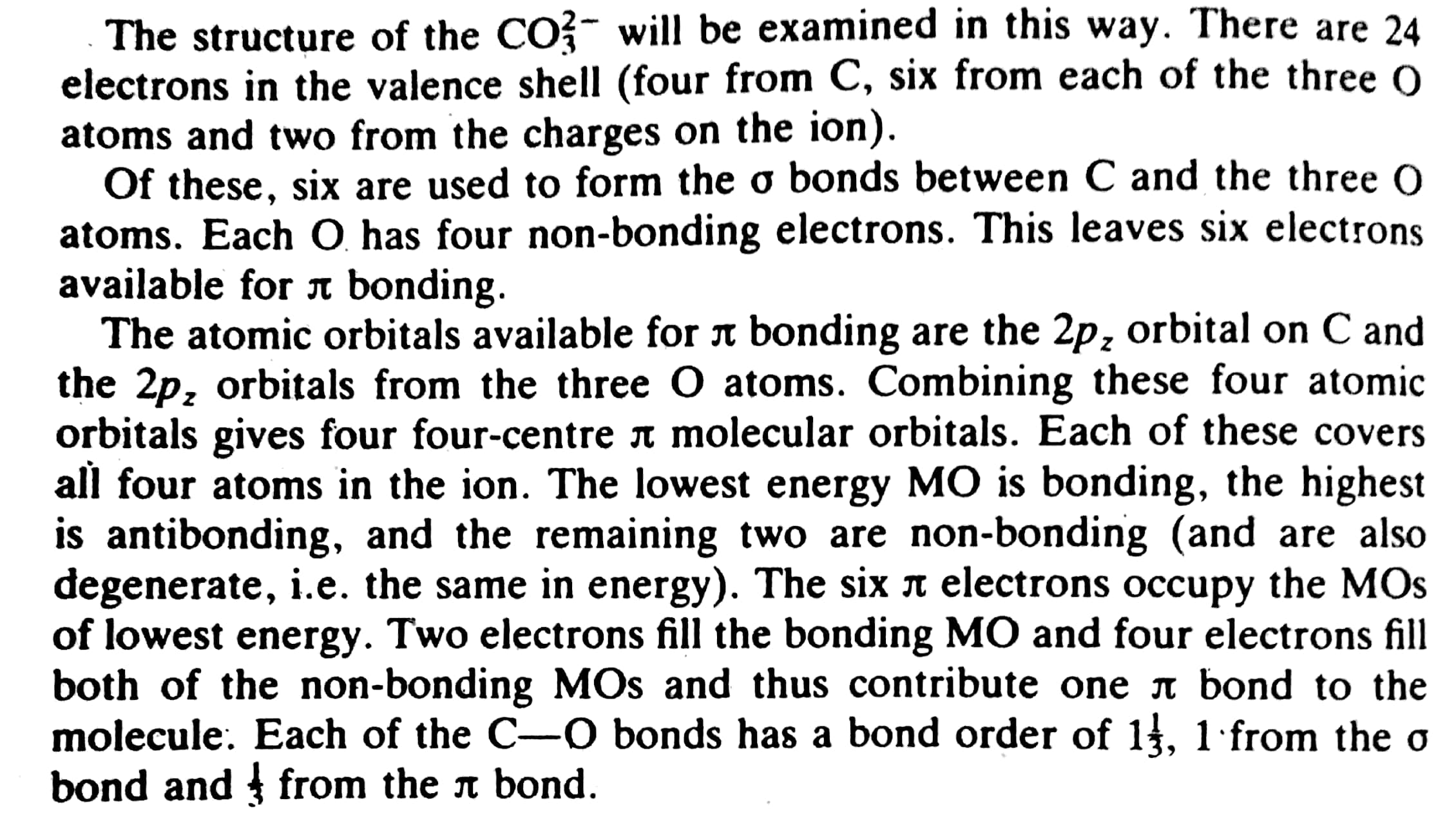 Now, the parts I have difficulty handling

Why some electrons are $\mathrm{\sigma}$-bonding, $\mathrm{\pi}$-bonding or non-bonding is easier to understand if you first think about the orbitals involved. I'll discuss it in terms of hybridisation.

Each of the $\mathrm{sp^2}$ orbitals has symmetry properties suitable for $\mathrm{\sigma}$-bonding with the $\ce{O}$ atoms - they are axially symmetric around the line connecting the $\ce{C}$ and $\ce{O}$ nuclei and have no nodes. They are aligned and overlap with the $\mathrm{2p_x}$ orbitals of the oxygen atoms, allowing for effective bonding. So we can build three $\mathrm{\sigma}$ bonds that take up 6 electrons, and we have 18 electrons left.

Two of the orbitals in each $\ce{O}$ atom cannot overlap in a bonding way: the $\mathrm{2s}$ orbitals because they are too small and localised, and the $\mathrm{2p_y}$ orbitals because they have opposite sign lobes at each side of the $\ce{C}$-$\ce{O}$ axis - so the overlap with the carbon orbitals is zero. These two orbitals per $\ce{O}$ atom will hold two pairs of non-bonding electrons - for a total of 12. So, we have 6 electrons left.

Finally, we have four $\mathrm{2p_z}$ orbitals (one on the carbon atom, three on the oxygen atoms) which have a symmetry suitable for $\mathrm{\pi}$-bonding (they are parallel, with the nodal plane in the plane of the molecule). Combining them will require a molecular orbitals approach and take us to point 4.

So, we have 4 suitable $\mathrm{2p_z}$ orbitals and 6 electrons left. Combining these to form $\mathrm{\pi}$ molecular orbitals is a bit more complex, though, as symmetry plays a very important role, so outside from simple cases, the results may not be immediately obvious.

So now we wonder: how do these symmetry adapted orbitals interact with the lone carbon $\mathrm{2p_z}$ orbital?

It turns out, one of those orbitals (identified in the image as $\mathrm{\Psi_1}$) has a non-zero overlap with the carbon $\mathrm{2p_z}$ orbital, while the other two ($\mathrm{\Psi_2}$ and $\mathrm{\Psi_3}$) have an overlap of zero (because of signs and symmetry). And since overlap is a requisite for bonding, these two linear combinations will be non-bonding orbitals (i.e. they will have the same energy in the $\ce{CO_{3}^{2-}}$ molecule as they would have in the isolated oxygen $\mathrm{2p_z}$ orbitals).

So, what about the symmetry adapted linear combination that did have the correct symmetry to interact with the carbon $\mathrm{2p_z}$ orbital? They do interact, forming two combinations: one which is more stable than the independent orbitals, and therefore a bonding molecular orbital, and another that is less stable and therefore anti-bonding.