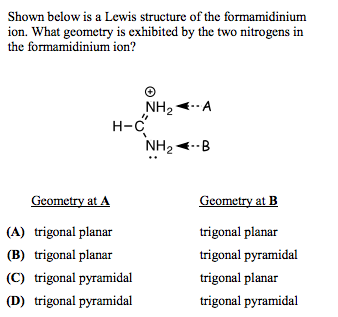 23
How to rationalise the resonance structures and hybridisation of the nitrogen in a conjugated amine?

7
Shape and polarity of the iodate ion
3
Electron Pair Geometry in Ibuprofen (Electron Pair Geometry in Organic Compounds)
7
What is the molecular geometry of NHF₂?
2
Is the VSEPR theory correct in determining the bond angle of sulfur dioxide?
13
Are carbocations necessarily sp2 hybridized and trigonal planar?
4
Shape of urea molecule around N atom
1
What is the geometry of a tri-substituted methyl free radical?
4
How to understand the role of the lone pair on the molecular structure when it participates in resonance?