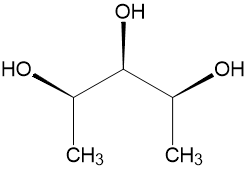 At first glance, without deciding the configurations at each chiral carbon, we can clearly see that this molecule has a plane of symmetry, perpendicular to the plane of paper and passing through the $\ce{-OH}$ and $\ce{-H}$ on the 3rd carbon atom.

However, if we then sit down to compute the R/S configuration at carbons 2 and 4, we find them to be R and S respectively. Thus, going by the definition of a pseudo-chiral carbon, given in Gold Book as:

we would infer that the 3rd carbon is indeed pseudo-chiral. This is confirmed by ChemSketch which generates the name of the above compound as "(2R,3s,4S)-pentane-2,3,4-triol".

I have looked at several questions on pseudochirality here, yet I have been unable to resolve this conundrum. I believe I am using a wrong fact or a misguided inference, but whatever is it, I am unable to grasp it, and thus need help resolving the conundrum.

The Gold Book definition for a meso compound is

the achiral member(s) of a set of diastereoisomers which also includes one or more chiral members.

So, a meso compound has chiral subsets. Here we would have three such subsets:

Even though the centermost carbon is pseudo chiral, the plane of symmetry still exists. The compound remains meso, achiral.

Nomenclature is just for naming a compound.

The following two molecules are diastereomers, not enantiomers.

For the examples I've looked at, a small (r) or (s) is used for the pseudochiral carbon instead of (R) or (S). For example, see this section in Wikipedia. That means that this is not a real stereocenter. But we do need to assign something because there is intrinsic stereochemistry because it has relative stereochemistry with the two enantiomeric substituents, and changing the center produces diastereomers. As you noted, the reason it's a pseudocenter is because it cannot be a full stereogenic center by symmetry.

(2R,3s,4S)-Pentan-2,3,4-triol is a meso compound owing to the plane of symmetry. C2 and C4 are both chirotopic and stereogenic. Thus the R/S designation. C3 is ACHIROTOPIC and stereogenic (pseudoasymmetric). Hence, the lower case "s" (C3-OH>C2-R>C4-S>H, which are the CIP priorities). Inversion of C3 leads to a new meso diastereomer (2R,3r,4S) that has the same chirotopicity and stereogenicity at the three centers as did the original triol. To invoke enantiomers one needs the pair (2R,4R) and (2S,4S). C3 in each of these enantiomers has no designation (non-stereogenic and chirotopic) because inversion returns the same enantiomer. For a discussion of stereogenicity and chirotopicity in lieu of "pseudoasymmetry", see Mislow, K. and Siegel, J., J. Am. Chem. Soc., 1984, 106, 3319.

So the configuration you have given is obviously meso, but as a whole if you ignore the stereochemistry in the structure then for this compound you have 4 isomers: 2 optically active and two meso (these two meso compound arising from the 3rd carbon being stereogenic)

3
What kind of optical activity requires chirality?
40
How to derive these general formulae for number of stereoisomers of a compound with a possible plane of symmetry?
19
What is the perfect definition for chirality?
2
How to draw Fischer projections for carbon chain having more than two carbons?
1
Which one of the following is optically active?
2
Can chiral atoms have same substituents but with different orientations?
2
What is the number of stereoisomers for hex-4-en-2-ol?
1
Example of an achiral molecule without a plane of symmetry or inversion center?
2
How can a compound having a plane of symmetry be Chiral?