Sodium and potassium produce a strange liquid, why the liquid explode when it gets contact with water? [duplicate]

I saw an experiment sodium and potassium mixed together to produce a liquid alloy but when the liquid get contact with water then some kind of explosion occur.

Why the explosion occur when the liquid made contact with water?

Same explosion will occur if it would get contact with other form of liquid?

This site provides an explanation about the mechanism of the explosion.

...causes an explosion because the metal dissolves, generating an extreme amount of heat and transferring electrons to the water. The dissolution step also generates steam and forms hydroxide ions and hydrogen, which can be ignited, making the process even more energetic.

Some researchers have puzzled over how the process can occur so quickly, though. They recognized that the steam and hydrogen generated early on in the reaction should form a buffer layer over the metal surface and impede water from continuing to react.

...within a fraction of a millisecond of making contact with water, the Na/K droplets form numerous spikes that protrude into the water. Molecular dynamics analysis indicated that nearly instantaneous transfer of electrons from the spikes to the water rapidly generates positively charged alkali ions, which vigorously repel and cause a so-called Coulomb explosion. It is the speedy manner in which that process propagates and generates reactive metal surfaces that triggers the overall explosion.

The researchers have figured out many of the key aspects that enable this highly exothermic reaction to become explosive, rather than self-quench. 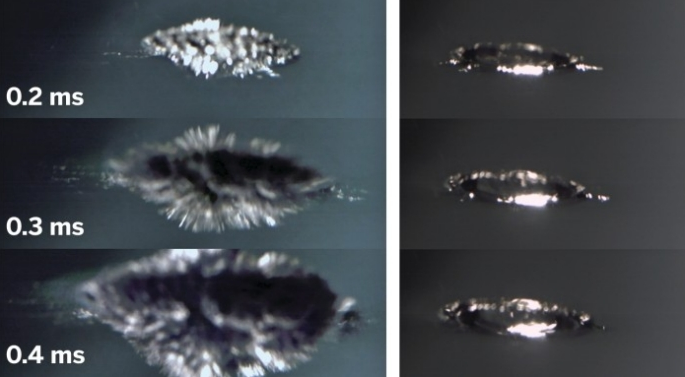 It does not generally reacts with any other liquids. Hence they are stored in mineral oil.

It is highly reactive with water and is stored usually under hexane or other hydrocarbons, or under an inert gas (usually dry nitrogen or argon) if high purity and low levels of oxidation are required.(Wikipedia)

37
What exactly is happening when sodium, potassium, or other alkali metal explodes in water?