I'm trying to understand how to draw molecular orbital diagrams, since I'd like to use the molecular orbitals to determine the total state of the molecule (i.e. $A_1$, $B_1$ etc.), so I prefer the notation with irreducible representations of orbitals like it's shown in this video for $\ce{H2O}$.

But now I have no idea how to proceed. Should I work with both nitrogen atoms together, i.e. with group orbitals, similarly to the case with two hydrogen atoms in $\ce{H2O}$? Or am I supposed to work with them separately?

So could you please write down one of the diagrams using irreducible representations and explain it step-by-step? I think it would be really useful here, as I couldn't find any source with some general explanation.

Because this is a diatomic molecule, there are no group orbitals. Put another way, the group orbitals are the molecular orbitals. Knowing the nitrogen atomic orbitals (AOs) and their irreducible representation (irrep) labels is enough.

Since we'll work in the $D_{\mathrm{2h}}$ point group, we need its character table:

Using the nitrogen atom's electron configuration $\ce{1s^{2} 2s^{2} 2p^{3}}$ as our minimal basis, no d-orbitals will be present, so we can assign irreps to each AO right away, in part because we assume the principal rotation axis (the one of highest order) is aligned along the z-axis:

Then, proceed by starting to form the standard MO diagram for a diatomic, but add the irrep labels to each AO:

Note that I haven't spaced the energy levels properly; the $\ce{1s}$ should be much lower than it is relative to the $\ce{2s}$. More on this later. Regardless, because this is a homodiatomic, all AOs will mix at each energy level, even the core $\ce{1s}$ AOs. Then, attempt to form the MOs: 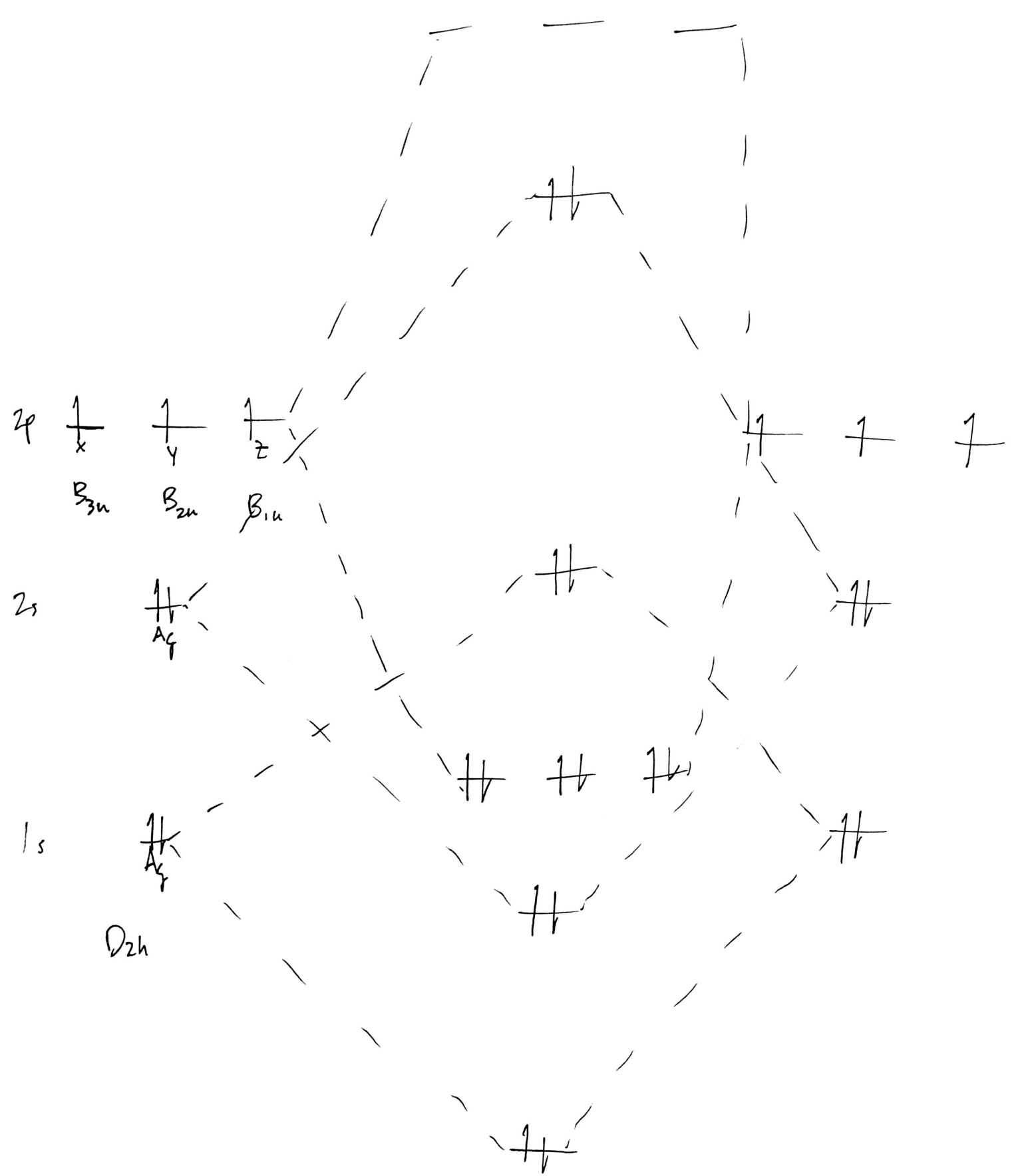 This is probably wrong, but it's a starting point. Again, energy levels will be discussed later. Finally, add symmetry labels to each MO, remembering that 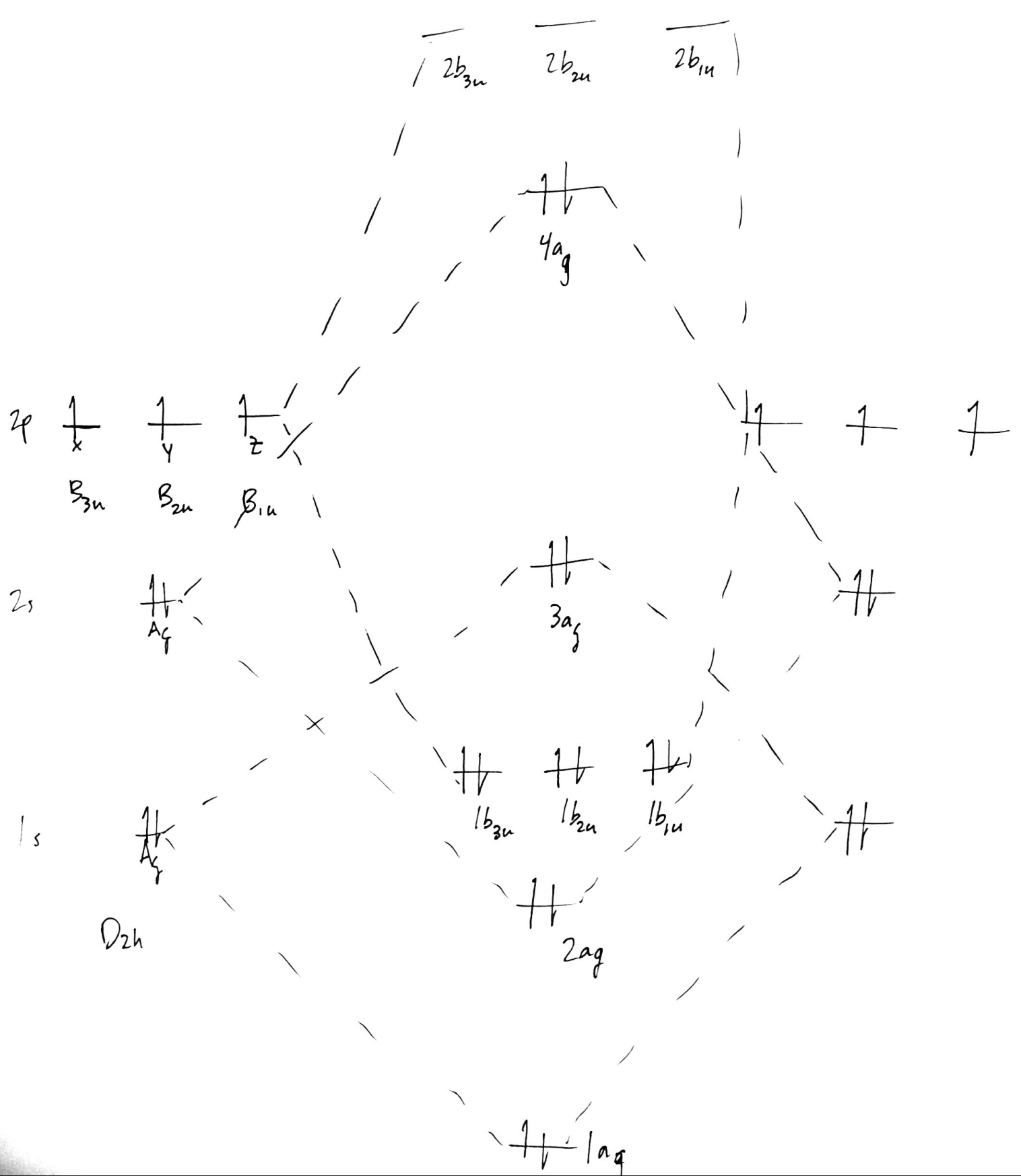 This is our final MO diagram for $\ce{N2}$. To form the diagram for $\ce{N2^+}$, remove an electron from $\mathrm{4a_g}$. This ignores orbital relaxation effects, but for the purposes of working this out on paper, it should be fine.

Now for the matter of relative and absolute energy levels. It is probably possible to get the correct relative ordering of the MO energy levels. Here, I assume that since AO mixes with an identical partner on the other atom, the splitting for $\ce{1s}$ would be the same as $\ce{2s},~\ce{2p_z}$, etc. Since I drew the $\ce{1s}$ too high, the $\mathrm{3a_g}$ is almost certainly too high, and perhaps should even go below what is labeled as $\mathrm{2a_g}$. The way to confirm this, and the only way to get absolute energy levels, is to perform a quantum chemical calculation. Since we've used a minimal basis for the drawing, we'll stick a minimal basis in the calculation. Here is a Psi4 input file:

and from its output:

It looks like I might have messed up the diagram, because the ordering isn't what's expected (why isn't $\mathrm{B_{1u}}$ degenerate with the other two p-orbitals?), and the virtual degenerate p-orbitals have gerade symmetry. Time to plot! 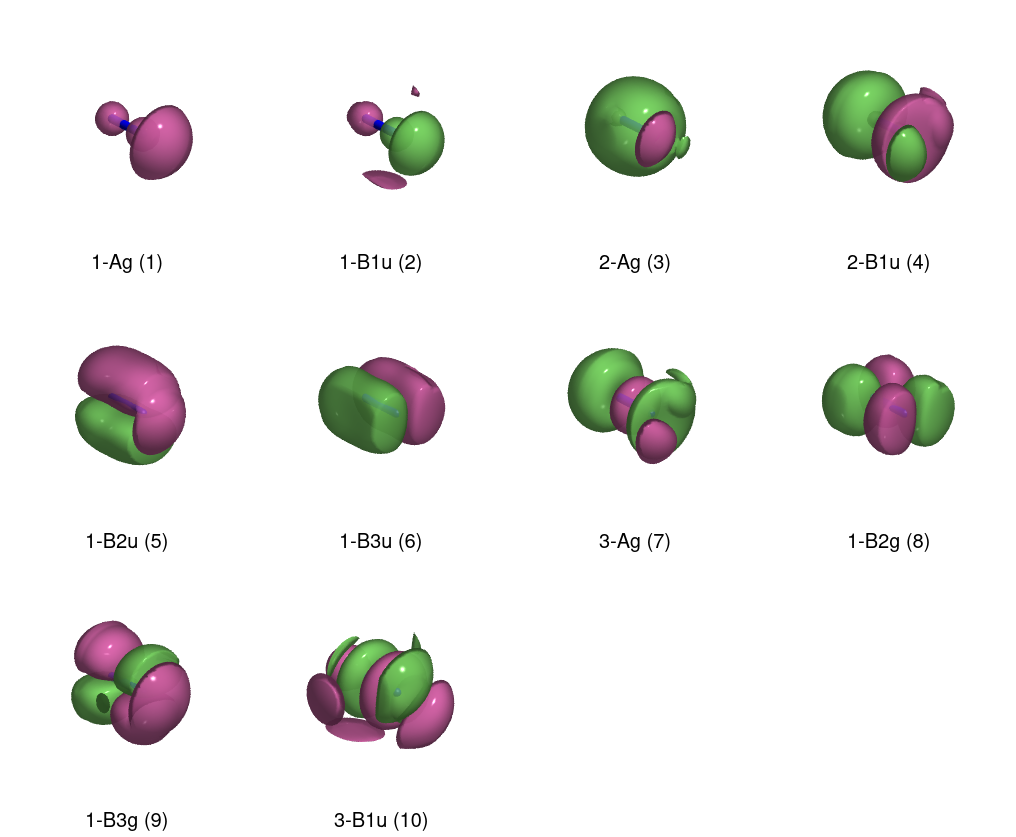 In my haste, I forgot an important point. When you make the MOs from AOs, you're making two linear combinations:

which means that an antisymmetric combination of two s orbitals will look like a $\mathrm{p}_z$ orbital. This doesn't fully explain everything, but is a good starting point. The lesson up to now is that while drawing the diagrams by hand is a useful exercise, it is not enough to do only that when the goal is to perform a correlated ab initio electronic structure calculation.

This is a correctly ordered molecular orbital diagram with $D_{2h}$ irreducible representations and energies included for every orbital.

The energy values and orbital ordering were get with a help of Psi4 script from pentavalentcarbon's answer. 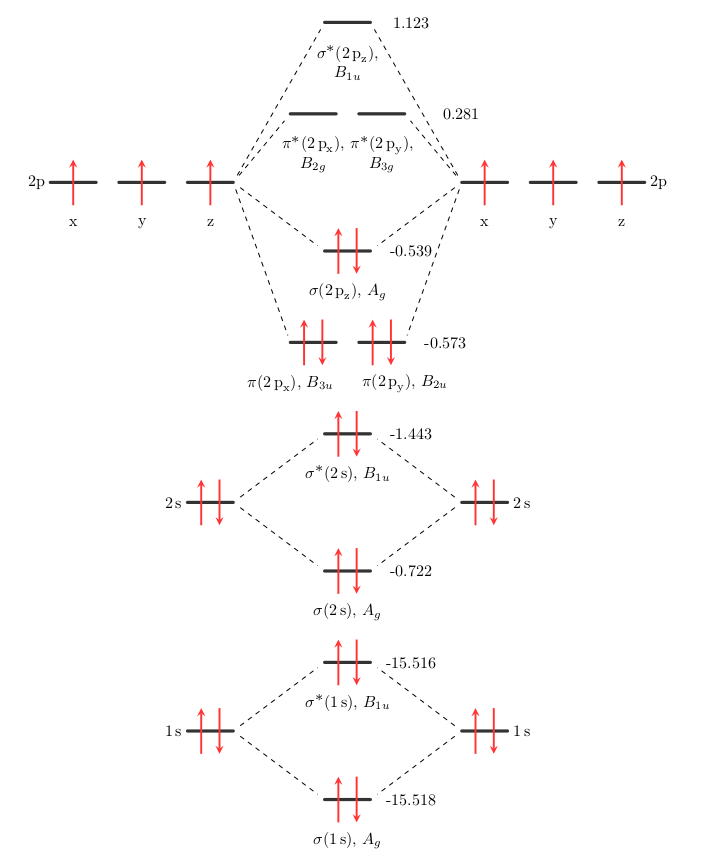 Not the answer you're looking for? Browse other questions tagged quantum-chemistry molecular-orbital-theory group-theory or ask your own question.