Explanation for the trends in nucleophilicity—Orbital interactions or electrostatic attraction

The reasons given by Solomons and Fryhle[1], and by Wade[2] are basically as follows.

What I don't understand is the trend of halide nucleophilicity in polar aprotic solvents.

In aprotic solvents, only the solvation factor is absent. Bigger anions are still more polarizable and can interact in a better way with the LUMO. Then, what is the reason for the trend reversal in aprotic solvents? Solomons and Fryhle[1] say

In these[aprotic] solvents anions are unencumbered by a layer of solvent molecules and they are therefore poorly stabilized by solvation. These “naked” anions are highly reactive both as bases and nucleophiles. In DMSO, for example, the relative order of reactivity of halide ions is opposite to that in protic solvents, and it follows the same trend as their relative basicity.

This is a rather intellectually-stimulating question and one that is also very difficult to answer. You have constructed a very good case for why the nucleophilicity order would not be expected to reverse in polar aprotic solvents, i.e. the order of intrinsic nucleophilicities of the halide ions should be $\ce {I^- > Br^- > Cl^- > F^-}$, based on the concepts of frontier molecular orbital interactions, as well as electronegativity and polarisability of the nucleophilic atom.

We can provide more quantitative justification for this using the Klopman-Salem equation$\ce {^1}$:

At the moment, all the evidence presented points us towards the conclusion that you have posited. However, we have overlooked the importance of a thermodynamic factor - the strength of the $\ce {C-X}$ bond.

On this topic of explaining the relative order of intrinsic nucleophilicity of the halide ions, Olmstead & Brauman (1977) had this to say$\ce {^2}$:

The intrinsic nucleophilicities follow the reverse order of the polarizabilities (e.g., $\ce {CH3O^-}$ > $\ce {CH3S^-}$ and $\ce {F^-}$ > $\ce {Cl^-}$ > $\ce {Br^-}$). This could be due to a stronger interaction between the more concentrated molecular orbitals of the anion with the carbon center. It could also be simply a reflection of the greater thermodynamic methyl cation affinities of the smaller anions.

It is important to note that Olmstead & Brauman are merely postulating the reasons. However, I do feel that the point on thermodynamics leads us on the right track to answering this question. On the other point of "more concentrated MOs", I am unclear of how it can be interpreted.

Let us focus now on this point.

How does thermodynamics even influence kinetics?

Well... It certainly does here. What are we concerned with when dealing with nucleophilicity? As it is a kinetic phenomenon, we are essentially concerned with the rate of the substitution reaction. This makes the consideration of the activation energy ($E_\mathrm{a}$) a particularly important one because the higher the $E_\mathrm{a}$, the lower the rate of the substitution reaction.

Here, the $E_\mathrm{a}$ can be taken to be the difference in energy between the reactants and the transition state. Thus, we can decrease the $E_\mathrm{a}$ by either raising the energy level of reactants or decreasing the energy level of the transition state. The reaction energy profile for an $\ce {S_N2}$ reaction is shown below, taken from ref. 3 (p. 394). 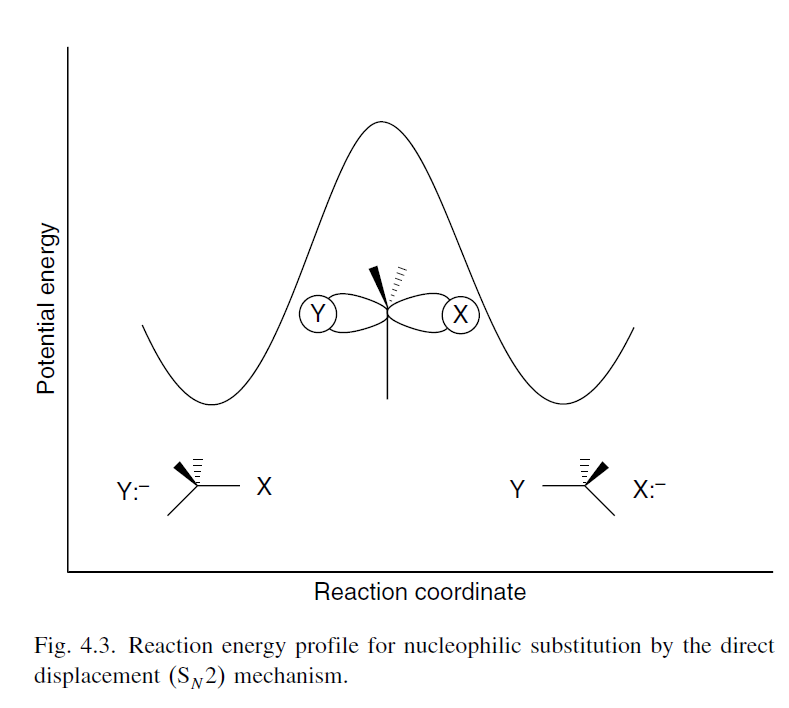 There are two ways to see how the strength of the $\ce {C-X}$ bond can affect the $E_\mathrm{a}$. I am not sure if they may be considered equivalent perspectives. Nonetheless, I will present both.

Because the $\ce {S_N2}$ process is concerted, the strength of the partially formed new bond is reflected in the TS. A stronger bond between the nucleophilic atom and carbon atom results in a more stable TS and a reduced activation energy.

The argument you have presented failed to consider the important thermodynamics factor. Thus, it resulted in the predicted reactivity of the halide ions in the reversed order. The takeaway here is that the application of the $\ce {HSAB}$ concept alone does not always produce the correct prediction.

More examples are cited for which the HSAB concept fails. These include:

In polar aprotic solvent, there is no possibility of formation of a hydrogen bond, to reduce the nucleophilicity of a nucleophile.

So, among halide ions, $\ce{F-}$ has the highest ability to donate its electron pair, and thus, act as a nucleophile.

Also, $\ce{F-}$ being the smallest faces less steric hindrance as a nucleophile.

In polar protic solvents since cations and anions are well solvated , attractive forces among the ions rupture due to which anions with higher solvation , i.e. high charge density have lower nucleophilicity than the anions with lower solvation, i.e. of lower charge density.

In polar aprotic solvents, only cations get solvated but not anions hence anion which forms stronger bond with carbon has higher nucleophilicty.