How sure can we be about the structure of purine?

I am not an expert on crystal structures, and I don't know how to read the .cif file correctly. I remember from my course on crystallography, that the positions of hydrogen are notoriously hard to confirm.
Can we therefore really be sure about this structure? Is there evidence in the crystallography data for a large disordering?

To provide a bit more context, I am asking this, because it is likely to change part of the answer I have given to the linked question. If there exists an equilibrium between the above protomers, then that would certainly make it even harder to find the most basic nitrogen in purine.

The article text (Ref.1) itself does go into details. The first thing to note: while aromaticity on the larger scale is retained in your structures 3 and 4, this is only true for the 10-ŽĆ-electron system as a whole. In many of these types of 10 ŽĆ systems made up of a six-membered and a five-membered ring, the two rings are not equal with the double bond in the five-membered ring often being much more susceptible to hydration. This prior thought should bias us against structures 3 and 4.

A pretty obvious first thought would be to take a look at the arrangement of individual molecules in the crystal structure. The paper does this in figure 3 which I have reproduced below. Wherever we expect the single proton, it should surely form a hydrogen bond to another purine molecule, meaning that these two nitrogens should be sufficiently close and in a favourable angle arrangement. 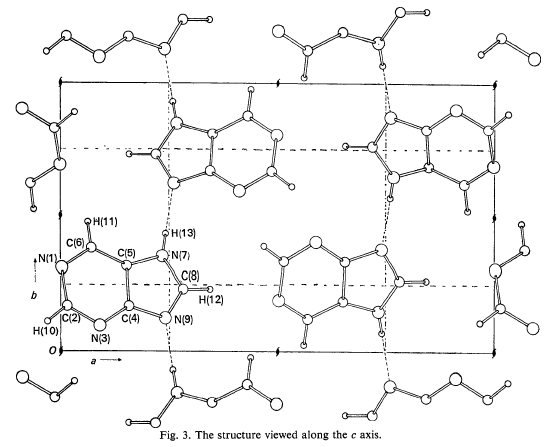 As the figure shows, the two nitrogens of the five-membered ring are in an arrangement that would suggest a hydrogen bond between them. The cut-off bits outside the unit cell are fragments of the next purine molecule not completed for brevity. This arrangement rules out 3 and 4 on the basis of no available hydrogen bonds and limits the discussion to 1 and 2.

As for the question whether the hydrogen prefers structure 1 or 2 this is admittedly more complex. As the authors note:

Since there is a possibility of tautomerism of the hydrogen between N(7) and N(9), particular attention was given to this problem. Two least-squares cycles, not quoted in Table 2, were computed in which a half-hydrogen was assigned to each of N(7) and N(9). Refinement of H(10), H(ll), H(12) and the two half-hydrogens resulted in the half-hydrogen attached to N(9) shifting to a position about 1 ├ģ from N(7) of the neighbouring hydrogen-bonded molecule.

So basically, during refinement Watson attempted to put the hydrogen on both nitrogens equally. However, the refinement would show that the partial hydrogen on $\ce{N}$9 was moved sequentially along the $\ce{N\bond{...}H\bond{...}N}$ distance towards $\ce{N}$7. Taking the final $\ce{N-H\bond{...}N}$ distance of $\pu{285pm}$ and the $\ce{N-H}$ bond at $\pu{85pm}$, this means that there are approximately $\pu{115pm}$ between the two possible hydrogen positions on $\ce{N}$7 or $\ce{N}$9ŌĆöand most of that was covered by the moving hydrogen. However, Watson also notes that the electron density corresponding to that $\ce{N-H}$ hydrogen was ŌĆśmuch more smearedŌĆÖ that those of the other hydrogens.

Sweet and Marsh arrive at the same conclusion using a different method that I did not fully understand.

All things considered, this gives us a pretty strong case that purine is best represented by structure 1 and that the principal tautomerisation structure would be 2 as that is where the hydrogen bond is directed.

Note: The authors state in the introduction to their paper:

This paper presents the results of two entirely independent investigations of the structure of purine (I).

The duplication of effort was discovered only when both three-dimensional studies were almost complete (Watson, 1964). Since different experimental techniques had been used, it was considered appropriate to publish both sets of results in the same paper and to make the necessary comparison between them. It has been a comfort to both parties that, except for systematic differences in the temperature factors, the two sets of results differ by less than their standard deviations.

This is why I focused so much on Watson and ŌĆśignoredŌĆÖ the other authors as the principal arguments are from WatsonŌĆÖs part of the paper.

Not the answer you're looking for? Browse other questions tagged acid-base crystal-structure molecular-structure or ask your own question.

3
How can ionic substances have an infinitely-repeating lattice structure?
7
How is knowing about the symmetry of a crystal useful
2
How can I solve a non-cubic crystal structure?
10
Geometry of the pentachloridoindate(III) anion
0
How can I find the smaller symmetric structure from big crystal unit cell?
12
Software to assist drawing of complex, three-dimensional skeletal formula from scratch or from existing crystal structure
6
Why does Samarium have such a large c-axis lattice constant? (>26 Ōä½) Are there significantly larger lattice constants of the elements?