Why is telluric acid dibasic? 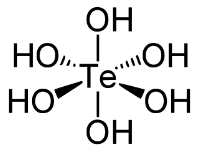 Two may be as many protons that a Bronsted-Lowry base as strong as hydroxide ion can remove. Building up more than two negative charges than that on the ion is a tough job. Possibly a stronger base, such as amide ion in ammonia, could do that.

That the basicity of the medium could impact how many protons can dissociate is nicely demonstrated by citric acid. Ordinarily it is triprotic in aqueous solution, but spectroscopic evidence indicates that at high alkali concentration (pH>14.4) a fourth, alcoholic proton can be removed. There would be no doubt with a base such as amide in ammonia.

Oscar's answer covers the realistic part perfectly, that there is no exact law on how far deprotonation can occur; the exact answer would depend on the conditions. That said, however, if you're given that telluric acid is dibasic (probably the question assumes mild conditions), and are then asked to justify why, the following is a theoretical explanation.

Telluric acid has an octahedral geometry. The first two negative charges (on deprotonation) would be formed on the two oppositely directed alcohol groups (to minimize repulsion) and be far from each other.

The third negative charge instead would be much closer to either of the two existing negative charges. This would cause repulsion and destabilize the anion. Hence, telluric acid won't deprotonate a third hydroxyl group under mild conditions.

6
What is the molecular structure of polymetatelluric acid?

4
What makes protons give the property of acidity?
1
Why is boron trifluoride a lewis acid?
11
Why can't phosphorus trifluoride be used as a Lewis acid catalyst in electrophilic substitution of benzene?
1
Volume of dibasic acid required to neutralise 0.04 mole of OH-
1
Defining an acid-base reaction from the perspective of the Arrhenius theory of acids and bases
9
Why is carbon dioxide considered a Lewis acid?
0
Lewis Acid / Base reaction for SO2 and H2O
1
Conflicting definitions of Lewis acids