Let's say I have a double bond between carbons 6 and 1 on a 6 carbon cycle (the numbering is imposed because of the positions of the suffix functional groups), is the bond numbered 1 or 6?

6 seems logical because it is not ambiguous (clearly if it starts on 6 it ends on 1), but usually you must minimize numbers (however numbering the bond 1 means there's ambiguity between it being between 1 and 2 and between 1 and 6).

I've tried finding the official rule but haven't managed to.

It might appear to you all of a sudden that there's an ambiguity, but actually there's none. Look at these two molecules carefully: 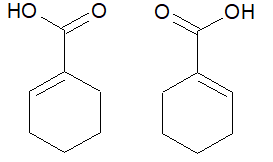 The disubstituted cyclohexene ring complicates the scenario, but only slightly. Consider the case when functional groups of equal priority are present: 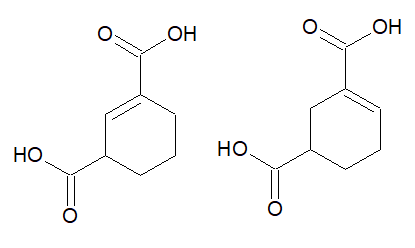 Now, recognize that - even before assigning a name - that both the molecules are different. Thus, their names will also be different. The molecule on the left begins numbering from the top $-\ce{COOH}$ and increases anticlockwise. The molecule on the right begins numbering from the lower $-\ce{COOH}$ and increases clockwise. The first pi bond is assigned a name "-1-en" while the other is assigned "-3-en".

If a lower priority functional group is present instead, like so: 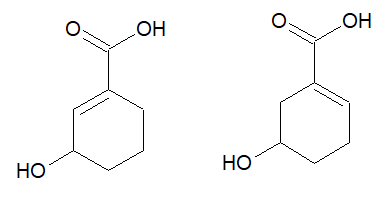 A possible way to achieve a "-6-en" is to take equal priority suffix groups on positions 1, 2 and 4, and then place a pi bond between positions 1 and 6, like so: 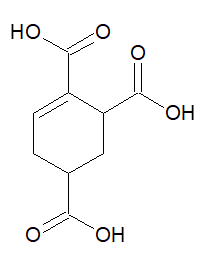 It is named "cyclohex-6-ene-1,2,4-tricarboxylic acid" giving the suffix functional groups a lowest locant set of "1,2,4", consequently naming the alkene as a "-6-en". Actually, though, this is not 100% correct. A slightly technical detail is missing, which can be found in Loong's answer.

I've tried finding the official rule but haven't managed to.

Names with the highest locant for the double bond such as ‘cyclohex-6-ene-1,2,4-tricarboxylic acid’ are formed analogous to the names of usual unsaturated cyclic compounds. This might be considered common sense. Also, most known chemical structure drawing programs understand and generate this name for this example.

Somewhat surprisingly, however, such names are not in accordance with IUPAC recommendations. And this does not only concern the last (2013) edition but also the now obsolete previous editions. The corresponding rules in past and present editions are as follows.

When, in cyclic compounds or their substitution products, the locants of a double bond differ by unity, only the lower locant is cited in the name; when they differ by more than unity, one locant is placed in parentheses after the other (…).

Only the lower locant for a multiple bond is cited except when the numerical difference between the two locants is greater than one, in which case the higher-numbered locant is cited in parentheses (…).

Only the lower locant for a multiple bond is cited, except when the numerical difference between the two locants is greater than one, in which case the higher locant is enclosed in parentheses.

Explicit examples given for the case when locants differ by more than one are bicyclic compounds; nevertheless, the rules are unambiguous also for simple cyclic compounds.

Remarkably, I found only one program (MarvinSketch) that automatically generates this name.

When using general IUPAC rules for locant number minimization, one might be tempted to use the compound locant for some rather simple cases like multi-substituted cyclohexenes, like

Why ‘cyclohex-1(6)-ene-1,2,4-triol’ is most likely wrong might be concluded from the following rule

P-31 MODIFICATION OF THE DEGREE OF HYDROGENATION OF PARENTHYDRIDES

(1) a minimum number of compound locants. A compound locant is used for a double bond if the locants of the atoms at each end of the bond do not differ by a value of one. When a compound locant is required, the higher locant is cited in parentheses. A benzene ring is shown and described as a cyclohexatriene corresponding to the Kekulé structure. Other aromatic rings are treated similarly, When required;

Note: The seniority of single locants over compound locants was established in 1989 for numbering steroids [see S3-2.5(2), ref. 16] and extended to von Baeyer systems in the 1999 publication on von Baeyer nomenclature (see VB-8.3.1, ref. 7).

which however applies for polycyclic rings.

So, IUPAC organic nomenclature rules tend to avoid these compound locants where it's possible. But, as Ivan Neretin has stated in his comment, for monocyclic compounds, there even is no ambiguity at all.

I'd add: … if there was a rule stating, that the compound locants for ‘ene’ position can be applied only for branches.

14
Use of Δ (delta) to describe alkenes