Does this C17H28 isomer exist?

Can anyone tell me what this $\ce{C17H28}$ molecule is? Has it been synthesized? Does it have a name?

I was just interested in the molecule because it looks interesting.

This compound (formally called "hexadecahydronaphtho[1,8-de]naphthalene", but in common parlance also "[6.6.6.6]fenestrane" - thanks Mithoron!) has never been actually synthesised before, but some of its properties have been studied computationally.

It does not particularly matter, but it is worth pointing out that this compound possesses stereochemistry which was not indicated in your original drawing. Hence your question is essentially asking about a collection of stereoisomers. 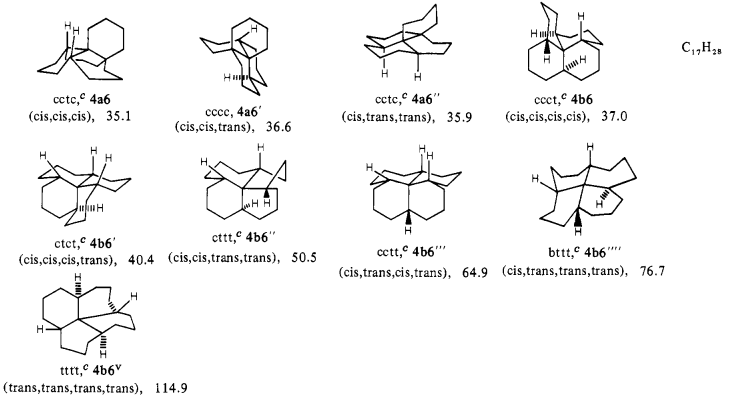 Gund and Gund1 investigated the strain energies of a few $\ce{C17H28}$ isomers, shown above, using empirical force field methods. The compound you are interested in is 4b in the scheme (the various 4a are constitutional - as opposed to configurational isomers - of 4b). The numbers next to the names are the strain energies in kcal/mol. The higher the energy, the more strained; hence it seems that 4b, if synthesised, would be generally thermodynamically unstable with respect to 4a (kinetic stability is of course entirely separate). The letters 'c' (chair), 't' (twist boat), and 'b' (boat) refer to the conformations of each six-membered ring in the structure. The labels cis and trans refer to the relationship between each neighbouring pair of fused six-membered rings.

The potential for systems containing fused six-membered rings to undergo "ring flips" was also investigated computationally (using DFT) in a recent paper by Alder et al.2 In particular, the authors were interested in the all-cis isomer of your compound, i.e. ccct/4b6 in the screenshot above - which incidentally has a rare $S_4$ symmetry. They found that inversion has a whopping barrier of +88.9 kJ/mol (B3LYP-gCP-D3/6-31G*//B3LYP/6- 31G*) - almost double that of cyclohexane (~45 kJ/mol). The authors conclude that this isomer of [6.6.6.6]fenestrane "probably has the highest inversion barrier for any nonpolymeric multi-ring structure built from cyclohexane rings".

Although the compound has never been made, the authors propose that at high temperature the inversion process (which interconverts equatorial and axial hydrogens) may be studied by NMR spectroscopy. However, due to the significantly slower rate of inversion relative to cyclohexane, temperatures of 100–200 °C would be needed (as compared to cyclohexane which requires low temperatures for NMR studies).

20
A monocyclic 6 carbon ring with 6 double bonds
7
Polar rearrangements: What is this reaction called?
38
Five-pointed crown alkane C25H40: does it exist?
5
Have the STRUCTURES of synthesized anthropomorphic molecules (nanoputians) been verified experimentally?
4
What would this unsaturated cyclic compound be called?
4
What would you call the polymerised sheet-like polymer arising from Fittig reaction of 1,3,5-trichlorobenzene?
20
Why does the image of cyclo[18]carbon look like a nonagon?