Solubility of oxygen in liquid hydrogen; is anything near 1:2 (molar ratio) possible?

In a question on another Stack Exchange site a proposal was forwarded to premix oxygen and hydrogen in the stoichiometric molar ratio of 1:2 to be used as rocket fuel, as opposed to the standard method of storing each liquified gas (LOX, LH2) separately.

According to Wikipedia (here and here) the freezing and boiling points of oxygen (presumably at standard pressure) are around 54 and 90 Kelvin, while those of hydrogen are around 14 and 20 Kelvin, respectively, suggesting that oxygen would freeze well before gaseous hydrogen would condense into a liquid.

However, one might (naively) wonder if oxygen might still exist as a solution in liquid hydrogen at some useful fraction, and at a pressure of roughly one atmosphere or less for practicality of storage on a weight-conscious rocket.

Even the wording of this abstract makes this sound fairly unlikely, but without some confirmation from someone more knowledgable it's hard to address the other linked question.

It would be the other way round. Since the oxygen is the first to liquify, it would be hydrogen dissolved into liquid oxygen.

In this article they show the following calculated vapour liquid equilibrium diagram. 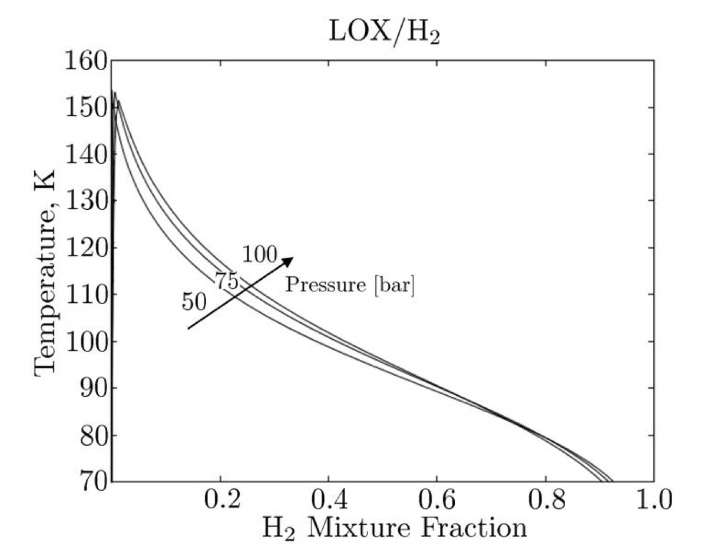 1
Get the molar mass of an unknown liquid in a dissolution
20
Can a stoichiometric mixture of oxygen and methane exist as a liquid at standard pressure and some (low) temperature?