Hepworth, Waring and Waring (2002) mentions that:

They then go on to say:

Methoxybenzene (anisole) is reduced more rapidly than benzene under Birch conditions. This is an exception to the rule, the reasons for which are not clear.

Why is this the case? Does anyone know of any possible explanations?

Also, I was thinking, since the methoxy group donates electron density mesomerically to the ortho and para positions, wouldn't it be unfavourable for the carbanion to form that the ortho positions? This seems to happen in the mechanism shown above.

Lastly, I understand that the dispute between whether it is "Mechanism O" or "Mechanism M" was settled a while ago but I've read that the evidence pointing to "Mechanism O" seems to be computational studies and experiments. However, there has yet to be any qualitative explanations, based on chemistry principles and concepts, as to why "Mechanism O" is the one which occurs to a greater extent. I was wondering if anyone knows of any such explanations?

Chemistry is an experimental science supported by computational methods. Qualitative explanations for reaction mechanisms follow as a result. More on that issue later.

The mechanism of the Birch reduction has been investigated by Zimmerman and Wang.1 What are the experimental results? The Birch reduction is first order in substrate, electrons and alcohol. Therefore, the rate-limiting step is the protonation of the radical anion 2 of anisole 1. Based on the observation that the dianion of anthracene is more basic than its radical anion, 2 the authors designed an experiment utilizing 2% d1-t-BuOH as the alcohol source. The argument is that the radical anion, which is less basic than the anion, will be more discriminating,3 favoring protonation rather than deuteration (isotope effect). The more basic anion, 4 or 7, which is less discriminating, will give rise to a higher D/H ratio. Employing deuterium NMR, the meta position in 8 was found to have 7-times the amount of deuterium than the ortho-position. Thus, the ortho-position (2a --> 3) is protonated first; mechanism O (ortho) predominates over mechanism M (meta). --continued-- 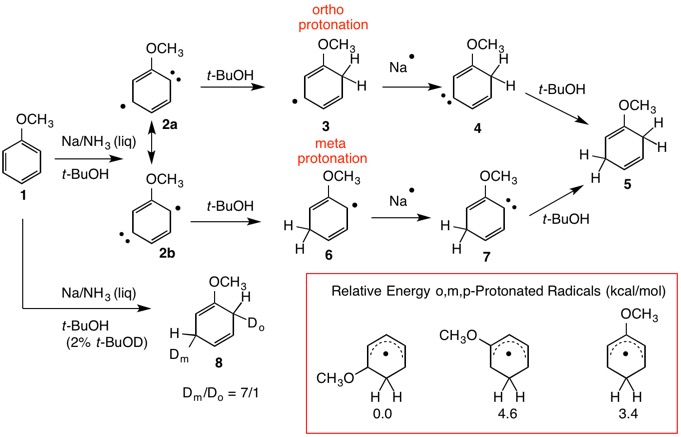 Calculations showed that the methoxy ortho-substituted cyclopentadienyl radical is more stable than the meta- and para-isomers (red box). But your request was for a qualitative rationale for preferring radical 3 over 6. Radical 3 has an advantage over radical 6 because radical 3 may be written with the radical on the ipso-carbon, the same radical that would be expected to be generated by auto-oxidation of 5-methoxycyclohexa-1,3-diene. Cross-conjugated radical 6 does not have this option.

3) Consider by analogy that chlorine atoms are less selective than bromine atoms in the radical halogenation of alkanes.

Not the answer you're looking for? Browse other questions tagged organic-chemistry reaction-mechanism aromatic-compounds organic-reduction or ask your own question.