Most activated position on para-terphenyl for EAS

Para-terphenyl: it doesn't look pretty with all those math-y numbers, but those are going to come helpful in answering my question!

A question asked me to tell the expected product when this reacts with $\ce{Br2/FeBr3}$. Now, I have done such questions with all types of fancy organic molecules ranging from benzene to picric acid to parantiroanisole etc. I know that I am supposed to find the most activated position1 for EAS. But I have never done more than one phenyl ring at once.

So, in this question, I have drawn the eight resonating structures (without charge separation) of paraterphenyl manually. Here they are:

But, as you can see, every position seems to be activated identically. Each position has their own share of electrons through a pi bond, but it ends up being completely symmetric.

So, how do I find the most activated position in this compound?

1:Clarification: By "most activated position" I mean the position with maximum electron density. For example, in aniline, those are the ortho and para positions.

So, how do I find the most activated position in this compound?

I've drawn just a few of these resonance structures in the following diagram. 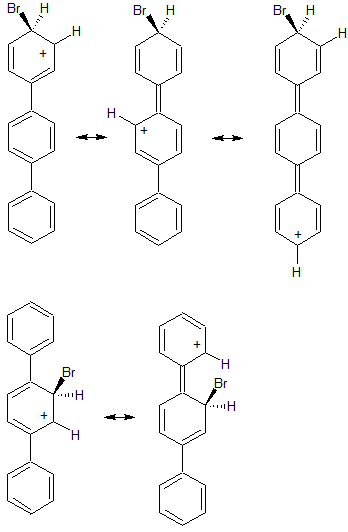 This suggests that based on resonance effects, electrophilic attack on a terminal benzene ring would be preferred over attack at the central benzene ring.

Further, we would expect ortho and para attack on the terminal rings to be preferred since the phenyl substituent acts as an activating o-p director in electrophilic aromatic substitution. The rate of attack at the ortho position might also be decreased somewhat due to the steric effect of the adjacent phenyl (actually biphenyl) substituent.

In a paper by Shafig and Taylor (J. Chem. Soc., Perkin Trans. 2, 1978, 0, 1263-1267. DOI: 10.1039/P29780001263), they explore your question by studying the electrophlic protonation of tritiated p-terphenyl. After correcting the rates for statistical effects (e.g. there are twice as many ortho positions on the terminal rings as there are para positions) they find that:

These results support our predictions that

Not the answer you're looking for? Browse other questions tagged organic-chemistry aromatic-compounds regioselectivity or ask your own question.

16
How to determine the worst resonance structures out of a given set?
2
How is the acetoxy group ortho/para-directing in electrophilic aromatic substitution?
1
Choice of Lewis Acid for EAS reaction
5
Most activated position for Electrophilic addition in substituted biphenyls
2
Selectivity of diazo-coupling with p-amino phenol