Why does the alkyl group anti to the hydroxyl migrate in Beckmann rearrangement?

Background: Many organic reactions involve the migration of an alkyl group from one position to the adjacent one. The migration of the alkyl group is decided by its migratory aptitute i.e. electron-richness. It generally follows the priority order of hydride > phenyl > higher alkyl > methyl.

Main question: The Beckmann rearrangement also involves an alkyl migration. However, this migration is not governed by migratory aptitude. In fact, the $\ce{-R}$ which is in anti-position to the hydroxyl group in the oxime migrates, irrespective of its migratory aptitude! My question is why is this so? And are there other organic reactions which have such a rule for alkyl migration?

MasterOrganicChemistry and Wikipedia don't even mention the word "trans" or "anti" anywhere. My textbook obviously doesn't mention anything either, hence I am driven to ask this question.

Oximes can undergo the Beckmann rearrangement. Oximes also exist as stable syn and anti isomers. In the figure below, $\ce{R_1}$ is anti to the hydroxyl group; another isomer exists where it is syn the the hydroxyl group. 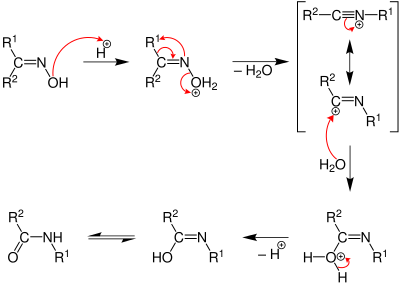 There are many reactions showing this geometric preference, the Baeyer-Villiger oxidation being an example.

7
Why does alkyl rearrangement happen in the Hofmann rearrangement?
6
Explaining stereochemistry in a sigmatropic 1,3-alkyl migration
3
Rearrangement of an oxyallyl cation
0
Is 1,3 alkyl shift allowed in Cyclobutyldicyclopropylmethylâ€‰Cation?
9
Effect of substituents on arene oxide-phenol rearrangement