The Wikipedia page for deuterium oxide (heavy water) says that its boiling point is 374.5 K and the one for ordinary water is 373.13 K.

Is there a way of distillation which we can use to enrich deuterium oxide?

Fractional distillation can work, but the separation per round of distillation is very low so you would need a very large multi stage process to achieve significant separation.

Nobody uses direct distillation to produce heavy water as there are better chemical processes that achieve higher enrichment per stage, for example the Girdler sulphide process.

For a comparison of different methods, including distillation and the Girdler processes, have a look at Heavy Water: A Manufacturers’ Guide for the Hydrogen Century

In this 14 pages document a survey of the different available processes is given. The distillation of water, as suggested by the OP is included. That process is the easiest but requieres huge energy input to perform. The distillation must be done under vacuum because the separation factor is higher than at normal pressure.

The processes that are used are based on exchange reactions. Among these the most used is the Girdler process based on $\ce{H2S}$ but other possibilities exist. However, this is the only one that does not require a catalyst.

Other processes are also considered briefly. An interesting point is that the estimated cost of production is given as 300 \$/kg $\ce{D2O}$.

A table with the characteristics of the different processes is included. 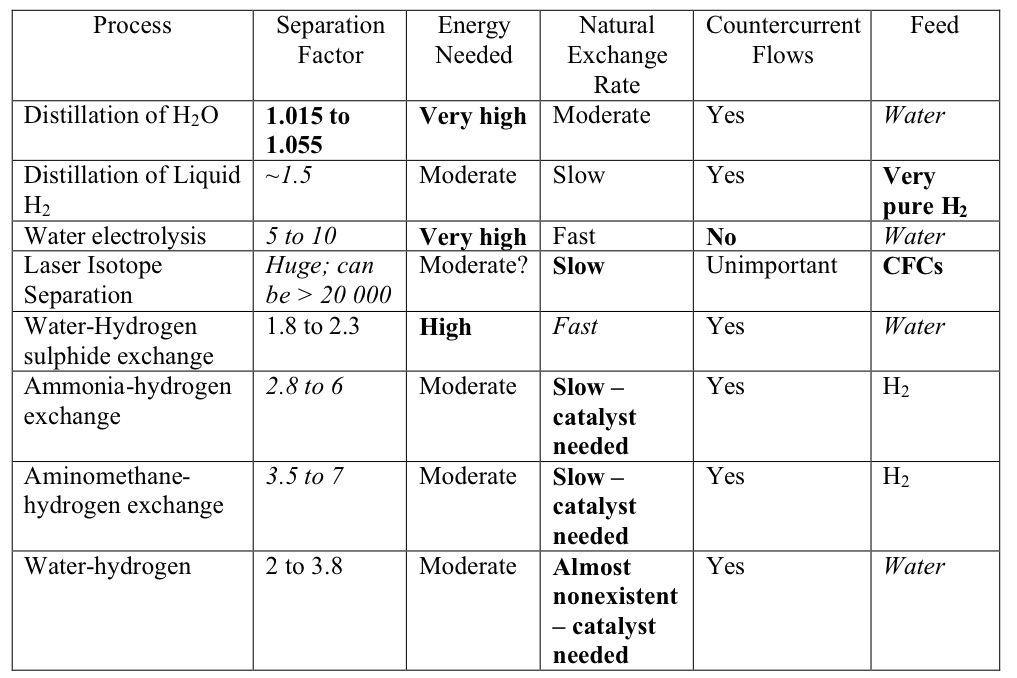 Not the answer you're looking for? Browse other questions tagged boiling-point distillation or ask your own question.

10
Why is the boiling point of heavy water more than that of normal water?
3
Freeze distillation: Does efficiency depend on solubility?
9
Do light and heavy water form an azeotrope?
3
Distillation: temperature not reaching azeotrope boiling point
0
Why is the temperature graph sigmoidal in simple distillation of components with very different bps?
1
Can the enrichment of Uranium be done via manipulating the boiling/melting point difference between differing isotopes of the same element?
0
How many boiling points does a mixture of liquids have?