Why are there no dihedral mirror planes in the D3h point group?

Consider the molecule $\ce{BH3}$, which belongs to the $D_\mathrm{3h}$ point group. Why are the three mirror planes in this point group labelled as $\sigma_\mathrm v$ instead of $\sigma_\mathrm d$? Don't they bisect the angles between a pair of rotational axis $C_{2}$ axes as shown in the diagram below? 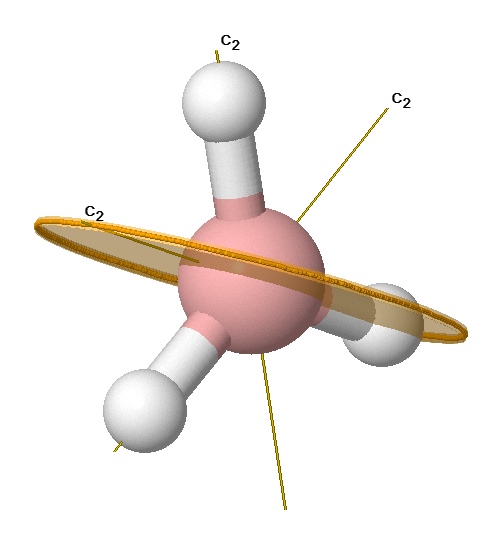 The σ$_v$ planes in a molecule are a direct result of the C$_n$ main axis i.e. they are interchangeable if you perform the C$_n$ operation on them. On the other hand σ$_d$, which are called dihedral planes bisect the dihedral angles between members of the σ$_v$'s set. Therefore molecules with odd C$_n$ such as BH$_3$ wont have any σ$_d$ planes; only n (3 for BH$_3$) σ$_v$'s. In contrast a molecule such as benzene which has a C$_6$ main axis will have 3 σ$_v$'s (the ones including the carbon atoms) and 3 σ$_d$'s which are the ones passing between the carbon atoms. Of course it doesnt really matter which set is called dihedral and which is called vertical, it could be the other way round as well. Ref: Chemical applications of group theory by Cotton.

2
Symmetry C3V For MeCl
9
Identifying the C3, C4, S4, and S6 symmetry operations in the Oh point group
3
Deriving the irreps of the d-orbitals under C3 and S6 operations in octahedral symmetry
17
Why do we need the identity operator, E
7
XeF4 - why are there only 2 dihedral mirror planes?
13
Relationship between the symmetry number of a molecule as used in rotational spectroscopy and point group
1
Horizontal symmetry plane of cis-dichloroosmiumtetracarbonyl
12
How are there two C3 rotation axes in ammonia?