Question about the Law of Definite Proportions

If we know that:

My question is: why is that in the second case where we doubled the amount of oxygen we don't get double the amount of the first case (2 times carbon monoxide)

Or why don't we get the same amount of carbon monoxide and the remaining mass of the products is simply oxygen that didn't form any bonds.

Basically, what forces the reaction to occur in a certain way just because the proportions are different but the elements are the same.

In reality, there is not a sudden changeover of $\ce{CO}$ to $\ce{CO2}$ production when the oxygen supply is increased. This is the reason that all dwellings should have carbon monoxide detectors.

As an example, along with $\ce{CO2}$, gasoline (petrol) engines commonly produce 3-7% $\ce{CO}$ before additional air is injected.

The amounts you cite are how much oxygen is in pure samples of each gas, but producing either gas often requires filtering out traces of other gases that were also made in side reactions.

Producer gas is a fuel made by the incomplete oxidation of carbon (from coal or other source, sometimes with the addition of water) and contains both flammable $\ce{CO}$ and nonflammable $\ce{CO2}$ (and $\ce{N2}$ from the air supply). During fuel shortages, gasifiers were cobbled onto vehicles to enable them to run on this type of fuel. 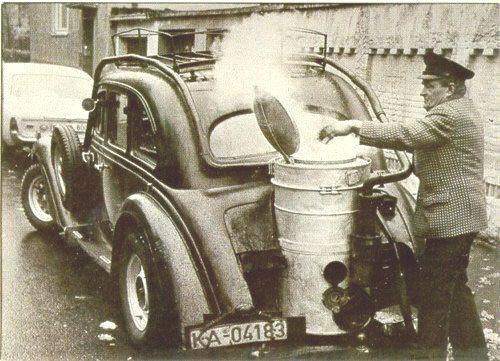 To supplement to DrMoishe's excellent answer, I'll tackle this part of your question:

In your case also, you need to double the amount of both oxygen and carbon.

As DrMoishe Pippik has pointed out that the net reaction is different in reality.
However, I assumed that you were asking in theoretical chemistry. In this case, in low oxygen condition, Carbon reacts with oxygen to form carbon monoxide with the rate of 2:1 (mole of carbon:mole of oxygen). In free-Oxygen condition, firstly the surface area of outer carbon layer doesn’t have enough oxygen to react with, resulting in the presence of carbon monoxide. Then, there are still unused oxygen, both the remaining carbon and the new carbon monoxide react with oxygen to form carbon dioxide.
P.S: This is my first answer on StackExchange. Please point out any problem or misspellings, thank you!

Not the answer you're looking for? Browse other questions tagged physical-chemistry everyday-chemistry experimental-chemistry bond or ask your own question.

3
Why is the boiling point of water and ammonia so different?
2
Peculiar behaviour of tea boiling as milk+Water
4
What is physically responsible for different compounds with the same types of atoms?
3
Why do you use catalysts if they increase the rate of forwards and backwards reactions equally?
2
Can somebody please explain this statement (about the greenhouse effect)?
2
Using drip extraction, how much caffeine is extracted from coffee as a function of the amount of water used?
1
Extrapolating from a calorimetry lab to find a new delta T with different volumes and grams of substance
0
Why does bubbling carbon dioxide through calcium hydroxide result in a precipitate?